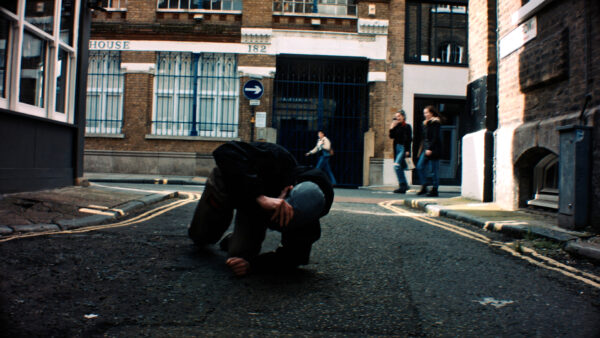 It may seem the global pandemic has made our lives unpredictable. In fact, a sense of adventure is one of the most vital things currently missing from our existence, from meeting strangers to discovering alleyways that you had never seen before and ending up in situations that you had not anticipated. With a new video for ‘Doomswayers’, the title track of their recent sophomore EP, London quartet Legss bring an ode to peril and hazard.

Equal parts vitriolic post-punk and eerie electronics, ‘Doomswayers’ feels like a three-part horror story that is oddly beautiful. There’s a sadness, but also an unhinged kind of joy to the cynical opening observations about ‘the man on the street’ that frontman Ned Green delivers over a macabre guitar arpeggio. The dusky second act brings some sense of peace and quiet, with repetitious synths that slowly but surely turn more melodic. The calm does not last long too, as the track seems to rewind and a dynamic drum beat launches the listener into a grand finale in which guitars screech like sirens and Green trades his murmur for a roar.

Then, of course, there is the video, which was filmed by Rory Edmonds and Mollie Gallagher, and directed by Luke Kulukundis and Legss themselves. While clearly taking its cues from the song, it also tells a whole other story, although there doesn’t seem to be a definite narrative. Whether the viewer is watching the lead character stumble through the streets of London, experiencing some ripples in the space-time continuum in the process, or go under in an abyss of pitch-black water and guitar feedback, it never becomes obvious if we are dealing with a protagonist or an antagonist here. Maybe, in this particular and peculiar story, not knowing is precisely the point.

Ned Green sheds some light: “The video for ‘Doomswayers’ is the concluding statement from our EP. A sprawling, epic, emotionally-charged, scatty, nauseating, vitriolic visual accompaniment, set in a 17th Century, modern, time-warped LondWinium-by-Sea, to a three-part throwaway Violin Concerto in D Major, found in a tip and then transcribed into the six-minute title-track EP-closer that you can all love, listen, and now watch, today.”

Legss’ ‘Doomswayers’ EP is out now and you can pick up a copy via the bands Bandcamp here.