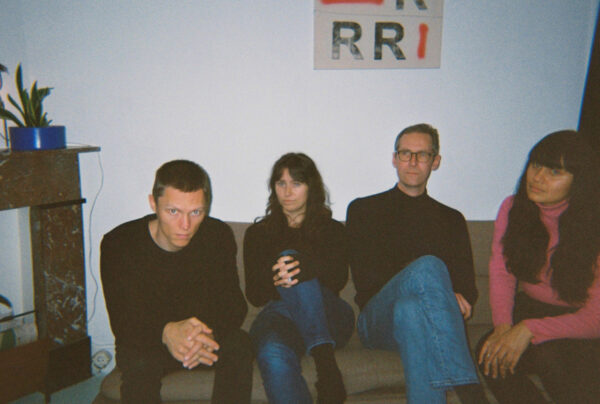 Over the past three years, Lewsberg have steadily become a stalwart of Rotterdam’s flourishing scene. Throughout those years, Lewsberg have sometimes given off the impression of an immovable object, a seemingly static unit not known for its vivacious live shows and sudden sonic changes. Don’t be mistaken though, their intriguing single ‘Sweets’ offers new evidence of Lewsberg’s constantly inquiring spirit.

From their offset, Lewsberg have always maintained a healthy distrust from the music industry and those who think about music in terms of careers. Here’s a band with virtually no social media process, who  don’t seek to be commercially viable or in vogue, but who only change when it feels interesting, or necessary from an artistic point of view. When their music changed, Lewsberg have always presented the music as is- not trying to convince people, just leaving the door open for listeners willing to get used to their contrarian tunes. Tunes in which the mundane, functional and ugly are elevated, mirroring the band’s hometown.

‘Sweets’ then, is a prime example of Lewsberg’s ever growing belief in the adagio: ‘less is more’. There’s a minimalism at play here that infuses this short, and indeed sweet song with the feeling that it may fall apart any second. However, employing only a drum sampler, a simple guitar riff, and the deadpan delivery of Arie van Vliet – who has never shied away from his Dutch accent – Lewsberg manage to conjure up a complete story on this cut off their last record ‘In Your Hands’.

Or perhaps, the feeling of a complete story is a better way to put it, as Lewsberg have made a habit of leaving certain things untold or unseen. There’s definitely an uneasy feeling to this tale of consumerism, but Lewsberg wouldn’t be Lewsberg if the band didn’t remain seemingly stoic in the face of turmoil. While fellow Rotterdam outfits like Tramhaus and Vulva wear their activism on their sleeves, Lewsberg succeed in playing with layers of nuance, aloofness and sarcasm, even in their most unadorned songs.