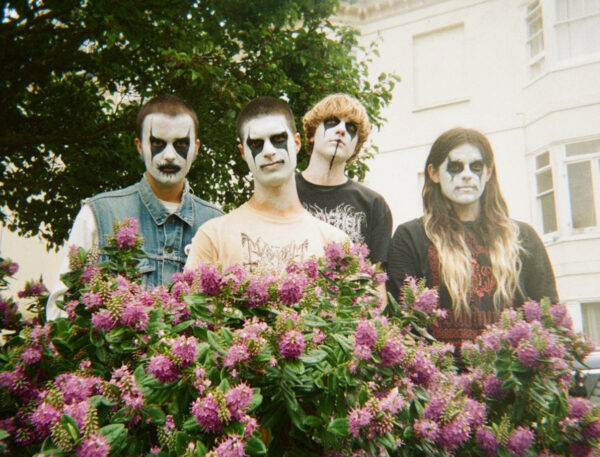 True to the daydream-y air of their namesake, Island Of Love are an amicable bunch of newcomers whose journey so far has been forged out of unabashed friendship, and scuzzy specs of sun-kissed escapism.

Initially going by ‘Love Island’- that is, in their own words, until “Linus didn’t make it through the audition process for the show so we jumbled it around a bit”, the Lo-Fi leaning “Fuzz Pop” quintet eventually settled with the somewhat cosmic sounding: Island Of Love. A sore subject for some, and a blessing for those of us keen to avoid searching ‘Love Island Band’ every time we’re looking for some ‘Big Muff Pedal’ action.

Having spent their formative years playing in a variety of London based Punk, Hardcore and Metal bands, guitar and vocalists Karim Newble and Linus Munch would share the odd demo with each other before collaborating on a “seven song demo” which would eventually become the groups debut release. Completed by Daniel Alvarez Giraldo on bass, and drummer Jimmy Guvercin, Island Of Love wasted no time getting their shit together and doing what all Twenty-One-year olds do best: “mostly just hang out with each other and discover new music.”

After perfecting their distinctively fuzzed-up-and-contemplative sound to the nth degree of ‘bliss-out’, in March 2020, Island Of Love released their now sold out ‘Promo Tape’. Recorded at East London’s ‘Fuzzbrain Studios’ with close pal Ben Spence (“effectively a 5th member of the band at this point”), ‘Promo Tape’ is a twenty-minute documentation of complete and utter cool. Tactfully combining the groups collective and individual interests, with added bursts of melodic mount. If you’ve ever engaged in a bit of stoner-cloud-watching on a late summer’s afternoon, this is undoubtedly something for you.

Much like the ever charming ‘Slacker’ nature of American-alternative acts of the ‘80s and ‘90s (Dinosaur Jr., and Guided By Voices to name a few), ‘Promo Tape’ was predominantly written between the family homes of Newble and Munch; eventually being picked up by the Oakland based Indie label ‘Smoking Room Records’- a cassette and re-issue focused label home to a variety of the bands favourite artists, including Duster, No Trend and the Vancouver based ‘Stoner-Gaze’ act: Weed.

Sticking to the innately illustrative aesthetics of their ‘DIY’ roots, ‘Promo Tape’s’ cover-art was designed entirely by Newble, and showcases an endearingly handcrafted side to Island Of Love that can only be described as: ‘their music sounds exactly like their artwork’. Taking its name from the original concept behind ‘Love Island’ (the band), ‘Promo Tape’ sees the group attempt to create something that “people would read as an audition”; perfectly capturing the restlessly adolescent energy of artists at the beginning of their careers, with surprising depth and maturity. 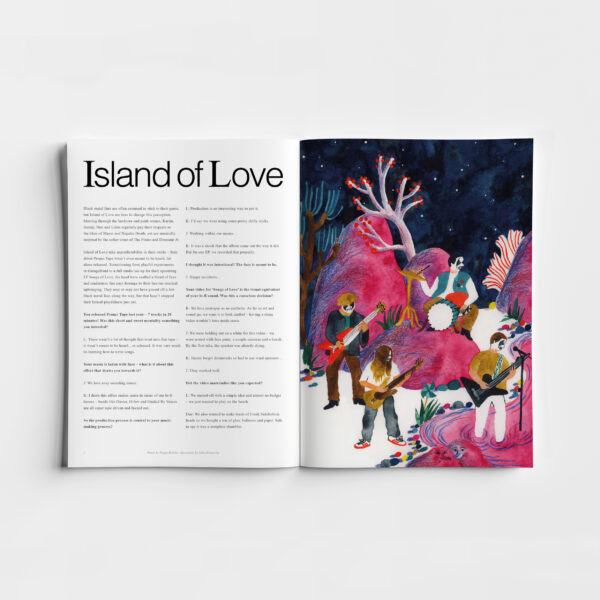 Island of Love in Issue Thirty-Four of So Young

It would be a huge understatement to note that Island Of Love hold a lot of sentiment towards their beloved Fuzzbrain Studios– a vital, and unbeatable force in London’s underground music scene (the original location was tragically burned down in a fire, and has since relocated). Fuzzbrain, for all its worth, is a creative-safe-space that encourages those who step through its doors to explore and expand their creative boundaries, under the omniscient guidance of Spence. “He’s what’s enabled us to turn a bedroom project into an actual band”, note Island Of Love, “and has put up with us learning and creating in his studio since most of us were sixteen.”

Whether it’s their now-iconic performance at the newly opened Third Man Records store in London, or, running around Brighton beach whilst all-dolled-up like Kiss (the tongue-in-cheek edition) for their ‘Songs Of Love’ music video, it’s safe to say that Island Of Love are on a trajectory entirely of their own making. Choosing to take a “more collaborative approach” to future endeavours, and with news that their debut EP ‘Songs Of Love’ is due to grace our hearts and souls sometime this year, it’s safe to say that 2022 will be the year of Island Of Love.