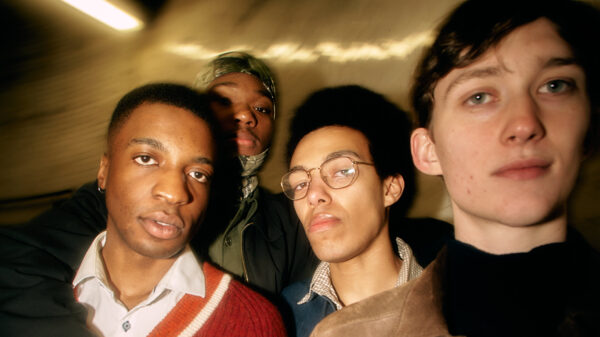 The 90’s sound revival is in full effect with ‘Round the Bend’, the newest offering from Malady. With beats plucked straight from the classic rave scene, it runs at the speed of the trains that gun across the cityscape, taking the nighttime revellers from Dalston to Peckham Rye to Clapham to Camden and back. It’s the slalom through crowded central London streets at rush hour. It’s dancing in a sweaty crawlspace with mouths open and heads tipped back.

The lyrics focus on the return, on cyclical behaviour, on repeats and relapses and going backwards before moving forward again. We live in an age of craving all the euphoric highs through all the deepest lows, and life is about winding your way through both. Percy Junior Cobbinah dryly tells us that ‘the madness echoes in your soul forever’, and it’s hard to disagree. A glittering guitar is sprinkled over the intentional chaos and speed of the drums and bass, echoing the bands intention for the song to reflect seeking solace in communal madness. So many musicians are currently trying to capture the societal mood, and I believe that Malady have captured the essence of the youth, of here and now, hurtling through day to day life in the big cities.

Malady have made a name for themselves as firm favourites within independent London venues. Demonstrating total versatility, influences in previous singles dancing between glittery britpop, 80s post punk with hints of new romantic. Malady is a musical chameleon, and the sound achieved by ‘Round the Bend’ highlights a remarkable ability to time travel and bend the limits of genre. There’s a thrill in watching bands evolve in real time, and we should all be excited to see whatever concoction Malady present us with next.