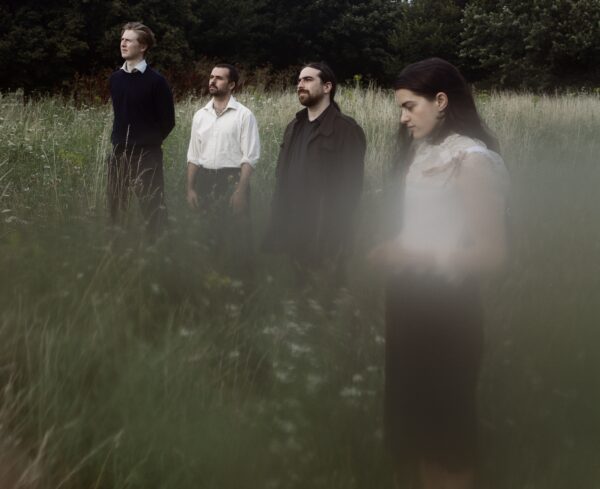 Following up their gorgeously grisly debut single ‘Offerings’, London’s Modern Woman share the intriguing ‘Juniper’, a mysterious track that slowly creeps up on you. The song, out through End of the Road Records, heralds the announcement of debut EP ‘Dogs Fighting In My Dreams’ out September 17th.

Showing their genre defying versatility from the get-go, Modern Woman choose a decidedly different approach here. While ‘Offerings’ kicked off with a guitar riff that suggested Modern Woman were going to be the best new garage punk around – a notion quickly proven untrue as the band proved to be something much more thrilling. ‘Juniper’ is a more accumulative affair, with muted guitar and bass tones being led through ups and downs by Sophie Harris’ truly gripping vocals.

Harris, who also features in folk supergroup Broadside Hacks alongside members of Sorry, Goat Girl, Caroline, Girl Ray, and Katy J Pearson, is unquestionably the driving force of ‘Juniper’, her dynamic vocals essentially doubling as a part of Modern Woman’s rhythm section. It’s almost as if David Denyer’s violin parts that come in halfway through the song, and beautifully change from percussive to lingering, are commanded by Harris’ singing.

Even if ‘Juniper’ is not a direct reference to the Grimm Brothers’ eh… grim 1812 fairy tale or  its 1990 Icelandic film adaptation, a black and white medieval fantasy drama starring no other than Björk, both pieces still feel like fitting counterparts to Modern Woman’s music, in which some sort of witchcraft always seems to be at play. It is a testament to the band’s qualities that they have not only managed to create a singular sound, but also a particular feeling to the proceedings. The mixture of excitement and apprehension commonly associated with returning to live shows, then, will very much be appropriate when Modern Woman take the stage with The Goa Express and The Umlauts at So Young Festival in two weeks.