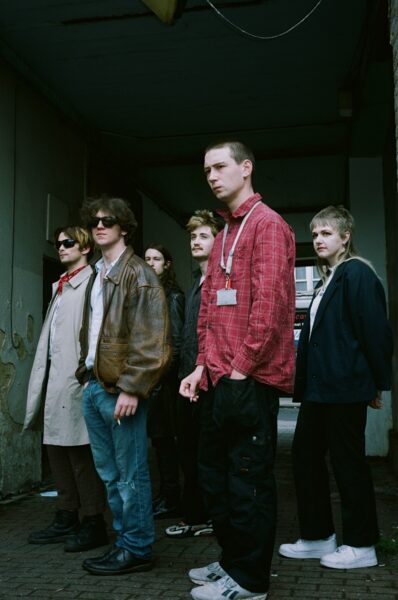 Swamped by an unparalleled buoyant potency, Pigeonhole set free their latest single, ‘Black Cat, White Cat’, unravelling the beginnings of their newest venture. The small post-punk party of seven have waltzed right into the dark depths of Armageddon, sporting a cheeky grin and the gift of their upcoming debut album, ‘Ali Pasha’s Field’.

It has been a hot minute since we saw the microcosm of Pigeonhole make their debut with ‘Hollywood, LA, Pt.2’, but their long-awaited return kicks down any door that dare think it was over. Paying homage to the Yugoslav film with the same title, ‘Black Cat, White Cat’ is an embodiment of dissatisfaction with social and cultural conformity.

Filled with a raw yet mischievous sound, Pigeonhole raises a middle finger up to those who outcast the dual identity. Gangs of abrasive distortion and jagged tremolo guitars, partnered with a slippery bassline that would only put a smile on Tina Weymouth’s face. Rolling drum rhythms ravage alongside a devilish lyricism. ‘Black Cat, White Cat’ is consistently upheld by these incredible layers of textured charm as it darts in and out of shady allies at every opportunity.

A year in the making, Pigeonhole are a band that is finally ready to wreak havoc upon anyone listening. With their live performances that seem to burst with unadulterated chaos, they have already begun to develop quite a name for themselves. Our seven beloved antagonists have become regulars among the sprawling reservoirs of the “South London gene-pool.” The prophecies foretell that Pigeonhole will play a release show at The Windmill, Brixton, on the 25th of June.

Give yourself entirely to Pigeonhole, enter and hide in the hidden ground of your soul.