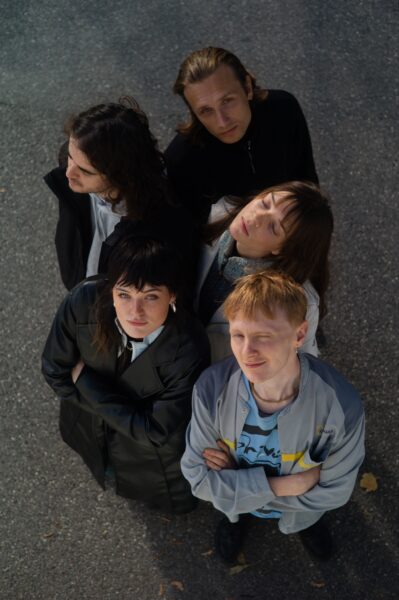 What do you get when a bunch of old friends, ex-partners and session players band together in order to create a safe-space of creation, experimentation, and narrative freedom? A wall-less, ego-free,  extension of their inner-most thoughts. All laid bare for the world to absorb and exhale with effortless cause and effect.

A thing that’s, most importantly, tangibly their own.

Born out of the woodwork of previous projects, Teeth Machine are quite simply, THE ONES to keep an eye on over the next twelve months. A one-of-a-kind creation from the minds of vocalist / guitarist Gray Rimmer, and saxophonist / lead guitarist Arthur Bently – two of London’s DIY sweethearts (Gray is also a member of the choral group WOOM, while Arthur teaches illustration at Camberwell College of Arts). The group have ceaselessly spent the last few years conjuring up a back-catalogue of what can only be described as: atmospheric genius. Genius of which the wider-world has only just found itself worthy of.

Reuniting through an endless series of bedroom sessions and laptop demos, Bently and Rimmer swiftly began piecing together the various outlets picked up from years’ worth of creative practises in order to discover something new. What was to follow those sessions would be a salvation from the confines of self; a thoroughly explored desire to create a world in which language, conceptual synergy, and creative deconstruction / reconstruction took precedence.

A sensorial demonstration of physical, spiritual, and lyrical decadence- a restlessly riotous cross between the unsettled ambience of Portishead or Cocteau Twins, and the empathetic hauntings of philosopher Jacques Derrida. ‘Drive By DK’ was a sensual introduction to a group of artists with cult-like intrigue and infinite musical ambition.

This is storytelling at its most immediate. In a bid to replace the literal objectivity that songwriting often encourages, Teeth Machine gradually become a mysterious love affair; one in which instrumental improvisation plants a firm kiss on the hollow cheeks of poetic fallacy. A timeless move which would make even the most charismatic artist blush and fall under their harmonious spell.

Having performed in secret, and then publicly (but only to those in the know), Teeth Machine cut their bare-bone-brilliance across London’s ravenous subcultural underbellies. Rapidly crafting their signature blend of harmonious howl, which transports its listener into an ecosystem of genuine unrestrained humanity.

“Playing live is a kind of magic practice” they note. “At its best it can feel like a ritual or group conjuring, where the energy produced in a room and within people’s bodies leaves each person feeling subtly transformed or elevated.”

Success was imminent, but placing their music in the hands of others would prove to be one of Teeth Machine’s biggest leaps of faith to date. Commencing their journey first with WOOM’s label House Anxiety, before eventually signing to indie label Ra Ra Rok (Wu-lu, The Goa Express), the group were able to find confidence in the arms of those closest around them; further cementing Teeth Machine as not just a beguiling collective on the rise, but a 360 circle of trust with inspired friendships. 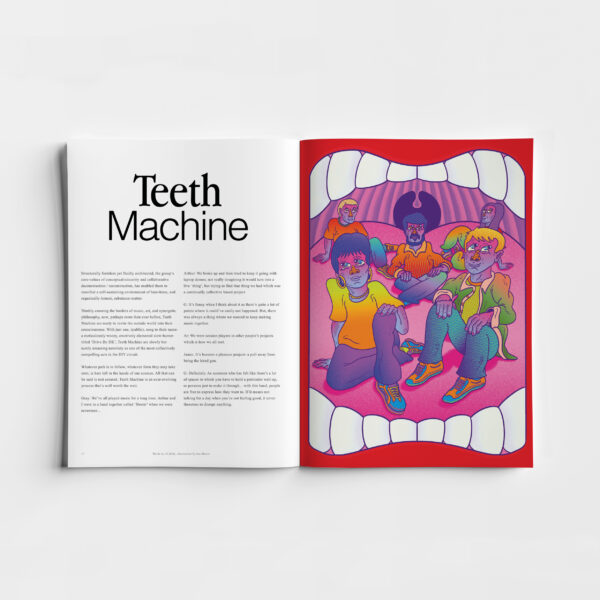 Teeth Machine in Issue Thirty-Six of So Young. Illustration by Ian Moore.

Where ‘Drive By DK’ swirled with impassioned exhaust- like a tranquil headrush after a heavy bout of tears, in their Ra Ra Rok debut ‘Gumball’, cupid’s arrow is set on fire and shot into the infinite abyss of relationships, euphoria, and murky unknowns.

A beautifully bruisy alchemy of crashing cymbals and weeping guitars, ‘Gumball’ was released on November ‘22, with a 7” (of the same name) and second single ‘Penny’, following suit. Entirely self-produced, and recorded between a shed belonging to Staples, and Bently’s home, ‘Gumball’ (which was mixed by Dilip Harris) is a frenzied mantra for communicative breakdown. Like a spider caught in a web of its own existential creation, ‘Gumball’ seeks to question, resolve, and renew- doing such with meticulous raw-intent.

With a sense of boundary-less nonchalance often reserved for bands far further in “the game”, Teeth Machine play with parallels as though it were a second-language. Whether they’re sound-tracking the madness of adolescence through the medium of collective peace, or mutually documenting the elated high’s and lingering lows of the individual, few can capture the human spirit quite as unconventionally as Teeth Machine.

Which leads us to the present now. With the imminent physical release of ‘Gumball’, which comes as a ten-page concertina (5 panels per song) written to “symbiotically symbolise the project opening from internal spaces, into expanded worlds”; and with artwork by Bently, music videos by Reddy and an endless array of fellow musicians at their beck and call (Both Marco Pini of Slow Dance / Sorry, and Campbell Baum of Ra-Ra Rock / Sorry, who Teeth Machine would eventually go on to tour with, have played key roles in the bands preliminary stages), it’s safe to say that Teeth Machine’s tale, from its very inauguration, has been a collaborative one. And yet, we’re still only just at the very beginning.