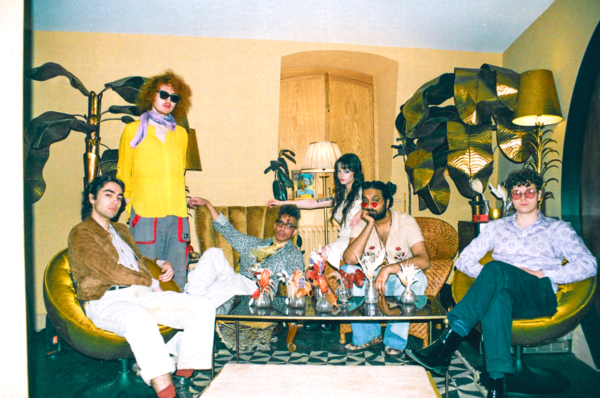 Originally formed in Oxford but now based in London, Mandrake Handshake are a 9-piece collective that blend and play with conventions of genre. They name influences as broad as krautrock and funk, and as specific as Japanese anime and Latin pastoral poetry to sum up the foundations of their resulting sound. Undoubtedly drawing from both the experimental rock and psychedelia of the 60s, as well as the psych revival of the 90s, Mandrake Handshake are intriguingly familiar yet refreshing.

Emerging layer by layer, ‘Emonzaemon’ blooms into 4-minutes worthy of the self-dubbed style – ‘Flowerkraut’. The track dives in and out of the floating vocals of Trinity Oksana and Eva Mae Symonds as they blend and bend into a dreamy soundscape, backed by whirring synths and a snappy drum beat. With ever-changing and multifaceted instrumentation, ‘Emonzaemon’ is almost choral, every member of the 9-piece is felt and heard. From the single’s electronic introduction to its archetypal rock closer, it harnesses a loose danceability, at times whimsical and at times bullish.