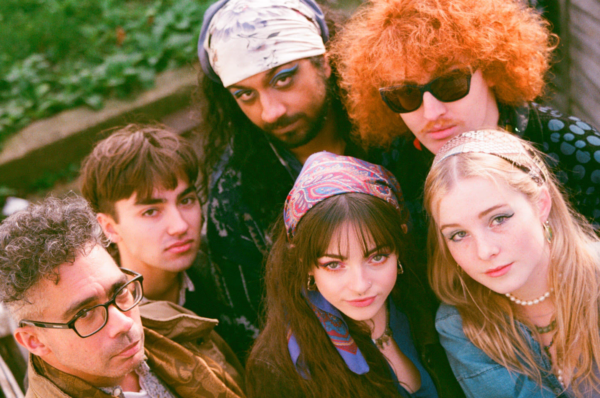 There are many benefits to showering with Eucalyptus. Tying a freshly cut sprig of this fast-growing evergreen to your shower-head awakens the mind, stimulates the senses and alleviates listless funk. Folk who know best state that just two-minutes spent inside a balmy cocoon of Gaea’s elevation does kaleidoscopic wonders to the soul- leaving your psyche to its own devices; drifting away into a lover’s paradise soundtracked, by Oxford’s Mandrake Handshake.

Having just signed to Nice Swan Records, Mandrake Handshake are aromatically electric and their recent sprouting, ‘Gonkulator’, psychedelically-perspires droplets of essential radiance; like planting a terrarium inside a solar-powered light bulb in which petals always answer with words of love and Bonsai blossom’s splendidly into a six- stringed-hybrid of eternal joy.

‘Sunshine Hit Me’ the people sing in chorus as ultra-fine rays of muse bask the solar-plexus in a hippie-flip of ‘flower-kraut’, and fine-flute solos.

When Alice asked the flowers why it is they chose not to speak in human presence… the Tiger-Lily replied “they make the beds too soft—so that the flowers are always asleep”. If ever there were a calling to dream of hyperphysical-horticulture whilst remembering what the White Rabbit said, ‘Gonkulator’ would be the unwind for the divine-connection. As babe’s reveal their rhythmically blushed cheeks from the free-flowing buds of a new counter-culture, Mandrake Handshake step forward to re-define magic, lucidly replacing the moon with an Ostrich egg and declaring our inner-cosmos re-born.

‘Gonkulator’ has more statement allure than a pair of fishnet tights belonging to a mermaid. It’s not often that a gang of misfits can completely rapture with just two-singles to their legacy but if Mandrake Handshake keep planting stars, a universal shift is imminent.

Save water, shower with a friend. Save the planet, start a band of nine and call yourselves Mandrake Handshake.