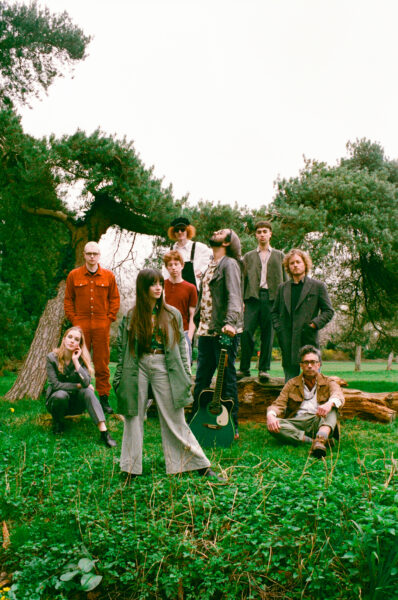 Just in time for the Spring bloom, hop into the lovely technicolored realm that is cosmic collective Mandrake Handshake’s magic garden.  Continuing their expedition towards the front of the pack as one of the most exciting new psychedelic bands in the U.K, the dectet have given us another dose of delightful, resplendent goodness for the mind, body and soul with ‘Monolith’.

Delving into the sounds of spiritual exploration with a dose of  fervent psychedelic-pop, Mandrake Handshake’s newest offering is a sun-laden kaleidoscopic, spiraling voyage. It’s a psychedelic renaissance, seemingly touching on the sounds of Ultimate Spinach or July, finely intertwining between the sixties American and British psychedelic underground of that era – along with the more contemporary Brian Jonestown Massacre (who’s ‘Mandrake Handshake’ is what the band were named after). It’s gloriously whimsical and ethereal, making one dance around arable-lands.

Featuring single, ‘Monolith’, the forthcoming EP recorded by Andy Ramsay of the legendary Stereolab, could possibly be the sound to transcendence and looks to be released upon our mortal realm June 18th via Nice Swan Records (Sports Team, Pip Blom, FUR, Malady).

Get involved now, and experience the exciting new outfit yourself for a heady dose of balmy psychedelia.