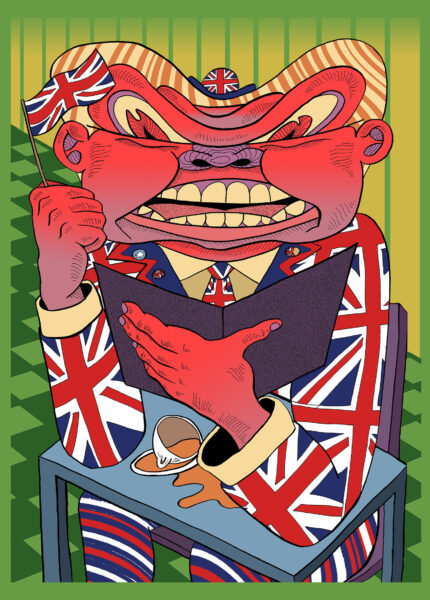 Ian Moore is an illustrator originally from Sheffield but who studied at UWE in Bristol, UK which is where he is currently based. Ian started working as an illustrator 5 years ago. His first jobs were for local bands but he has since branched out into editorial illustration.

We came across Ian’s work when he first entered our Illustration Competition and we’ve worked together a couple of times since. We got in touch with Ian to find out about his work process.

I studied graphic design before I studied illustration, so out of habit I always start off by doing some quick, scrappy thumbnail sketches, just to get some ideas out. Then gradually refine it to something a little clearer. I often do a draft of the final image, just to show clients a more complete picture in case they want any changes. I usually draw the finished illustration with a brush and ink, occasionally using a pen for finer points then bring in textures and colour in photoshop. I scan a lot of things such as netting, foil and fabric to use as textures but sometimes use photographed textures too.

These days I try to keep my illustrations vibrant and punchy. Also, I prefer to keep as little ambiguity as possible in my illustrations, preferring to communicate a direct message. I like poking fun at things that irk me, and try to include a fair bit of humour in my work so hopefully people pick up on that. 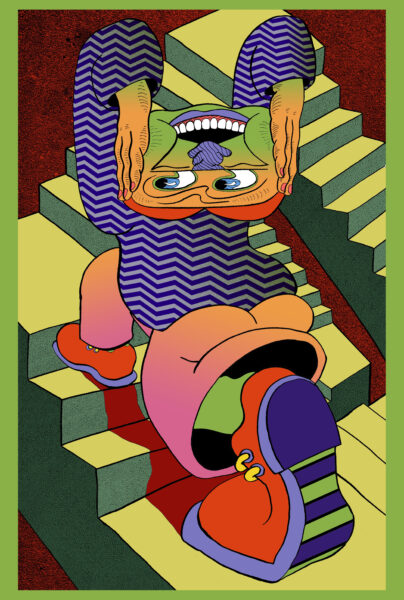 I try to keep up with contemporary illustration and design in magazines and on instagram. I also listen to a lot of different types of music while working too. If I’m ever in a bad creative slump I’ll take a look at caricaturists like James Gilray and William Hogarth, also the work of Ralph Steadman and Al Hirschfield are a constant source of inspiration.

Do you have a favourite project or piece of your own work?

I finished a zine based on 1 star Tripadvisor reviews of bars and restaurants earlier on this year. That was a particularly fun project to work on because I had worked part time in bars for a few years, so it felt like a cathartic project.

I’ve got a few things on at the moment. I’m doing some editorial work but I’m also slowly chipping away at another zine. This ones going to be a sort of satirical zine about music. I’ve also been getting work ready for a show with my mate, Kid Crayon in Bristol.

Tell us a bit about your entry to our illustration competition… Why did you choose Hotel Lux?

I’d heard English Disease for the first time just before the competition had been announced and it just resonated with me, probably because I spend a fair bit of time in the pub. 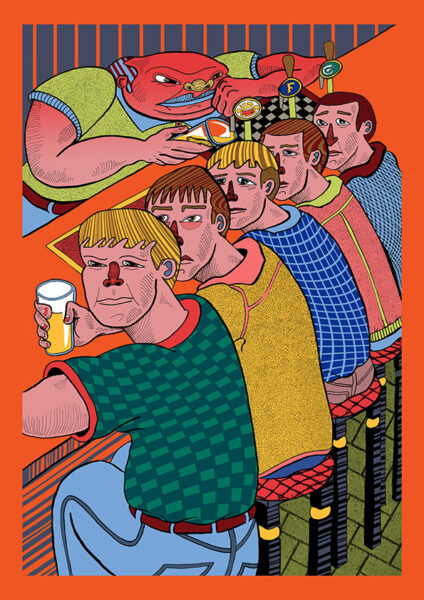 I’m hoping to get a couple of more zines and personal projects finished by the end of the year, but also balance them out with more editorial illustrations. I’d like to continue to experiment with bringing different textures into my drawings as well as expanding the context I situate my illustrations in. I’d like to try my hand at illustrating some posters and T-shirts.