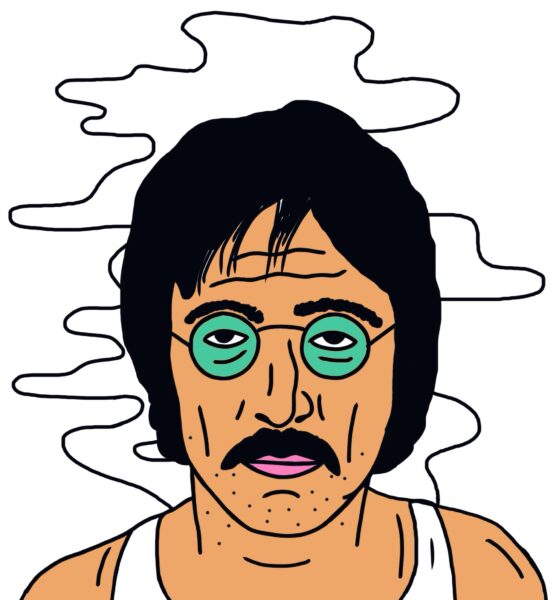 For all those at Truck Festival this year, as well as a plethora of incredible bands, you may have seen the illustrations of Gabriel Hollington (AKA Pizza.Boobs).

From festival posters and merchandise to banners and billboards, Hollington’s delightful cartoons were a fitting visual accompaniment to one of the best festivals of the year. We had a chat with the man himself about skating, dream bands and putting pen to paper. 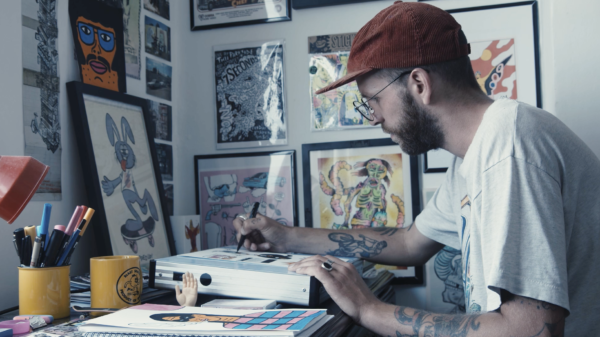 Why and when did you become an illustrator?

When I first started drawing properly and taking it seriously was when my mate Alex had made these really cool illustrations and stuck them on some t-shirts. All our mates had one and that really made me want to make a cool t-shirt too haha. I started messing around with ideas and got hooked, couldn’t stop. Apart from playing in bands I hadn’t really done much creative stuff before and I loved it. I got frustrated playing in bands because you have to rely on other people to turn up to practice etc and I loved the fact that I didn’t have to rely on anyone else apart from myself. I became a full time freelance illustrator at the beginning of this year! 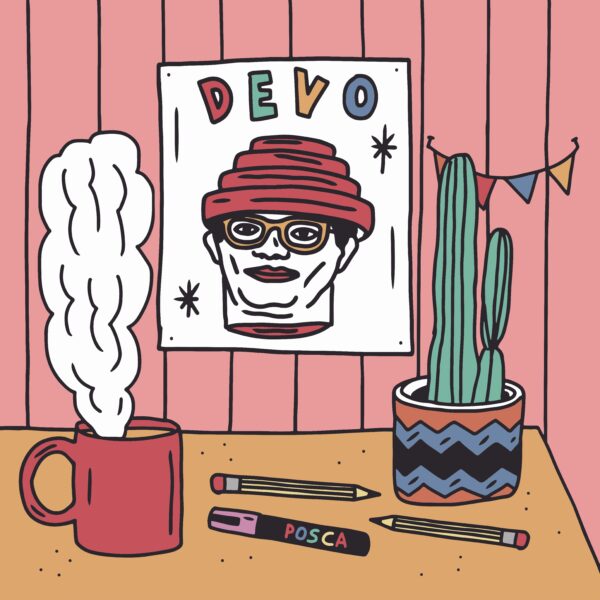 How did you get involved with producing the graphics for Truck Festival?

Funnily enough I think it was through entering the illustration competition you guys do. I entered one last year and got 18th or something which meant I got featured on your website. After that I got an email from Broadwick live who were doing the rebrand for Truck Fest this year. That was a lot of fun, I didn’t get to go this year but from what I hear it sounds like my artwork went down well at the festival! Stoked.

You’ve done artwork for bands ‘Clear’ and ‘The Chats’, how did these projects come about?

The Chats thing happened because me and my mate ‘Rad Biker’ made a huge Chats inspired painting when I was in Oakland last year. We listened to their album for like 6 hours straight and made the painting. It was a guy sat on top of a burning van smoking a cigarette and at the top it said, ‘I’m on smoko, so leave me alone’ haha. We tagged them in it and eventually they asked me to do a shirt design for them. Those guys are funny, I’m seeing them in Brighton in November, can’t wait.

Clear are a garage psych band from LA, I met the singer because I was staying on his friends sofa in LA last year and we became good mates! 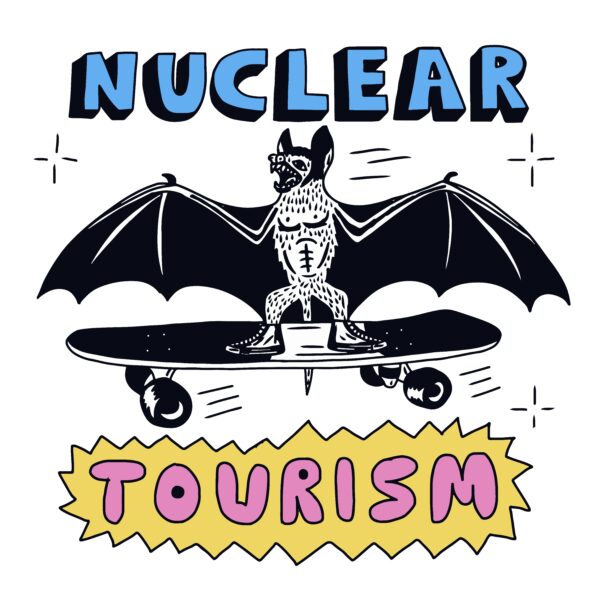 Who would be your dream band to design for?

My style definitely suits punk/garage kinda stuff so I would say one of my favourite bands to skate to is ‘The Bronx’ that would rule to do something for them or ‘wavves’ have really cool artwork so it would be cool to do something for them. I did a shirt design for a band called ‘Nuclear Tourism’ earlier this year I think they’re on Burger Records and that was one of the best things I think I’ve ever drawn! I’ve also done a few cassette covers recently and they’re always fun! Especially when the band send you one in the post, nothing beats seeing my artwork on an actual thing.

You’ve recently posted a few short animations on your Instagram, is animating something you’re looking to do more of?

I try to mix stuff up as much as I can to keep things fresh and exciting for myself and hopefully for the people who dig my art. If I’ve just been doing a lot of drawing and nothing else then I’ll go paint a wall or animate something to stop myself from getting bored of art. I just started learning to animate this year and its a lot of fun but also a real head fuck to begin with! I wanna get better for sure, I want to get better at everything, always trying to think of new things to do like little comics or collages or whatever. I think art is a never ending journey, always trying to top the last thing that I was really proud of. Its all I think about, it can get kind of unhealthy after a while and isolating so if it gets too crazy I’ll go skate or play my guitar or cycle somewhere. 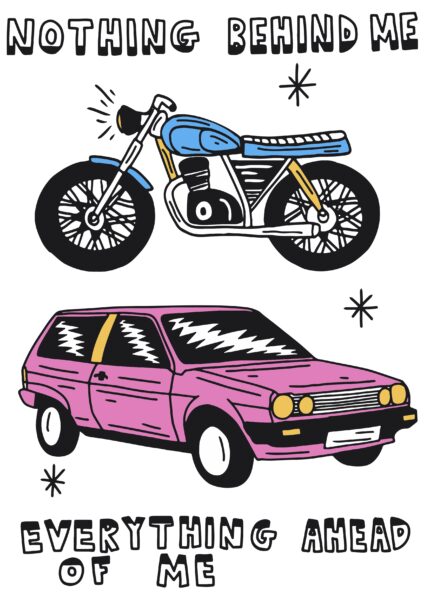 I love the name ‘Pizza Boobs’ and it’s always made me laugh, Where did it originate?

Haha yeah people are always confused by that, like they think its a macho thing or something ‘I LIKE PIZZA AND BOOBS!’. I just eat a lot of pizza man and I’m afraid of getting boobs from eating too much. Gotta make sure I skate a lot so that doesn’t happen… Its hard work keeping the pizza boobs away. But yeah I think its cool when illustrators don’t use their real names, I was influenced by other illustrators names like Burrito Breath and Heavy Slime. Its kinda like a band name but without the band and people are more likely to remember it than if you just go by your actual name

Are you working on any exciting projects at the moment?

I just did some skateboard graphics for a company based in Santa Cruz called Prism Skateboards, I’m pretty excited to see how they come out and skate my first ever graphic. I’m working on some German TV adverts at the moment. Shits getting crazy, I don’t know whats going on. I definitely want to do more stuff for bands, they’re usually cool with just letting me do my thing and it always turns out way better that way. When you’re doing a job for a big company and there’s a big line of people that have to approve the artwork it generally doesn’t end up looking like how I want it to look. But either way I’m stoked to be doing this for a living, beats cleaning toilets. 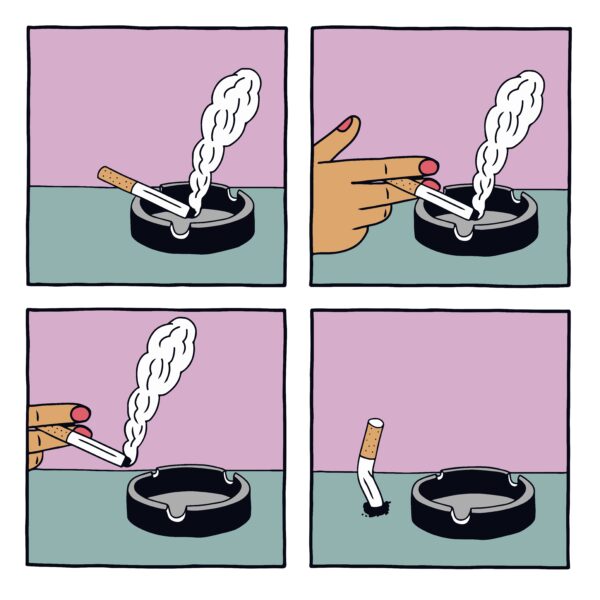