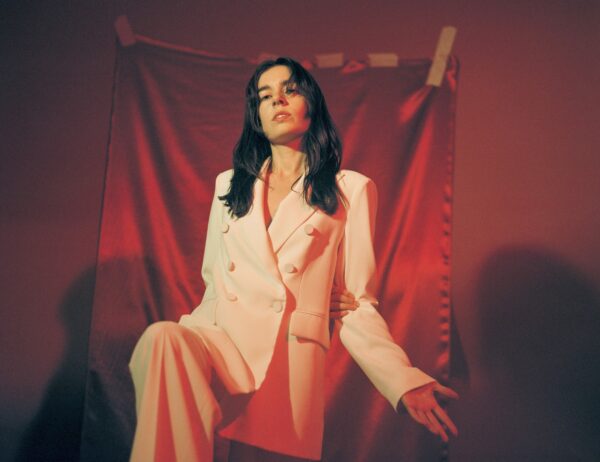 Whilst the print edition only has room for a few questions, we like to post the full interview online alongside their latest releases for you to dig in to. In Issue Twenty-Two we sent over the basics to Sinead O’brien, the Limerick born poet and performer who already has singles with Speedy Wunderground under her belt as well as a AA side via Chess Club.

Originally from Limerick in Ireland, I stopped by Paris for a few months after graduating before finally deciding on moving to London with a gang of close friends. It felt like the right place to be based. It still does. The music I make is a very collaborative process with my band Julian Hanson (Guitar) and Oscar Robertson (drums). The words are central. Melody, tone, pace, mood – all of these elements radiate outwards from the lyrics. I started out by writing observational pieces, noting expressions, environment, the slightest changes in atmosphere and behavior of people. I am completely fascinated by these subtleties.

Limerick (home of The Cranberries & Richard Harris) named after a form of poetry which was used by writers and poets including Joyce, Lewis Carrol and Mark Twain.

Growing up, I went to an all girls catholic school. My art teacher was the last remaining nun who was surprisingly focused on helping me get into art school. It was quite picturesque – six hundred girls in floor length skirts, ties done all the way up, marching up and down six flights of stairs in this big beautiful 19th century building. I looked for points of differences amongst the uniformity. The city has influenced me strongly too – it still does. I went to a lot of gigs during those years. When bands from London or Tokyo which no-one had ever heard of would come – it felt like a time of discovery. Laying the foundation for my own musical taste and ideas. The music you listen to – its such a commitment, it almost cut people up into distinctive groups, dividing and coming together. Flocks of young animals just trying to understand. When I come back to Limerick I pick up just there, where I left off. I keep coming back and understanding and discovering. It’s coming back with purpose, reflecting who I am now against the place I grew up. It’s a very sensitive and almost invisible process but something precious.

What led you to start writing and performing songs?

I moved to Paris in 2012 after graduating from Art school in Dublin. A friend saying goodbye casually suggested that I write an online piece and call it ‘freak watching in the city’! I started to write short pieces during my off time from beneath rainy cafe awnings, inside the Pompidou centre, at my home on canal St Martin and every place between.  I love to observe and write my environment and found a kind of humor in it at that time. To me it was almost ridiculous – to be a ‘stranger’ noting down strange things. I found it surreal and really connected with that. It’s quite theatrical to say ‘here I am and this is what I’m seeing’. Like opening a curtain and revealing your world. Impact and drama. I alway find a sense of drama in the everyday. It’s interesting and gritty.

The pieces began to take on the shape of poems and I began working on them to give more symmetry and form. It’s not like you know why or what you’re doing, just a piece or work which needs working on. It wasn’t until I had several notebooks full that I felt a reason to perform.

Can you tell us something that you really love?

Suits and dresses. The most basic units of measurement in clothing. I love the polarity of the two, to go between the poles is to be in constant dialogue. Talking about traditional ideas of masculine-feminine here.

Can you tell us something that you hate?

Cream. It’s too decadent. It’s an embarrassment. Makes me blush!

‘TAKING ON TIME’ my release on Speedy Wunderground is a lyrical examination of my positioning in the world. I reflect myself onto different surfaces and paint the results. The ‘walled city’ I speak about is Limerick, where I grew up. I find this idea of the walls we make (physical and otherwise) fascinating. Frames, ways of seeing and perspective as so biased – in fact we can never really be unbiased. That’s what gives everyone a particular and unique way of seeing; their own ‘frame’. Walls can be a defense, they can also be a division between order and chaos. And what do gates mean when the walls fall down? Walls are the definite limits, somewhere to draw the line and work backwards from. The track weaves in and around these themes in a rather cyclical nature ending up where we started out only different. It’s made to go on a loop! Maybe it’s different every time it plays out.

I’m really excited about some of the shows coming up in October as well as touring in Ireland with Whenyoung in November. It’s going to be such a busy period, a lot of live shows and the chance to get to some cities outside of London and outside the UK too!  I’ve been working on new tracks, visuals and videos with some great people.