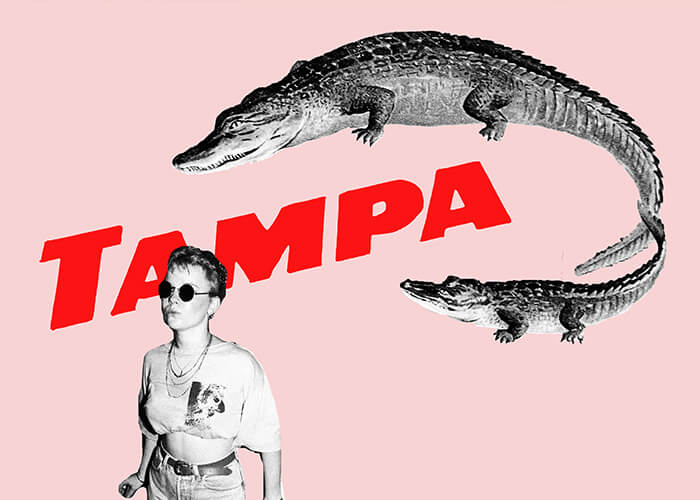 “There were enough kids with no hope of going anywhere to make it good”. A former staple in the Tampa punk scene, Merchandise leave behind the part time Punk to produce their debut Pop record ‘After the End’ with indie label giants 4AD. Album opener ‘Corridor’ instantly lets you know which incarnation of Merchandise you’re about to receive, the next 45 minutes isn’t the anarchic band we used to know and this instrumental swirls to an open admittance. For a record that meanders through sounds it’s the vocal that keeps everything together in one place. Despite lacking vocal clarity, Carson Cox’s conviction gives the impression that whatever he does croon holds vital importance. ‘After the End’ holds a mellowness, a warmth that you could listen to in times of despair or happiness and this is most evident in ‘After The End’s first highlight ‘True Monument’. Despite threatening many a sharp left, this track encapsulates the through road that runs throughout the album. Romantic riffs introduce a story to match, Merchandise impose a vulnerable side they may never have shown before.

However ‘True Monument’ sets a tone that doesn’t go unchallenged. Merchandise experiment with sounds that wouldn’t be out of place on the most “out there” 80s pop records. ‘Green Lady’ plays with epic synth intros and electro drums to keep us guessing whilst Cox vocally pulls it all back to a place more familiar to what preceded it.

‘After the End’ inflicts savoury sounds but before we categorise it into “easy listening pop” the album hits with its two very sweet pop gems. One after the other ‘Telephone’ and debut single from the record ‘Little Killer’ provide the lift and tempo that ensure that these ten tracks aren’t going to just pass us by. ‘Telephone’ stays true to the vibe as Cox sings, “and I wait and I wait by the telephone and I call and I call and I call but she don’t”. But this track is catchy and you’d be forgiven for letting this sad story brighten your day. It’s simple and it captures the “Pop” that has been such a prominent description in the build up to the albums release. ‘Little Killer’ is the track you’ll keep on repeat. The debut release comes straight from 80s endeavours; with sprinklings of The Smiths ‘Little Killer’ is the highlight of this “twisted reality” album. ‘After the End’ then returns to its opening agenda, slowing into head sways, Morrissey and Marr-ching bands. ‘Looking Glass Waltz’ and finisher ‘Exile and Ego’ complete what could be seen as a stepping stone album for Merchandise. They’ve marched into a world maybe they never saw coming but embraced it all they could to self produce a go to album for those days you need a reality check. ‘Exile and Ego’ serenades “help me do what’s right baby” and it seems she did.