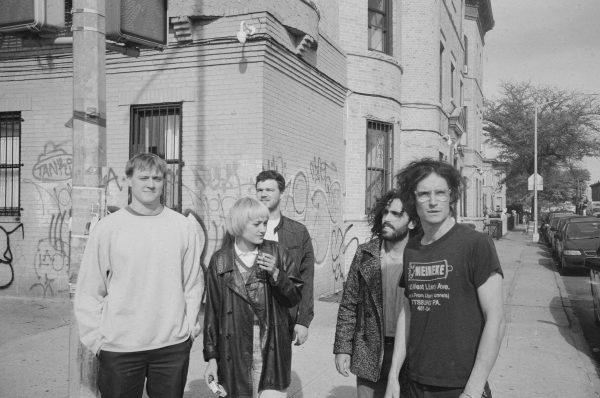 NYC’s Slow Fiction Share New Single ‘In the distance, where it doesn’t matter’.

While on any scenic drive, you need to be Zimmered up with a soundtrack of virtuosic quality to completely immerse yourself deep within your inner musings; otherwise, it’s apropos of nothing. Now, there’s no need to stress since Brooklyn-based Slow Fiction has a little something for you; their road-trip dénouement, ‘In the distance, where it doesn’t matter’, it just so happens to be their second single from their self-titled debut EP.

Bright-eyed early noughties guitars are behind the wheel on this one, trailing an atmospheric hum of feedback and dancing rhythms, ‘In the distance, where it doesn’t matter’ simultaneously deals with a tumultuous emotional toil, making it one deceivingly colourful number. As vocalist Julia Vassallo puts it, it’s the incarnation of “a three-edged sword, where the lines of reality and perception become distorted.” So either grab the nearest box of tissues or strap on your dancing shoes; this one’s a ferocious groover with an unrepentant sense of enmity.

Most likely a fresh one to your ears, Slow Fiction touch the fictitious hems of garments once worn by Sonic Youth, my bloody valentine and Yo La Tengo. Listen to this unique quintet of storytellers play around with ethereal shoegaze, fuzzy garage rock, and elements of an off-kilter new wave.

Here together for a chat Julia Vassallo (vocals), Paul Knepple (guitar), Joe Skimmons (guitar), Ryan Duffin (bass), and Akiva Henig (drums) take us on a guided tour of their expressive, often danceable brand of indie rock and what we can anticipate from their debut EP.

Hi Slow Fiction, it’s a pleasure to speak with you! Do you mind taking us all the way back to the beginning?

Joe: Paul and I actually grew up in the same town. So we always kind of knew each other, but we really met when we both moved to New York and connected over shared musical interests.

Paul: Julia and I were friends from high school. When Joe and I decided we wanted to start the band, she was the first person I reached out to.

Julia: I was finishing college, working part-time at a thrift store, and generally fed up with my personal life. I felt like the world was moving on without me. One morning at the store, I got a text from Paul asking if I wanted to join him and Joe. Without hesitation, I said yes. From there, I showed them what I was working on, and we started hanging out all the time; that was that. It was one of the most amazing feelings to feel like I belonged in a way I had never felt before.

Ryan: In early 2021, I’d spent so long in isolation playing music at home and lamenting that I didn’t have more people to share that experience with, so I started searching for bands to join. I found their Craigslist ad, and it was the only one that felt right in terms of influences and aspirations.

Akiva: I actually saw Slow Fiction’s first live show as an audience member! I was playing with a different band that same night. I left right after their set to go to that, and they all ended up showing at this other show later. I then met everyone through a mutual musician friend (shoutout to Nardo); sometimes, it’s a deceivingly small scene here. We started gigging frequently and got really tight by just playing so much. That origin, for me, has really helped our writing process as a group, which is what I love about this band. I feel very comfortable trying out parts because I’ve developed such an intuitive sense of how everyone plays.

Your self-titled debut EP is due to arrive in February; could you talk about the overall meaning of this EP?

Julia: I like to think that every song comes from the perspective of a “character”, which is technically just an extension of ourselves but warped and exaggerated. The character laid out in the songs on this EP is a stubborn, arrogant, unreliable narrator who, underneath all that, is vulnerable and dealing with grief and heartache.

Joe: What I love about the musical history of New York is how distinct each band can sound, even if they are all part of one “era” or “scene” of music. I feel like this release is us trying to move more towards finding our own distinction and capitalising on what makes us unique, something we can continue towards in the future.

You were all living in different parts of the US and have now coalesced in New York; what can you tell me about how this city has changed your personal outlook on music and how it has influenced you as a band?

Julia: Yeah, I think having lived here for over five years now, I’ve witnessed so many incredibly talented artists, some of whom have found commercial success and others who are working towards their goals. Trying to “make it” here is trial by fire, not because everyone is competitive but because the environment is frenetic, and it’s supposed to make you nervous in a way. When I decided to take the full plunge into music with a group of people, it was like, “Okay, we’re all doing this because we love it because if there’s any other reason, it’s not worth it,” and I still stand by that.

Ryan: New York had an exciting energy about it in the summer of 2021. Everything was reopening; everyone was excited to start doing anything in public again, and venues were eager to book new acts. That opportunity galvanised us and helped us play many shows as we found our footing as a band, and it’s helped us develop our sound a lot faster than we otherwise would have.

Akiva: I think NYC has really inspired me to make better music (and more of it) because there are so many goddamn talented musicians here. There is definitely some friendly competition hustle in the NYC culture.

What about the sound of this EP? How does it compare to your previously released work?

Joe: Guitar-wise, Paul and I spent a tonne of time listening to more shoegaze-inspired guitars, like my bloody valentine, Sonic Youth, and Yo La Tengo, to try and bring some of that sonic territory that we felt might have been missing on previous releases. We spent a reasonable amount of time in our basement making our best Lee Ranaldo impressions to track the noisy feedback guitars you can hear over ‘In the distance…’. ‘Take 4’ is like four guitar tracks layered, with one of us playing the guitar and someone else messing with their pedal board to create that soundscape.

Paul: Our process was much more thorough, and we had a clearer idea of what we wanted the finished product to sound like. We felt much more comfortable adding sounds that couldn’t be created by the five of us playing live in a room. Our sound has evolved a lot since we all started playing together. Even listening to our new stuff’s demos, it sounds very different from this EP.

Ryan: Yeah, we spent a lot of time switching between Pro Tools and Ableton to experiment with new layers and effects. Some of it’s a bit more subtle—there are some synths in ‘In the distance…’ and some extra drum machines in ‘Madman’. The effects in ‘Jericho’ and ‘Top 10 Movie Scenes’ are much more apparent, but our core guitar-driven sound still takes centre stage for most of the record.

Julia: All I know is that every time I record something vocally, I subconsciously whisper to myself to do it better than last time, and I think it works. I wasn’t used to recording vocals too much when we started, so it was a lot of trial and error; I’ve learned a lot from others. This is the most cohesive sound we’ve had thus far, as our group knows each other better than ever.

Akiva: The most significant difference for me—similar to what Joe said—is that we were much more particular about the production details on this one. We spent a lot more time in the studio tweaking things and experimenting with things like electronic drum sounds, which is something that I want to push even further in the future. Our songwriting has also become more nuanced, primarily through countless workshops and trying things out at shows. ‘Jericho’ was one we worked through on tour in early 2022, and it matured over that process. Also, I unknowingly had COVID during the drum tracking day for this EP, so it’s got that COVID sound.

You have played with quite a range of people; what has been your favourite show and why?

Julia: I loved a show we played on tour in Richmond, Virginia. It was a house show; people sat in trees watching us play. It was just such unbeatable energy.

Ryan: That Richmond show was easily my favourite of the year too. It was our last tour show before returning to New York. The crowd absolutely brought the energy for the show. Big shoutout to The Deck in Richmond for having us; they’re doing a lot for the DIY scene there.

Akiva: One of our recent shows opening for Sports Team at Mercury Lounge was pretty sick because it was a sold-out show, and the crowd had a great vibe.

Paul: The Sports Team show was my favourite as well. Thus Love was also on the bill. We’ll look back on it as a seminal moment for us as a band.

The first single to arrive from your upcoming EP was ‘Top 10 Movie Scenes’. Can you pick a film scene that you could picture ‘In the distance’ appearing in?

Julia: I’ve always pictured this song playing in a coming-of-age film, maybe in a scene where the protagonist is at a party, and things are going horribly wrong.

Akiva: I see it in a road trip movie, maybe somewhere in ‘Y Tu Mamá También’.

You had quite a few releases in 2022; after the EP, have you planned what the rest of 2023 will entail and whether you will continue to write at this rate?

Ryan: I’d guess 2023 will see us writing and recording more than we did in 2022. We have a small studio setup in our apartment and many demos that we’re really excited about. We also have a release show in February, and about half of that set will be made up of new songs we’ve written since recording this EP.

Julia: Yeah, I think that if anything, we’ll be working at a faster rate, not only because of the new studio setup that we have but also because we all understand each other a lot better and have a kind of synergy that’s more conducive to know when we have a good song on our hands.

Akiva: We already have a bunch of new songs in the works that I’m really excited about, and I think we’re all in the mode of trying to write as much new material as possible to work towards making the next release even better.