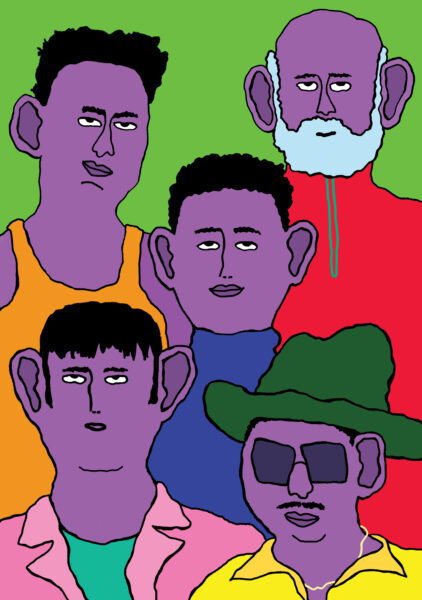 Warmduscher, a German compact word, is taken to mean ‘wimp’ or equivalence (the literal translation, for reference, means something along the lines of ‘person who takes warm showers’, or is literally incapable of stepping out of their comfort zone. Paradoxically, however, the band bathe you in nonsense, capturing a wildly spontaneous jam session into compact pop songs, pissing boiling liquid onto you as it freezes into your ears.

‘Tainted Lunch’, the new album from Warmduscher, is a sludgy ride straight into the backrooms of your mind. Part psychotic post-punk, part existential electronica, and everything in between, it is the perfect third album. It is the sound of borderline insanity, and is the essence of a band finding their weirdest, most comfortable stride.

We spoke to the enigmatic frontman Clams Baker on his jaunt across the pond, to catch up on what the album means, and why you should either shut up or get arrested.

Interview below taken from Issue Twenty-Two which you can find here.

The album is a real mix of genres spliced together – is there a particular theme or idea that you’re trying to get across?

With this one, we had the same time constraints and did it with Dan Carey again, across 5 days. We just wanted to try and go more towards the sort of funky, more soulful direction. Obviously there are still some songs on there that are more rocky or whatever, but we didn’t really think about it, we just did what we do, and the sound is what came out. We were without Saul [Adamceski] for this one, and Adam from Fat Whites Joined us to write it.

With Saul, was it just conflicting schedules that meant he wasn’t with you?

No, he left the band- me and him fell out, although we’re friends now. I love him, but he’s unreliable, and had Insecure Men and Fat Whites going as well so it was never really going to work. He doesn’t really like touring either, so when we became more busy, it just didn’t really make sense. So it was a fight that led to his leaving, but it didn’t seem like it would work anyway. We’re a live band, and the only thing keeping us going is touring constantly, so it just got to the point where it was right for him to leave. No hard feelings, but it is what it is.

Obviously you have a spoken word part from Iggy Pop as an intro to the album, and there’s also a massive tune with Kool Keith on it. How did the collaboration with these two legends happen?

We just asked! With Iggy, he was playing us loads on his show, he ended up playing our whole album. That was such a good feeling for us, because industry-wise, they don’t really want to touch us. That sounds a bit ‘poor me’ or whatever, but I know we’re a bit of a handful so we never really got the breaks a more standard, maybe younger band would have. No animosity towards that, but it does mean we just have to play live constantly, and get ourselves out there that way. So it was amazing for Iggy to agree to do an intro on the album or whatever.

You talk about the industry not really wanting to touch you, but listening to how your music has evolved from album to album, there is a sense of growing into your sound, and maybe dialling back the chaos slightly. As primarily a live band, is there anything you miss about the old spontaneity?

Me personally, yes. The first album was 100% improvised in the studio, and the second was about 70% improvised around the loose structures of what we were playing live. This one is more structured, so we have to be more tight, and people obviously know us now, so come to see certain songs and stuff, so there’s less long freak outs and just jam sessions onstage. There’s a tradeoff there, but as long as I don’t have to just play the same stuff over and over it’s fine. 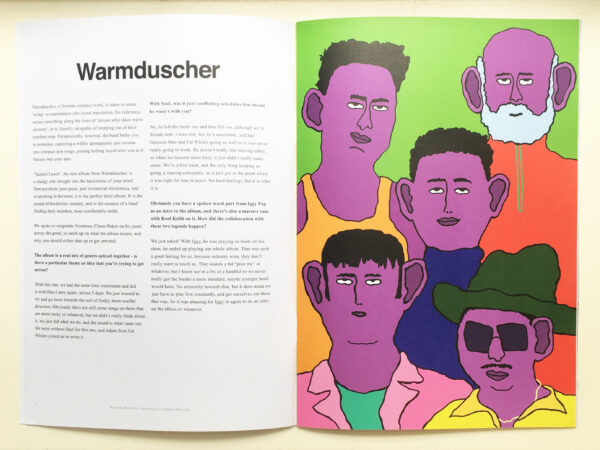 I read somewhere the album was all done on tape- that must have been ridiculous to record, could you talk me through the process?

Well it was- Ah FUCK, I just got stung by a bee.

Anyway – with the ‘Whale City’ album we had a really short amount of time to actually record, so he basically said: “We have three days, so let’s just do it all on tape”. So we went into the studio and I was shitting myself because I didn’t know who would turn up or what state they’d be in. We wrote down the song titles before we even knew what the songs would be- I’d written conceptual lyrics, so I figured I’d just see what music came out, and I’d pace them to that. And because of the setup, we were doing one side of the album on the first day, and one on the second- and because it was all just a continuous recording, if you messed up a part of one song, you’d have to go back to the beginning of the side and start over. So with the new album, it was all to tape, but we were able to do it track by track, so we only had to go back to the start of that song rather than the start of the album.

More so on ‘Whale City’, but also on the new album, there’s a sense of the album almost existing in a separate reality, one the listener is invited into. Is that something deliberate?

I noticed you quantified that comment as ‘not creepy-sexy’. Do you think that in today’s world of hyperawareness, where if a joke, a comment, or an opinion is taken the wrong way it can ruin you life, there is still space for more guitar based music to still be rebellious?

Yeah, definitely – I just think you need to be more clever about it. Take the black midi guys for example. I love what those guys are doing – they’re doing exactly what they want, in their own way, and it’s relating to kids and older people, everyone – I’m just not that clever!

Any final words about the state of the world or whatever?

Fucking lighten up, everyone. We’re all gonna die, unfortunately, so go out and do something if you’re that pissed off. Either go out and get arrested, smash something, or don’t let it ruin your day. Keep it simple, but responsible. Don’t be dicks. That’s about it!