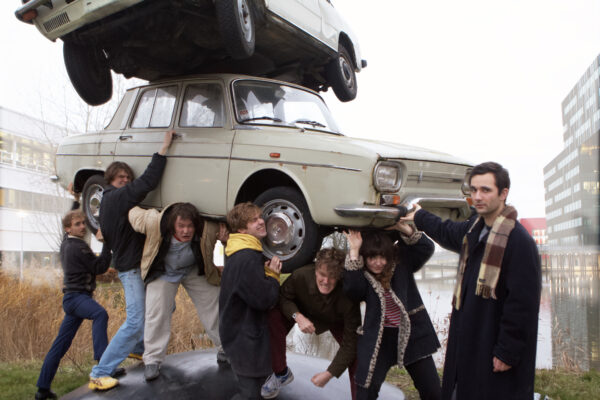 Dutch oddball septet Personal Trainer have continued their hot streak with new track ‘Rug Busters’. Where previous single ‘Key of Ego’ acted as a sharp blow to the head- with its direct approach and all-out ridiculousness, this new track worms its way into the subconscious with its groove-oriented style maintaining the band’s ever-evolving upward trajectory.

If you were to imagine an alternate universe where Stephen Malkmus appointed himself as LCD Soundsystem’s creative director, then you’d end up with something like ‘Rug Busters’. There’s funk, there’s punk, and a certain indie disco lilt to the track that oozes charm – not to mention their canny ability to add a splash of humour making another appearance. Calling everyone from Sunn O))) fans, to people who’ve never seen Pulp Fiction to dance with them, its off-the-wall tendencies are matched by a unifying sense of fun; and bags of character to boot. The self-directed music video only supports this – a one-take affair shot in a warehouse with a carousel of band members flailing around in unison. It’s somewhat slapdash in places, but the fact that Personal Trainer pride themselves on not taking things too seriously, makes it all the more enchanting to watch.

Rising from the very same Amsterdam scene that has produced the likes of Pip Blom, The Klittens and Korfbal in the recent past, Personal Trainer not only keep good company, but are fast proving themselves to be poster-children for the city’s indie exports. Having a charismatic leader such as Willem Smit is one thing, but their ability to fuse irresistible hooks with bizarro elements is what causes them to stick out in such a remarkable way. These are seven minds operating as one, intent on everyone joining them for the ride. That’s everyone. I’m looking at you, Sharon.