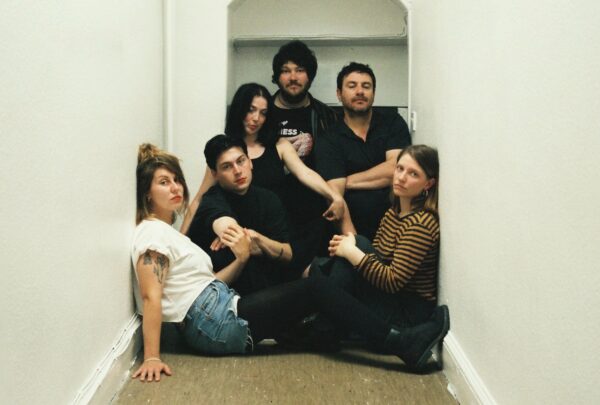 Pet Shimmers have taken 2020 by surprise, announcing their debut album ‘Face Down In Meta’ is set to be released this month.

The seven-piece Bristol group fronted by Oliver Wilde are heading up the album with the imaginatively titled ‘Post-Dick Circle fuck’ – an agitated yet hopeful cut that attempts to acknowledge and empower in an increasingly self-critical age.

Their most direct and driven track yet, it physically buzzes, the down-tuned, bare guitar swamped by a thick rhythm and oscillating slide guitar that falls within itself, the band becoming increasingly capable of crafting rich, textured pieces that still manage to embrace a sense of stark, fragmented minimalism.

Wilde’s subtle and elusive direction attempts to gently coax an open conversation, in their own idiosyncratic and modest way. At times stark and unflinching, they acknowledge the seriousness of the matter, the severe power of people’s perception not only of each other but themselves. It’s striking in their humble performance.

Pet Shimmers release ‘Face Down In Meta’ on 31st January. They head out on a UK tour with (Sandy) Alex G next month.