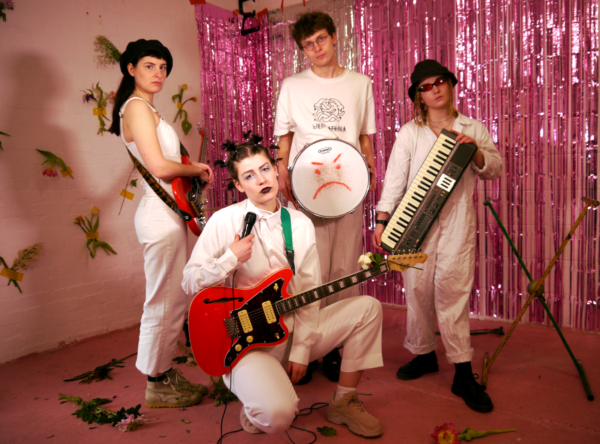 ‘Give / Take’ carries the same earnest indie-punk that has defined artists like Pip Blom, but with a nod to the sad-pop of Snail Mail. Band leader Dana Margolin’s nonchalant delivery is reminiscent of a modern Gwen Stefani, but if Gwen had gone to BIMM and taken in the sights of Brighton Pier rather than California Beach.

The video is described by Popadec as a “juicy exploration of messy polyamory, messy fruit, sex, death and that your pals and music are just as important as any of that shit.” And it very much is that to aplomb. It evokes a very noughties feel, in that, it wouldn’t look out of place on NME TV circa 2010 after The Drums and before Mystery Jets.

Margolin added that she’s “so happy that we could make this video with Bella, she’s an artist who I really respect, and I loved seeing and being a part of her creative process up close when making this video. We had a lot of fun with it, but we also had some big honest conversations about what the song was about, and I think that openness translated into something really exciting and quite raw..”

You can watch the video for ‘Give / Take’ below and catch the band at End of the Road Festival this weekend.