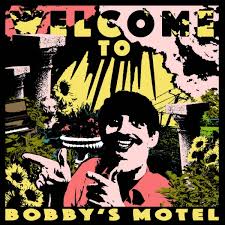 In popular fiction, the setting of a motel is one you’d commonly associate with seedy, sleazy or explicitly villainous activity.

From the world-weary receptionists who appear to be dead behind the eyes, to the fetid stench emanating from every unkempt bedroom, nothing about motels has ever seemed welcoming. So, to be greeted upon entrance by a somewhat sinister and threatening voice that proclaims “Welcome to Bobby’s Motel; the place where all your dreams come true”, you’d be forgiven if you thought you were in for an unsettling stay at one of the aforementioned establishments. But everyone is welcome at Bobby’s, so come on in, grab a refreshment from the minibar and enjoy the entertainment courtesy of the house band – none other than Montreal art-rock act Pottery.

Across the eleven cuts of Pottery’s debut full-length album ‘Welcome to Bobby’s Motel’, which will be performed throughout your stay, there are very few ground rules to be established. Firstly, you must be willing to profess your undying appreciation for the forefathers of post-punk tradition, namely groups such as Talking Heads or Pere Ubu. Secondly, you must not, under any circumstances, resist the urge to groove. Joyful abandonment of all tense feelings, physical or emotional, is key to your enjoyment of the record. Relinquish all anxieties and just let the insatiable rhythms take hold of your body.

For those who were acquainted with last year’s ‘No.1’, the high-octane jams that would have whet the appetite on the EP are only improved upon on Bobby’s, and smatterings of this can be heard on tracks such as ‘Down in the Dumps’ and ‘Take Your Time’. That isn’t to say that the record is constantly energetic, as more introspective tracks such as ‘Reflection’ and ‘Hot Like Jungle’ majestically showcase the versatility of what Pottery can do and provide respite from the animated intensity of the rest of their songs. As previously noted, frontman and guitarist Austin Boylan can at times seem more than a bit similar to David Byrne in his phrasing and vocal affectations, but manages to avoid becoming a pastiche and instead plays out as a loving homage to a clear inspiration.

While there is something of a maniacal and unrelenting nature to the performances across the record, there is an irrefutable charm rooted in everything Pottery do that invites the listener in from the onset. Without question, the band find themselves indebted to tightly-locked drums, even providing an ode to the instrument on ‘Texas Drums, Pt I & II’ and making calls to ‘break the drummer’s arms’ on ‘Bobby’s Forecast’. That said, having a powerhouse of a sticksman in Paul Jacobs is not the only trick that the band have up their sleeves, and this supportive backbone is only reinforced by the impressive chops of the other four members.

It is clear that there is an off-the-wall sense of humour that runs deep in everything Pottery present on their work, but that isn’t to say that they’re incapable of covering serious matters in their lyrics with an astute sense of awareness. The impending threat of climate change and grave warnings about excessive substance abuse are both covered with a great amount of nuance, adding a further indication that they’re not solely receiving credit for the immensely fun and creative music they create. For the most part, Pottery do keep it light-hearted, but they also know how to offer the same urgency that so many of their contemporaries manage to strike a chord with.

There are many triumphs to celebrate here, not least that its creators have managed to craft a raucously entertaining album that stands tall amongst a stellar crop of records to have already dropped this year. Put the preconceived ideas of seediness aside for a moment and allow yourself to check into Bobby’s Motel; you’ll book a night and never want to leave.

Pottery are on the digital cover of Issue Twenty-Five. It’s SOLD OUT in print but you can read the digital edition below.