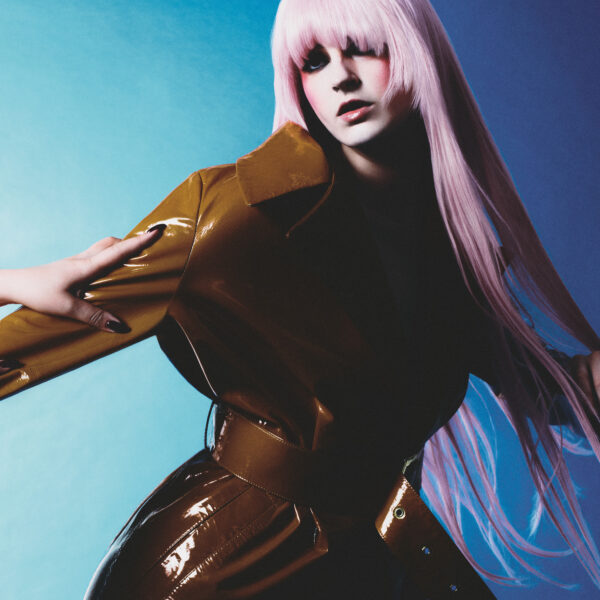 The unfailing and recurring ability that PVA have in manipulating and transcending their own insecurities through the creative praxis of music is what draws me so compellingly to ‘BLUSH’. Whilst similarly focussed debut albums might aim to solidify an unrepentantly consistent identity, PVA accept and embrace the inconsistency of consciousness; the fact that what we might feel today can be alien to how we feel tomorrow. The fact that who we are now is not who we will be in the future. For PVA, identity is ephemeral and volatile, a maxim which we should all take wisdom from.

This is demonstrated most effectively by their two leading singles, ‘Untethered’, and ‘Hero Man’. Whilst Harris’ experience during ‘Untethered’ locates the feeling of euphoria and release amongst recurring neuroses, ‘Hero Man’ engages with the static and unwavering feeling of hopelessness. Each of these tracks could simultaneously be heard in big industrial venues and in the comfort of your bedroom; a powerful double-life.

As well as this, ‘BLUSH’ also encompasses the anxieties and pressures surrounding the creation of an album. As their drummer Louis explains, ‘It’s quite an anxious record sometimes, and carries within it the anxiety of making an album. It’s been a rocky ride, but we always pick ourselves up.’ Naturally, as a collection of songs which were constantly being re-shaped by national lockdowns and turbulent Tory leadership, ‘BLUSH’ does well to represent that, whilst at the same time able to transcend its specific location and accessing instead an alternative vision and a powerful sense of freedom.

This debut is meticulously considered, a body of work not clumped together quickly and without contemplation, but a constant, long work in progress. This is perhaps why the message changes often throughout the duration of the album, whilst style and representation remain constant. A style which we can now so easily identify as theirs. This is not an achievement most could attain from album one. Although PVA’s industrial synthesisers and reverberating vocals might seem otherworldly and ethereal, ‘BLUSH’ is assertively human and undeniably contemporary. Furthermore, and in true PVA fashion, the record is an amalgamation of both the experimentation achievable in a recording studio meshed with the anticipation of a live set. After all, their live performance is the nucleus to their identity as a group and the reason why every South London music enthusiast is familiar with their name.

But, within the solidarity of the studio, there is also a chance to expose those more intimate and introversive characteristics of PVA as individuals. Indeed, Josh and Ella have seen ‘BLUSH’ as a way in which they can strongly expose their queerness. Songs such as ‘Bunker’ and ‘The Individual’, both led vocally by Josh, open this insular realm for him. Josh says, ‘This album is definitely exploring who we are as people. We’ve all had this personal growth and the album is about allowing us to be ourselves more and being comfortable with that.’ This kind of symbiosis between Ella and Josh clearly allows no room for typical post-punk ego; a refreshing and neutral structure instead operates openly between all three members of PVA.

This shifting narrative which PVA celebrate allow us to look at our own lives without judgement. The feeling of a clenched jaw in ‘Comfort Eating’ which ‘bites through the wall’, our insecurities of body image and the detriment of reality TV in ‘Kim’, or the grotesque nightmares which keep us up during the night in ‘Bad Dad’; each un-challenged and objectively problematic issues which we all feel are gifted a new perspective. ‘BLUSH’ forces us to challenge instant judgements we make of ourselves. 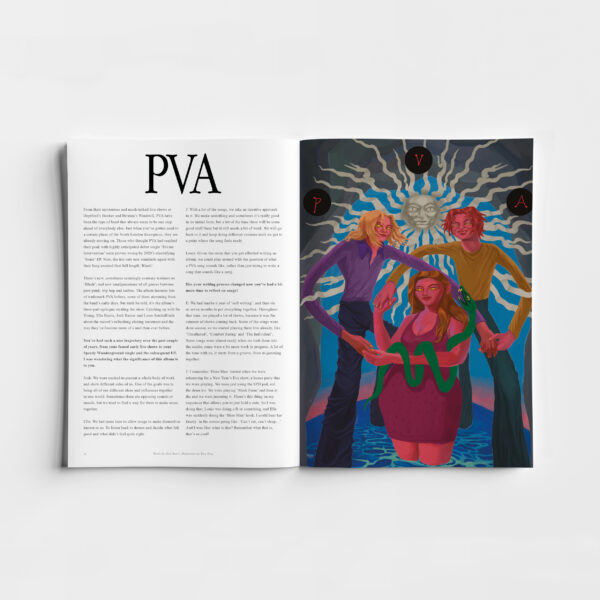 PVA in Issue Forty of So Young.

‘The album has taken on a life of its own, it’s really become something we didn’t expect.’ Ella’s evaluation of the album perfectly situates it as a fully autonomous collection of work: Anxious, queer, transcendent. As a mixture of uncomfortable emotions, it is shocking how well BLUSH sits in the stomach…

‘BLUSH’ is out now via NinjaTune.