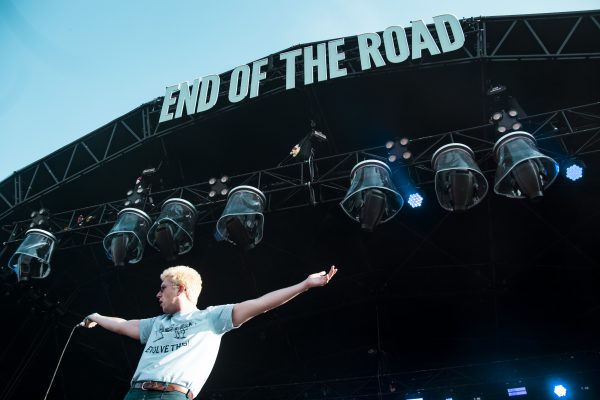 I have never been more enamoured with a festival like I have with End Of The Road. The first reason is because, normally, I fucking hate silent discos. End Of The Road’s silent disco is the silent disco in which all must be measured against. You’re enclosed by a leafy, visually beautiful setting, the DJ’s are perched on some kind of carved, marble shrine where their set could flit from Pixie’s ‘Here Comes Your Man’ to Rihanna’s ‘Rude Boy’ with one switch. Then the food stalls are an art installation of their own – not a sweaty tray of chips in sight; I tried Polenta for the first time – it was nice.

The beauty of End Of The Road is in its organic charm; woods that trail off the beaten path, the tongue in cheek humour, a patch of grass offering band names for sale (Wet Bap was a personal favourite) – everything compliments the senses of the dedicated music fan in a way that’s refreshingly deft of any pretension. 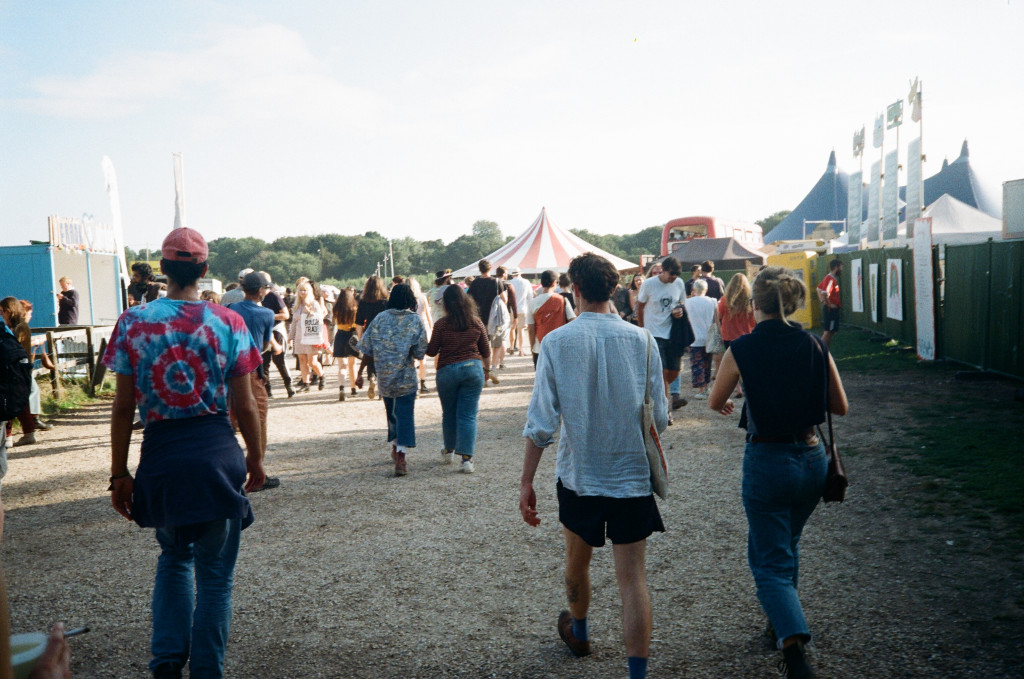 The mullet has slowly began to infiltrate pockets of British subculture again and I believe it has everything and more to do with these guys. If I’m wrong, then I should be right. Amyl & The Sniffers are trashy and crude. They waggle their tongue in your face and writhe around charged by a pure-hearted love for ACDC. They make rock and roll songs that all sound like they should be on the Tony Hawks Pro-Skater soundtrack. They round off their entire set with a merry, ’cheers, cunts’. I love them. 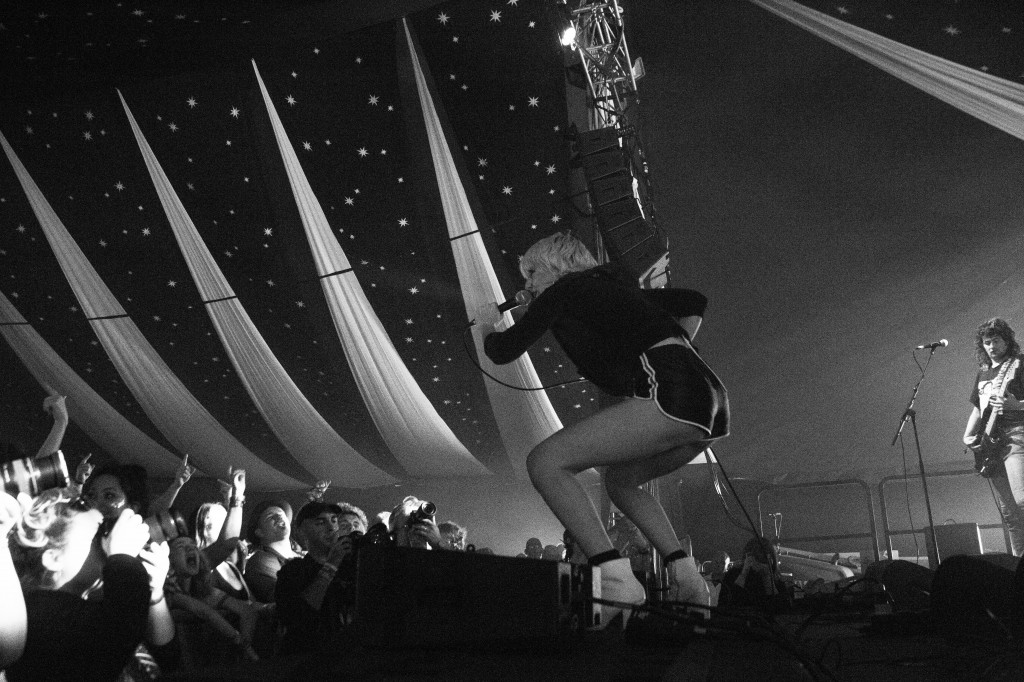 For a man who adopts the same two gestures throughout his hour long set, Omar Souleyman has plenty of presence. Razan, the keyboardist, does a lot of the ground work – in fact, he does pretty much all the ground work. Ribbons of simulated synths flow out into the crowd to dizzying effect. There’s something mesmerising about the whole experience – I’d be impressed if anyone could differentiate between each song, but that’s not the point, Souleyman wants collective peace and his hypnotic, high-speed dabke is just the mediator. 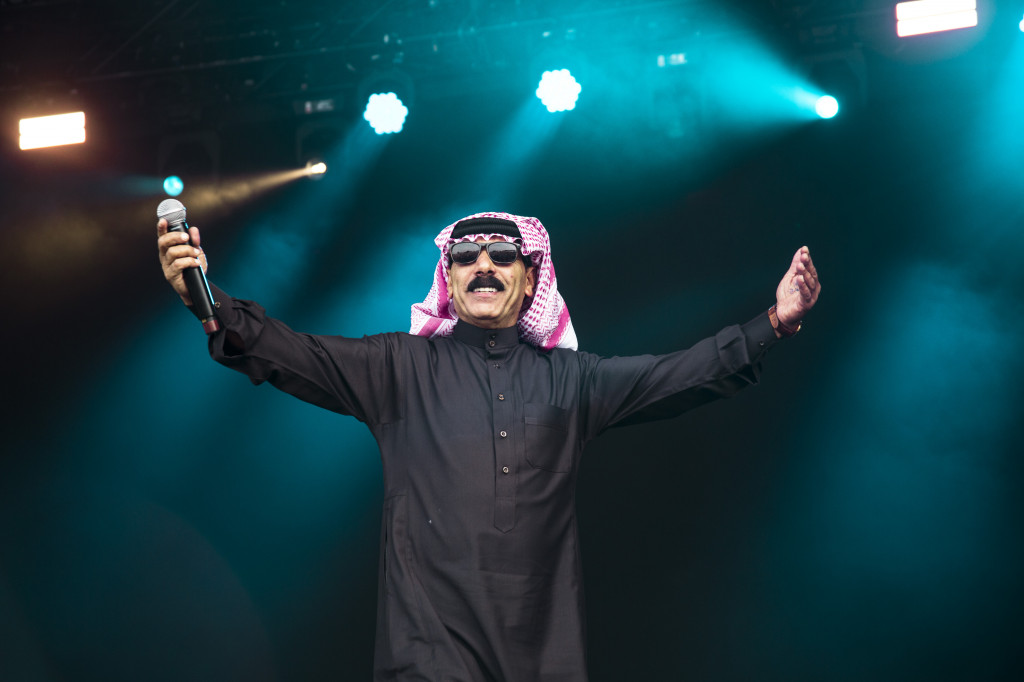 End Of The Road is peppered with an assortment of Saul Adamcewski’s projects across the weekend. Fat White Family’s set, Friday evening, is arguably one of their best – every component of their current line-up seems vital and whilst Lias Saoudi’s performance is as feral as ever, there’s an assurance within the unit that seems slightly more settled and definitely more refined. The new material also sounds fucking brilliant. Warmduscher fire off a chaotic set at 1am but it’s Insecure Men, early Saturday afternoon, who really indulge the masses. Easy-listening lounge and exotica to ease the hangovers – always delivered with a knowing smirk. And always slightly unsavoury. 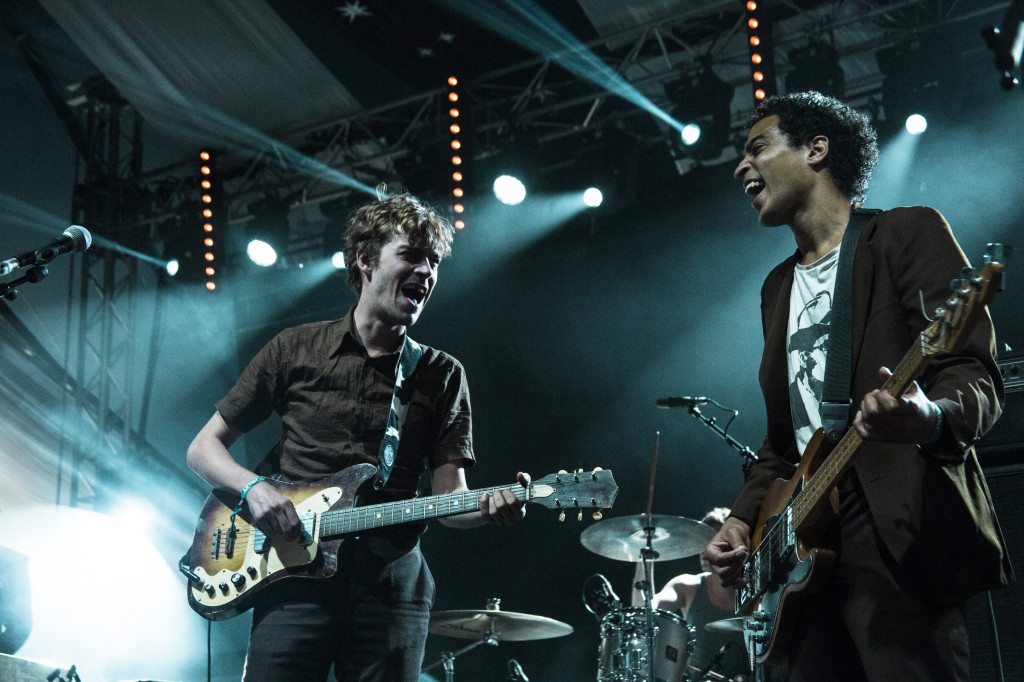 I’m not a huge fan of grand statements, or dishing them out for that matter, but along with Shame, I reckon Idles are probably the best live band in the UK right now. Both seamlessly project indignity, anger, frustration and wit in such tight, sonically brilliant packages. Shame are youthful evangelists, brimming with charm, vigour and a subversive sneer that doesn’t mar the fact that they want their audiences to be safe – so many kids are crowdsurfing to their songs and I mean KIDS – the kind who are going through their terrible twos or whatever you call it. Idles are more menacing, they’ve been through pain and anguish, their music an open wound to the plight of sometimes merely existing. 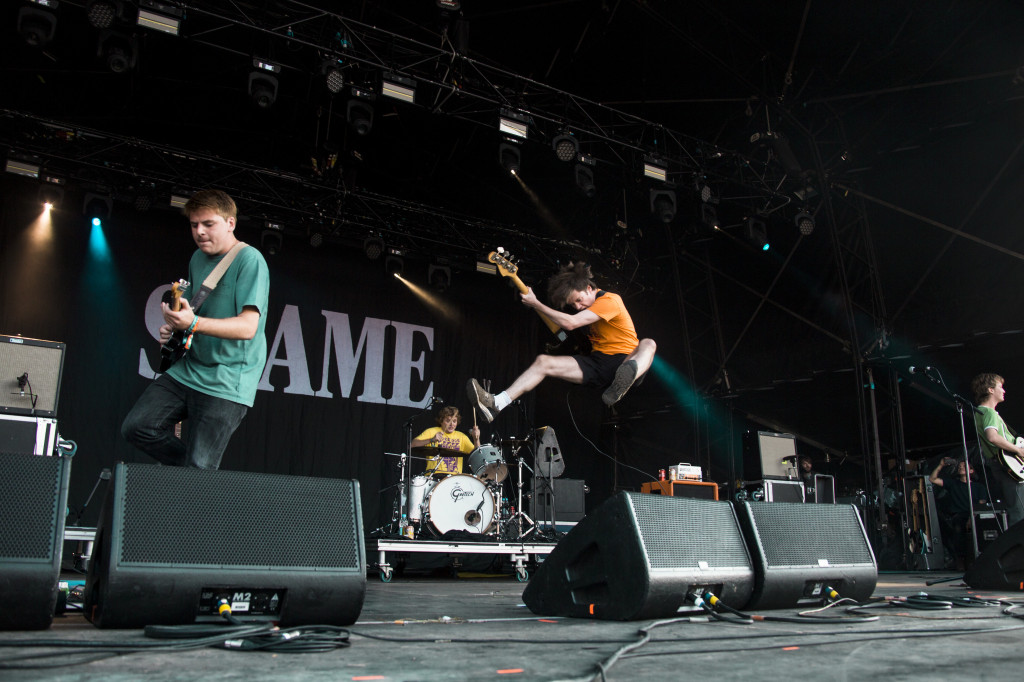 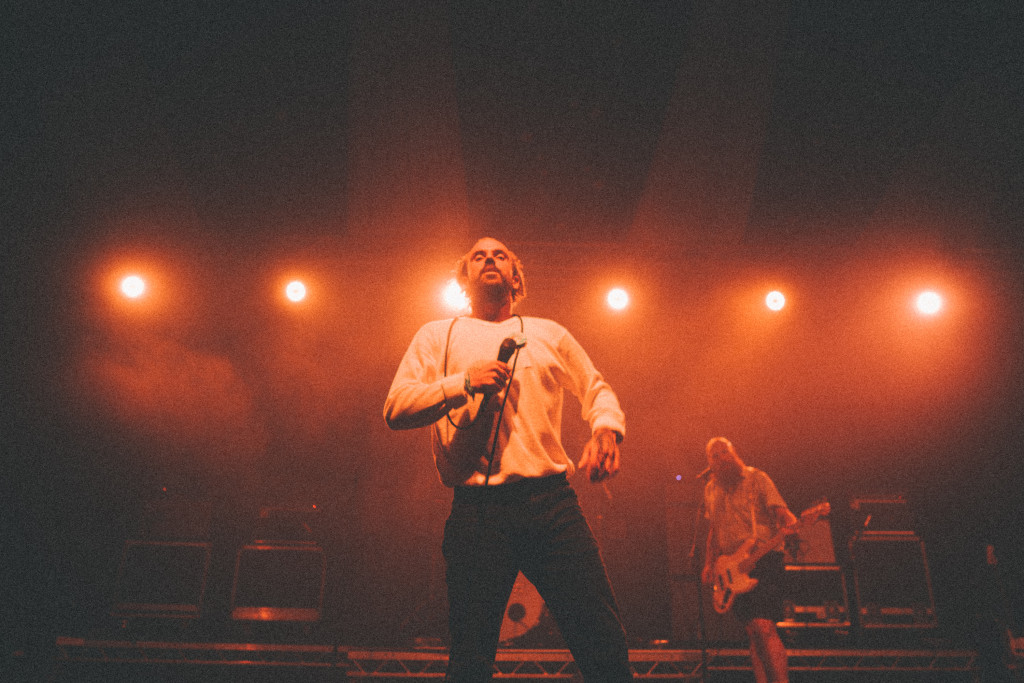 The worst-kept secret set of the weekend, you can hear Black Midi’s guttural noise stretch out across the whole festival Sunday evening, glued together by Morgan’s astonishing drumming. I’ve seen Black Midi so many times this past month that I’ve now taken to watching the audience’s reactions gleefully; half of them confused and slightly disturbed, trying to piece together just exactly what they are watching and listening to, the other half bright-eyed and excited, hungry for more. I particularly liked when the guitarist did an impromptu front flip on stage, mainly cause it was fucking strange to watch, but also because it was the first time the decidedly awkward band collectively cracked a smile. 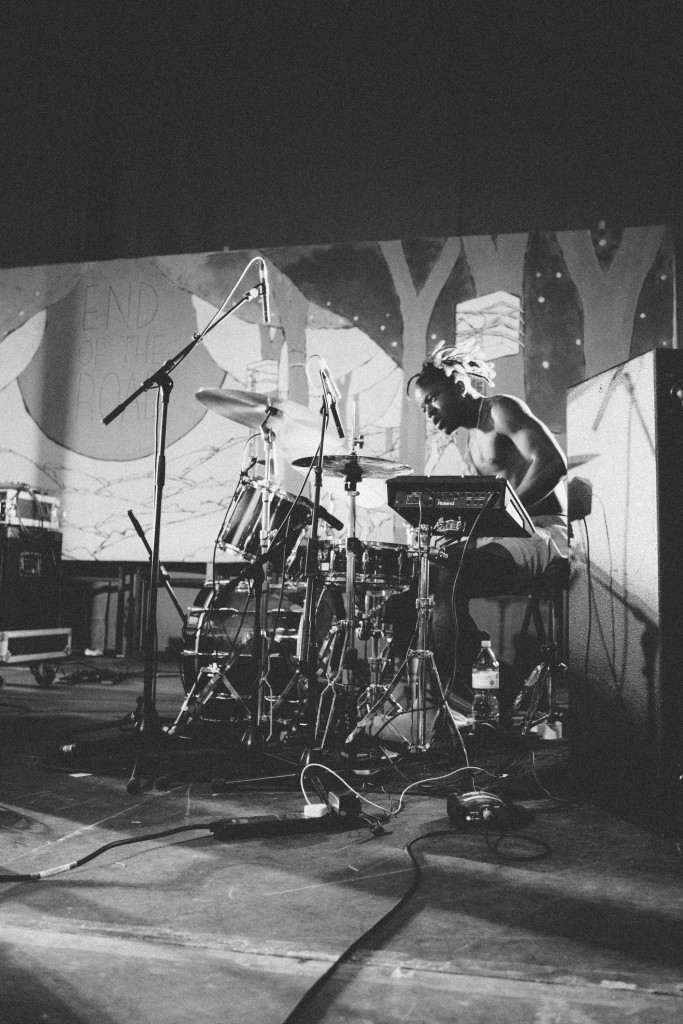 I’m drunk and it’s about 1am when Snapped Ankles take to the stage. On first sight, they look like four giant Ewoks until their pulverising beats turn them in to a whole other entity. A grassroots art collective, (for real, they’re covered in fucking branches), they’re driven by a metallic motorik beat that is refreshingly raw. Resistance is fertile. 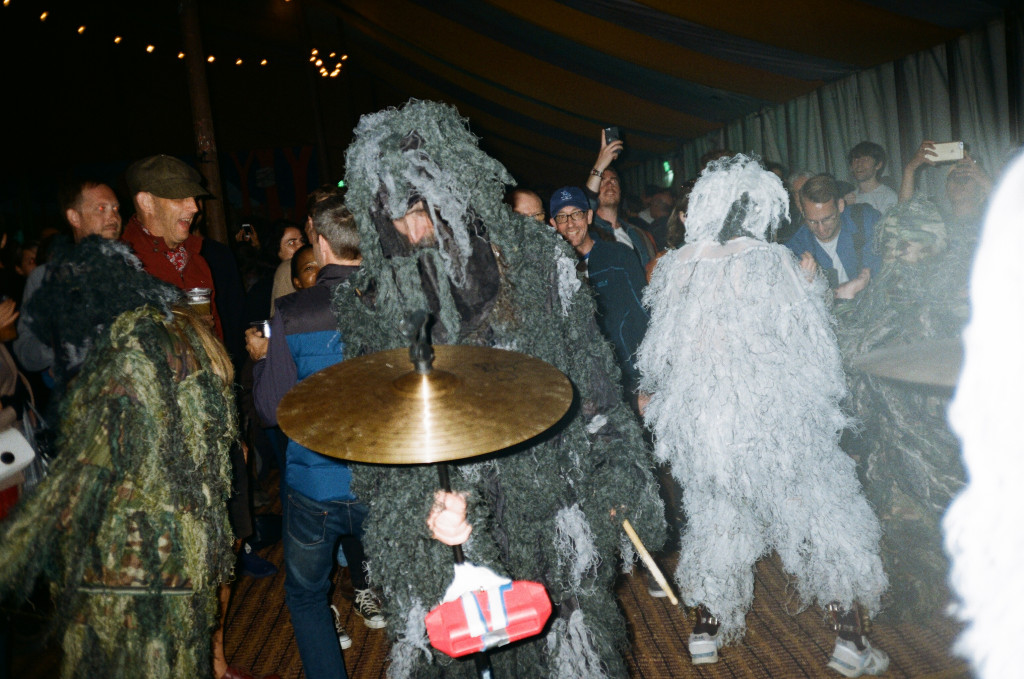