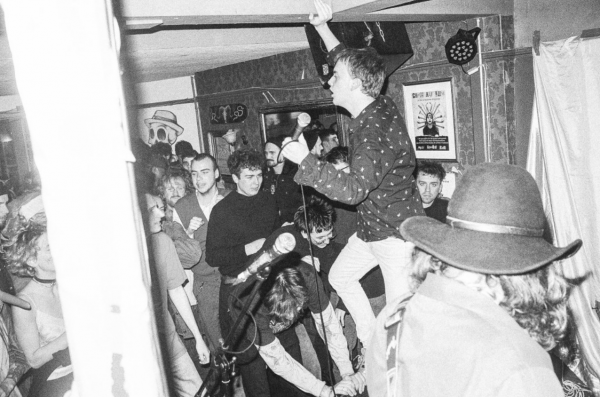 The Old England is a curious venue at the best of times, if only because it’s quite literally your Dad’s favourite mid-week pub with a bare and tiny box space in the back. Its also consequently the hub of one of Bristol’s most exhilarating and notorious bands. Lice happen to call the pub their Bristol home, you’ll catch Bruce serving a pint, or hear an exuberant Alastair admitting to “shooting zombies” upstairs for a pre-gig warm up.

Tonight though pink silk coats the walls, draped by the evocative Spinny Nights who are leaving their mark around the city with their increasingly vibrant and talked-about nights. This is possibly their most memorable show yet, a chapter-defining moment for band and collective who are both cementing themselves as an absolute staple of Bristol’s current outlook.

“About 2 years ago I sent Lice a message asking if we could support them with HMLTD, they very politely said no.” Rafi Cohen remarks tongue-in-cheek on how great the opportunity is for Zebrafi as they tear through an inviting and equally beguiling set. Their spacious yet anxiety-riddle bursts leave you consciously on edge, their music would teeter off the edge if it wasn’t for their tightness as a band, the rhythm section is the understated foundation, while the guitar and keys add unwitting texture. “I’m a saviour, you get the gist” Cohen, eyes shut tightly as he bellows into the mic, is a wonderfully incongruous lead-man, one moment sardonic and mellow the next venomous and unwavering; there’s real weight behind his delivery. ‘Shut the trap’ is their most resonating moment, angular and distinctive stop-starting bursts that effervesce into surprisingly hopeful and placid closure, yet it doesn’t let you catch your breath.

Industrial clanging and an impervious voice welcome LICE to the smallest stage they’ve played at all, let alone in Bristol, in months a little before midnight.

Gareth and Bruce start an abrasive rhythm line before Silas and Alastair join them to manic screaming from the crowd. Alastair immediately climbs the monitor, hanging onto the ceiling as he looms defiantly over the crowd, with an air of maniacal deviousness in his eyes. There’s a Slipknot-honouring gimp mask, there’s crowdsurfing from the off, it’s pandemonium. Santa is even here at the front for fuck sake. 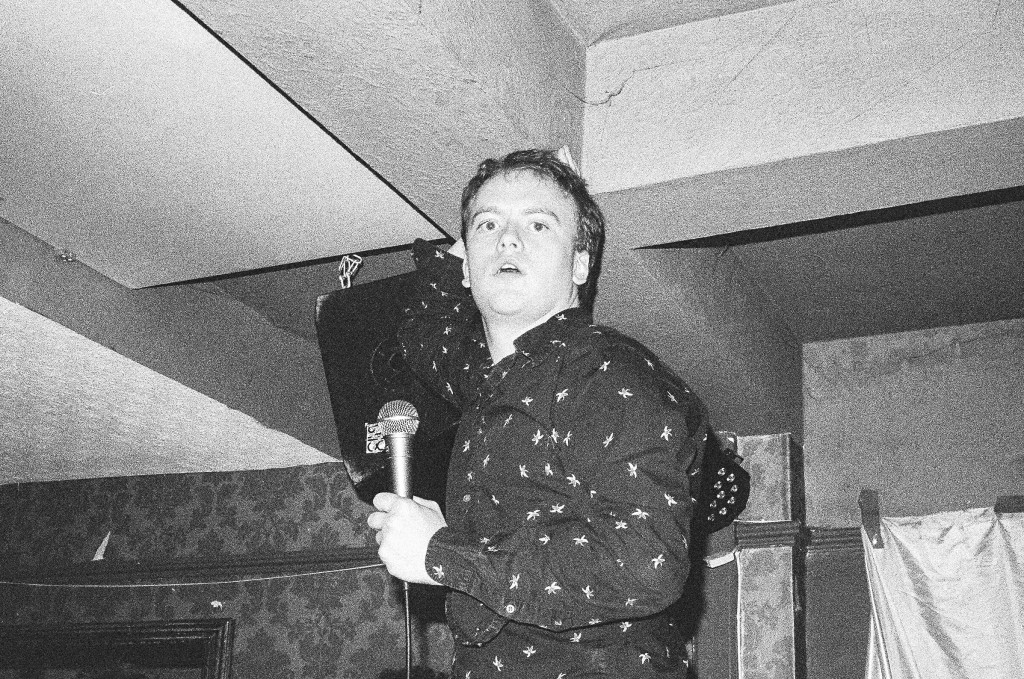 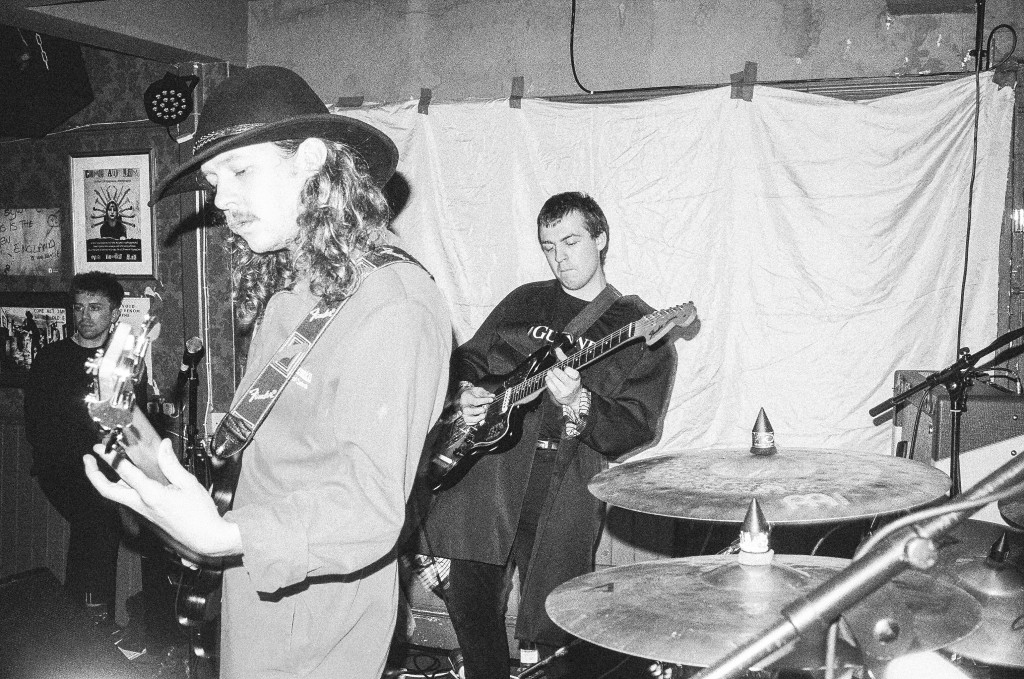 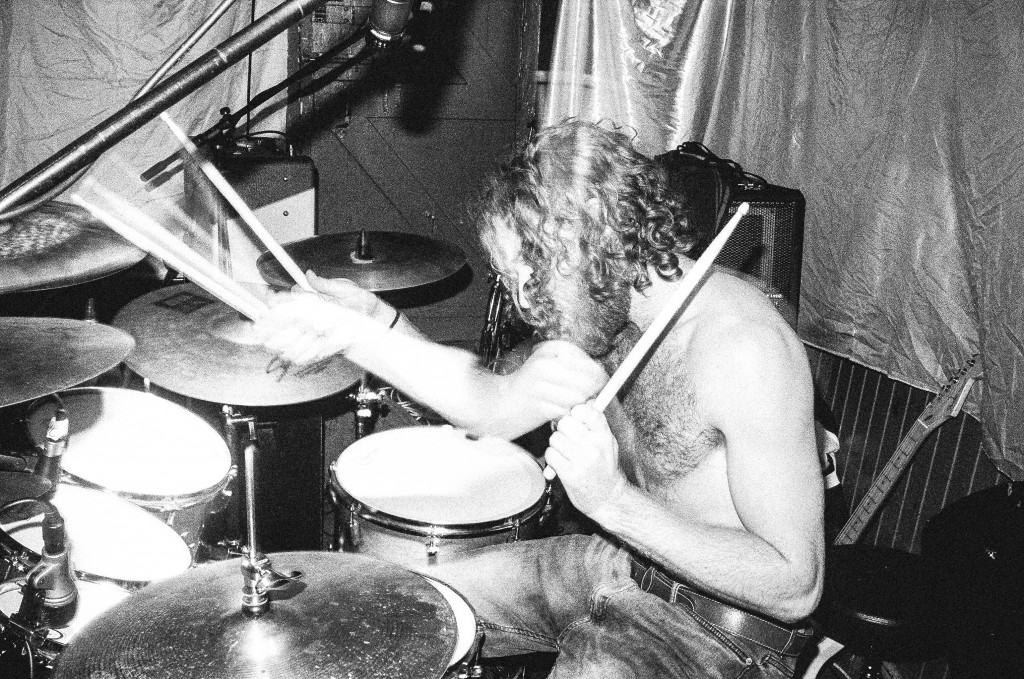 Pure bedlam unfolds, Alastair surfs the monitor as the crowd literally unfold themselves in front of him, all the while Lice sound absolutely feral. The new songs are punishing, ‘Conveyor’ possibly the most melodically enrapturing thing they’ve ever done, yet by no means is it anymore accessible. ‘Imposter’ squeals with distortion before descending into a dose of unsettling EBM that contorts and oscillates Alastair’s vocal.

There’s a pulverising intensity to them but a new found sense of focus, the rhythms feel more undeterred yet tighter, more caustic.  They instill this sense of ferocious liberation live, while Alistair’s lyrics may not traverse the live setting as piercingly, his energy and devout intensity does enough to share their cause. vocal. Experimental hero Harry Furniss adds some piercing and pertinent improvisational trumpet throughout the set, while the crowd sweat and ache with pleasure. 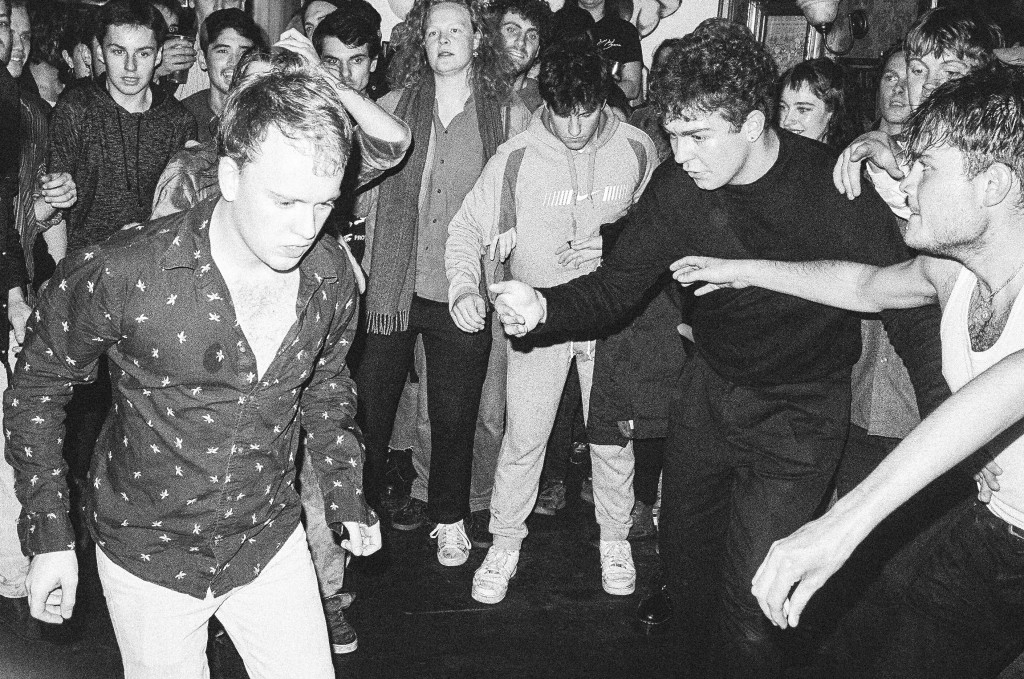 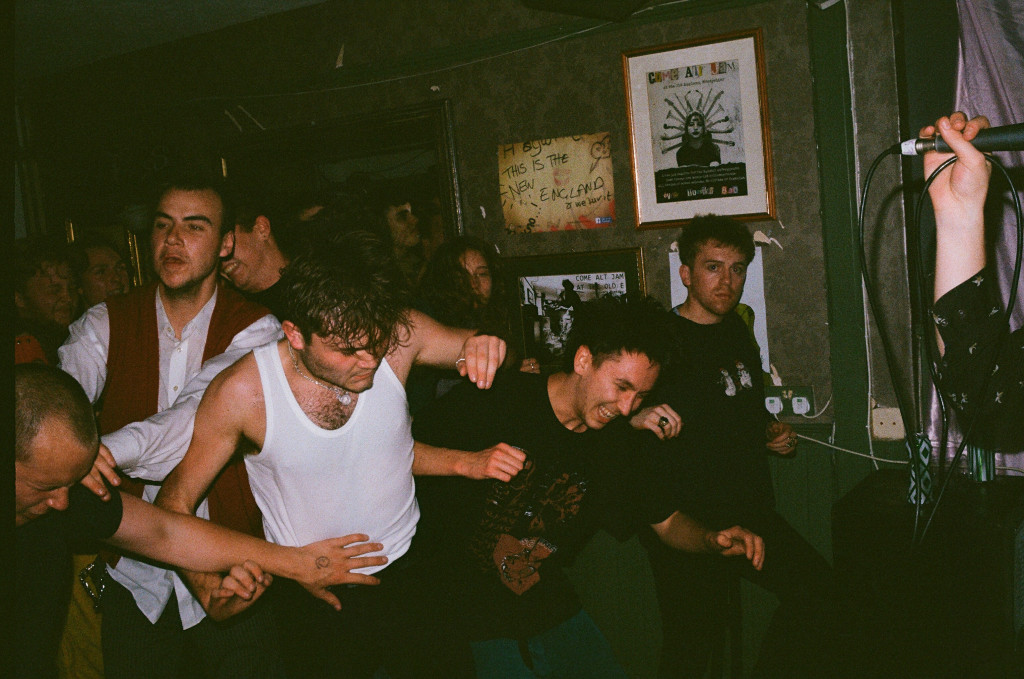 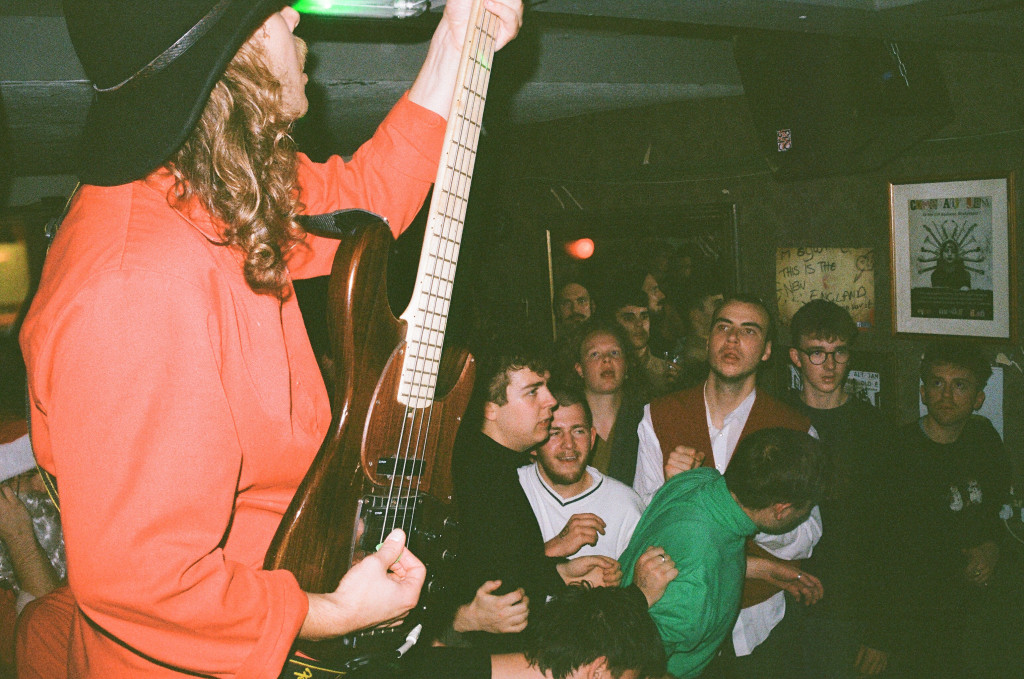 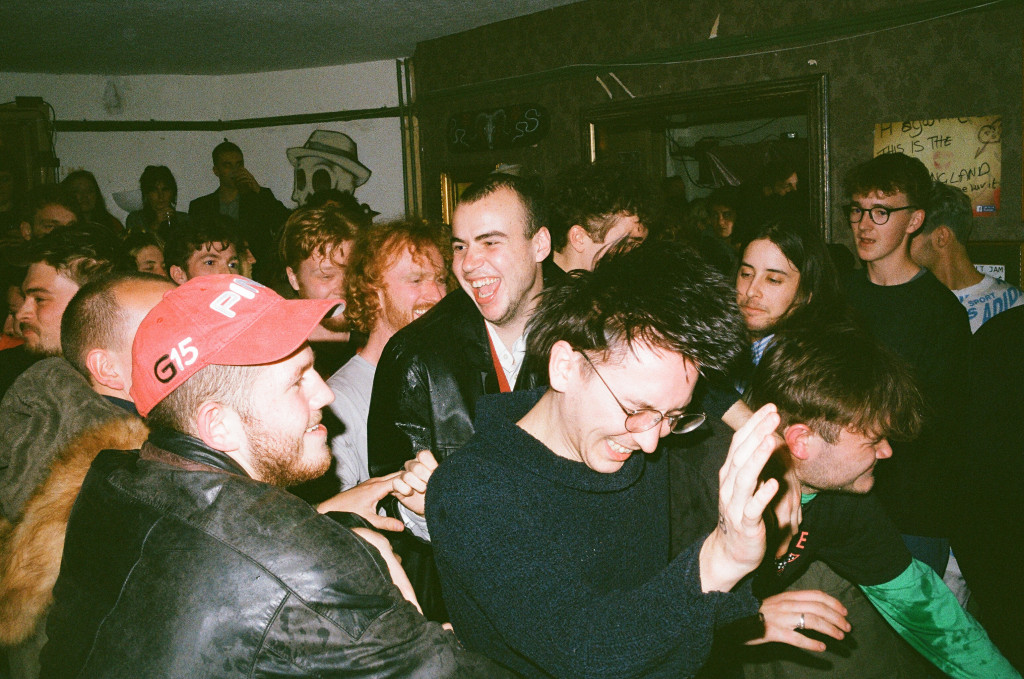 The crowd sing happy birthday to Alastair before Lice descend loudly into the caustic cut ‘Pariah’, before ‘Little John Waynes’ allows an individual in a horse mask to make their unsettling introduction and leave its own mark on the already torn-up crowd. “And it all worked great” Alastair shouts as strobes illuminate him, and under the intensifying rush of the crowd and a decimating ‘Saccharine’, they leave us with the answer that Lice are just perhaps the UK’s most exhilarating band. 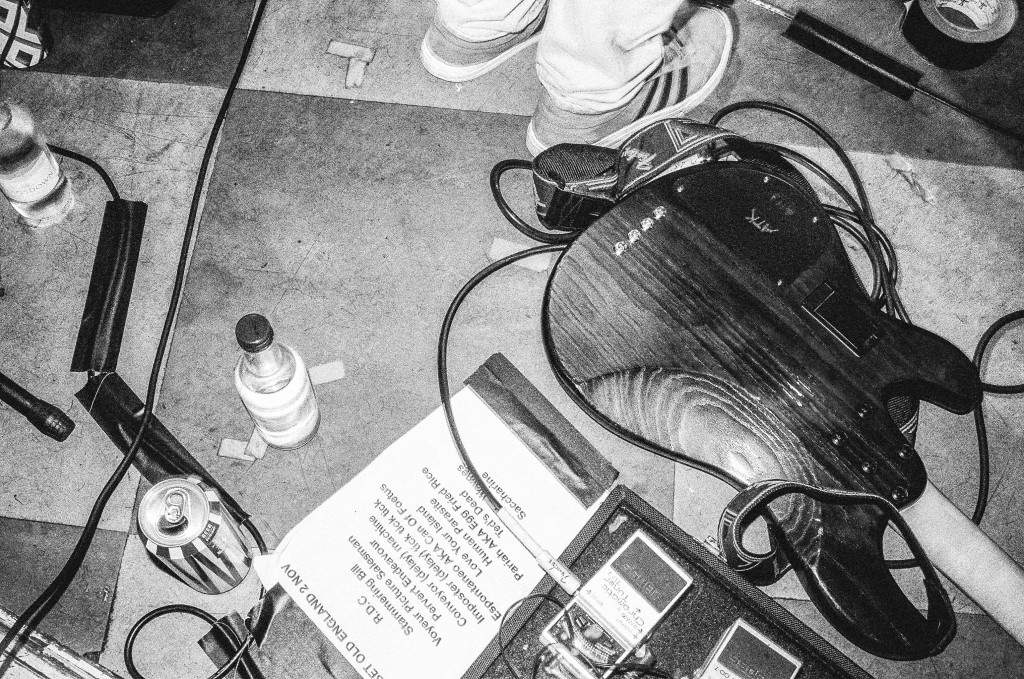