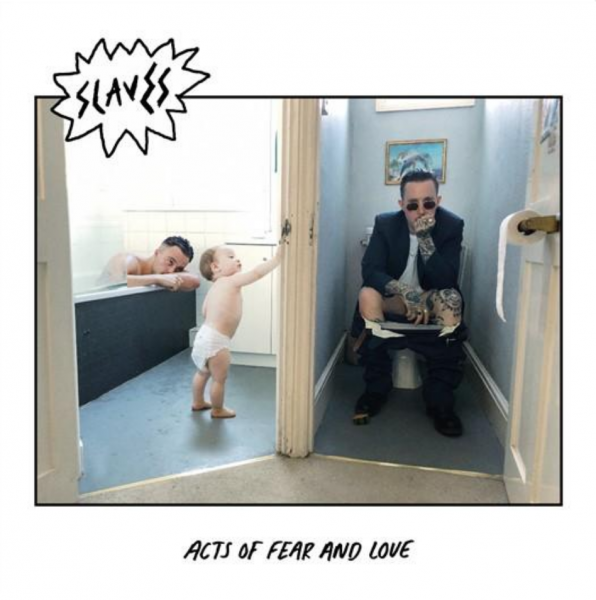 On the release of their debut album- ‘Are You Satisfied?’ – Slaves were confronted with a strange degree of attention for a punk duo from Kent. It mainly concerned their explosive live shows and shrewd ability to cover some of the more unexpected hits of the time like Skepta’s ‘Shutdown’. However, the band received some opprobrium from a certain kind of well-meaning busy body. Why would a band of two white dudes call themselves “slaves” a Fader op-ed famously asked?

To be fair to singer/drummer Isaac Holman and guitarist Laurie Vincent, they offered some pretty coherent, if unnecessary, replies to the criticism. “Obviously, lots of words have two meanings – if you said you feel like a slave at work, or I’m a slave to the routine that’s not being disrespectful to the slave trade. You have to use words, or you’re just going to be scared of everything”.

As articulate as this point remains, they did forget to mention that Slaves is, all things considered, a pretty apt name for a band that represents a genuine alternative to much of what is subjugating about music, and life today. Through their invective lyrics and unconventional aesthetic; Slaves have become a two-man repudiation of all things consumerist, modern and slyy pernicious that dominate our rubbish modern lives.

Except unlike Blur a generation ago, Slaves do not proclaim Modern Life to be Rubbish they proclaim it to be almost unremittingly pointless and unjust. Except of course for the occasional moment when it’s either hilarious or brilliant. No wonder Isaac’s wails and Laurie’s riffs convey so much anger. Slaves are ultimately a band that have a lot to be angry about.

‘Acts of Fear and Love’ opens with ‘The Lives the Wish they Had’ a searing take down of Instagram narcissism and opening line “Poolside-poses, but don’t fall in/You’ll remove the golden glow from your otherwise pasty skin” is genuinely funny. Magnolia’s memorable chorus is a neat metaphor for the monotony of suburban life. If the album’s opening half showcases the band’s embrace of more conventionally expansive songwriting then the halfway point provides a glimpse of Slaves’ empathetic side. The emotive lyrics and plaintive chords on ‘Daddy’ perhaps paint the song’s protagonist as the clearest example of a slave on this record. It’s hard not to feel empathetic for such a pathetic figure, especially when he’s “spending like it’s nothing because he doesn’t know how to make friends”.

The album ends with its title track ‘Acts of Fear and Love’ and is possibly, the greatest example of the ideas and talent that have been driving this band forward over the last half decade. It marries a spoken word verse, complete with soft harmonies and chiming riffs to a raucous chorus that will have you screaming your lungs out. It’s a fitting end to a short album that’s brim full of ideas.

On their third album, Slaves have found a heavier, more festival ready sound without abandoning their punk roots and for that they’re to be applauded. After all, they’ve managed to make an album that deconstructs the rituals and rhythms of modern life without, itself lapsing into cliche or routine.

Listen to the album in full below or order a physical copy here.