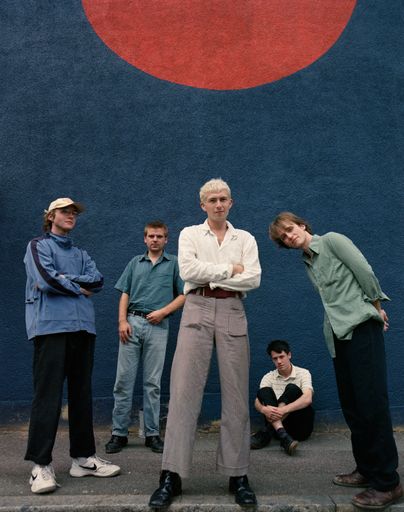 The all important second album. Arguably a more crucial undertaking than the first. An arduous task, convincing hard-nosed musos of your virtuosic worth or budding fans that they need to purchase each and every one of your vinyl bundles. Poised over a blank canvas of sonic realms untouched, one thought springs to mind: “where to begin?” Turning an unperturbed blind eye to these fledgling pitfalls, household favourites Shame may well have the answer. Emerging fresh faced and chomping at the bit from a near on three-year slumber, the South Londoners have announced their long-awaited sophomore LP ‘Drunk Tank Pink’.

A wonky-pop taste of what’s to come, the single ‘Water In The Well’ unearths paper-thin cracks in the band’s often formidable exterior – and in all the right places. As strident guitars pulsate around sporadically skewed percussion, the melody is both sharp in substance and playful in its delivery. A stone’s throw away from the impassioned raves of former years, ardent frontman Charlie Steen opts for a more jocular, yet similarly compelling, approach. As the chorus gains momentum, the rest of the band get thoroughly stuck in, accenting his retorts with scuzzy-tinged harmonies chanted in feral unison. This positive shift in sound stems from a need to adjust between ‘life on the road’ and ‘life at home’, suggests Steen: “When you’re exposed to all of that for the first time you think you’re fucking indestructible,” he notes. “After a few years you reach a point where you realise everyone needs a bath and a good night’s sleep.”

Not to shy away from their grassroots beginnings, the track’s accompanying music video sees a DIY ethos permeate through its polished exterior. Pushing a broken-down motor along a grey-shaded back ally; standing in front of a green screen with that windswept hair look from the fan just out of shot; candid band scenes captured on the camera with that 90’s VCR setting – sound familiar? Whilst executed with meticulous flair and finesse by director Pedro Takahashi, the visual suggests that the humble five-piece haven’t forgotten to have a whole lot of fun amidst the professional whirlwind in which they now operate.

A striking follow-up to the release of ‘Alphabet’ earlier this year, Shame are treading their heads above industry waters with ease. Assured in their sound and confident in their conviction, album two promises all the punch of ‘Songs of Praise’ whilst walking on the sunnier side of the street.

Photo of Shame by Sam Gregg