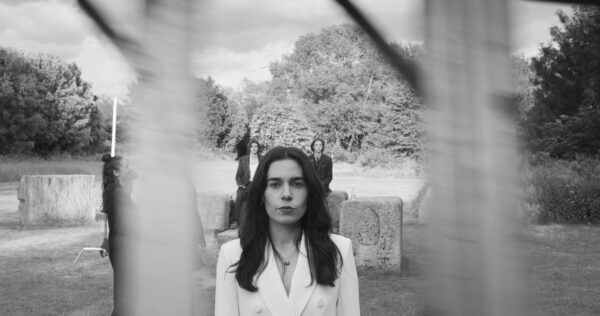 With her work published in highly regarded literary journals, such as the London Magazine, Sinead O’Brien’s poetry has been making an impact for some time now. But it was via a collaboration with musicians Oscar Robertson and Julian Hanson, that the writer landed on an addictive post punk groove that allowed her words to pack the biggest punch.

Following on from latest single, ‘Taking on Time’ – released on Dan Carey’s, Speedy Wunderground label as part of its 30th single series – O’Brien has just released an accompanying video. Shot entirely in black and white, the film captures the timeless beauty of still photography, with O’Brien’s crisp white suit contrasting the harsh charcoal of the sky. Exploring ideas expressed in the track, such as the transient nature of the image, the trio are styled on screen for the perfect shot, only to be moved on and re-pampered for the next. A film by Dimitri Lambridis, it is a striking yet thoughtful video, proving that style and substance are not mutually exclusive.