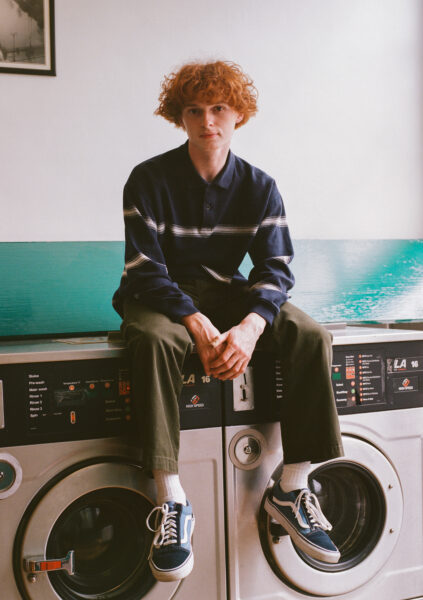 Skinner’s newest venture stays true to the moody yet summery sound we heard on his 2021 EP, ‘Gunge’. ‘The Slump’, sees Skinner throw his voice into a relatable release of exasperation. Through his lackadaisical vocal delivery, he maintains a nonchalant coolness that translates perfectly through the single’s accompanying DIY video.

The first single Skinner has released via Faction Records, ‘The Slump’ is marked by Skinner, 24-year-old Aaron Corcoran, as a record that sets out to contradict in every sense. What it is to be in a “slump”. The track squeezes “something fun” that you can dance to, out of the idea of nothingness, and those “periods where every day feels like a slap in the face”.

‘The Slump’ opens with skewed notes before diving straight into driving vocals and a bouncing percussion. The track continues into its angular guitar and bass-heavy chorus, providing a sturdy foundation for Skinner’s short and snappy repetition of its’ overarching call, “I’m in the slump.”

With high energy repetition, ‘The Slump’ is tireless and oozes a fun spirit from the first note. The single is paired with a video directed by Conor Beegan and Skinner himself, and is an obscure one-man show in front of a green screen; managing to match the charm of the single itself.

Closing in the wake of a glorious sax solo​​—a familiar feature from his previous tracks— ‘The Slump’ acts as a kind of palate cleanser, in its interruption of the steady repetition. Hitting its target of being fun and energising, Skinner has crafted a single that could undoubtedly pull you out a “slump”.