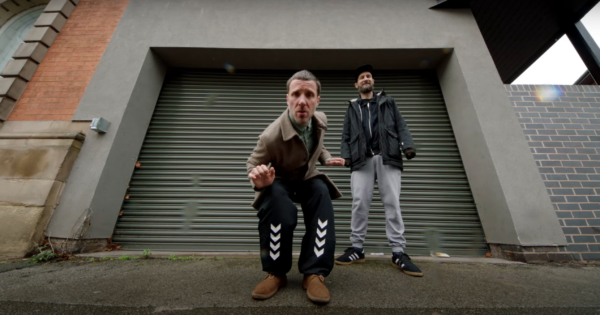 “Reduced circumstance isn’t a pantomime. If you haven’t lived within its confines don’t use it to enamour your ideas.” – Jason Williamson, Sleaford Mods.

A year into the new decade and we’re psyching ourselves up for the long road to hell and back as Sleaford Mods share ‘Nudge It’, (ft. Amy Taylor of Amyl and the Sniffers), ahead of their sixth studio release ‘Spare Ribs’- out January 15th, via Rough Trade Records.

Keeping up attitudinal appearances is mere child’s play, if the aesthetic is appropriated recreation. When life’s meter is racking up minutes left in the parked minds of our finite futility, it takes more than a pocketful of loose change to renew a person’s circumstance but only two, melodious maverick’s and a breath of fresh air from down under, to override the paraded tirade of systematic herd insincerity, and stationary progress.

An onion, in all its foundational layering’s and communal essentialness may well perpetually stain the hard-grain surface of humanities chopping-board but Sleaford Mods will always resect bone-dry broil, as the rawest of the bunch.

We chat to Sleaford Mods in the new issue of So Young. Its sold out in print but you can read the digital edition below.