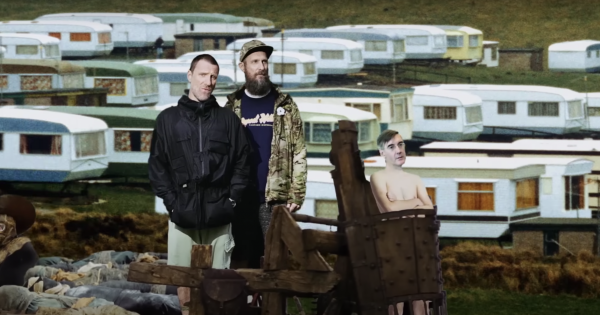 On their latest single, Sleaford Mods strut around the country as angry tenants, documenting all the things that should work, but don’t. As always, Jason Williamson barks some impressive Sleaford Mod-isms such as; ‘Shit, he’s so fit’ (in reference to Putin, obviously), and ‘I want it all, like a crack forest gateau’. With its quasi-message of endurance through escapism, ‘UK GRIM’ is Sleaford Mods doing ‘conscious’ rap; rhyming about sex, drugs, and injustices in a sickening lucidity.

The abundance of whack shit over the past few years has meant that Williamson’s discontent can be seen as virtue signalling, as if he’s name dropping Liz Truss just because everyone else is. However, ‘UK GRIM’ rises above the rest as the product of true artists in an increasingly challenging context, think ‘Banned From The Roxy’ by Crass, or ‘Say No Go’ by De La Soul. Ultimately, Post Punk’s irresponsible uncles are doing what they do best on ‘UK GRIM’; ripping the piss out of modern life over Zywiec soaked beats.