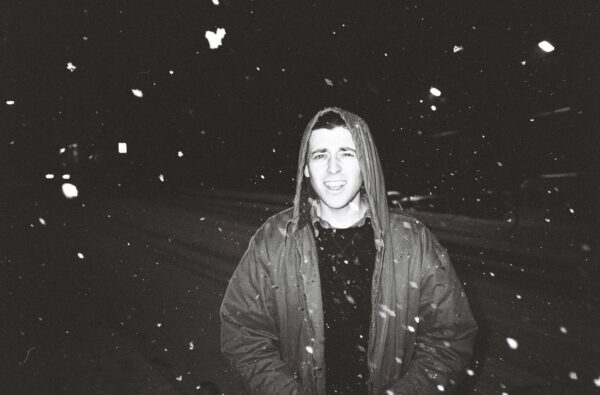 Gallivanting down a terraced street, shiny postbag over the shoulder, SLONK aka Joe Sherrin (Fenne Lily, Milo’s Planes, Let’s Kill Janice) doffs his cap at neighbours who one by one emerge from their modest homes to get behind him.

Like scenes from a building society advert, a swathe of beaming guises look up to the camera, all arms waving side to side in unison like a mass of backing singers with too much enthusiasm, joyfully crying “Joe, just admit you could be a wicked postman”. And it’s not far wrong – in reality the sharp-witted outro was in fact recorded by a bunch of friends from bands such as Happyness, Fenne Lily, Mal Blum and Jamie Cruickshank.

In the bone, the track is an outward pouring of leftover teenage angst, touching on bleak job prospects and questions that are impossible to answer for most fully-fledged and (seemingly) functional adults. Though at first it appears delicate with untampered vocals and a lone acoustic guitar, it quickly unravels into a fete of group harmonies and plenty of unforgettable one liners.

When speaking of the track, Joe eloquently describes the narrative behind it:

“A few years ago a friend of mine asked me what I saw myself doing in 5 years. I had no response for her and thought it was funny that the first and only thing resembling a career aspiration which came to mind was how I unsuccessfully tried to become a postman a few times when I was a teenager. So I wrote this bitter song about this search for aspiration and how it harvested no meaningful response to her question; only an awareness of my self-resentment for not ‘continually applying oneself’ bound together in a piping hot parcel of friendly, reliable sarcasm. However, having spent a few weeks of lockdown temping as a postman, I can confirm to myself that it is a dreamboat of a job.”

‘Postman’ is the first offering from the soon to be released album, ‘Where Do You See Yourself in Five Years?’ out on Breakfast Records.