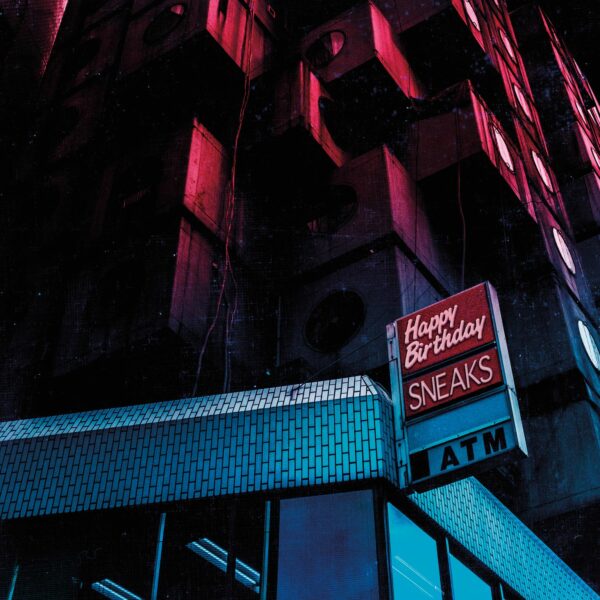 Sneaks doesn’t cater to her audience. Or these are the vibes that I’m getting from her new album ‘Happy Birthday’ – out now via Merge records.

Her previous records while radiating a cool standoffishness, thanks largely to their razor sharp minimalism, were still the tunes of the pouty indie darling. But ‘Happy Birthday’ focuses on Eva Moochlan’s preoccupation with the primal energy of post-punk and the experimentation of electronica, leading to a body of work that is her most confrontational, while also opting for a bold and direct lyricism.

Luring us into a false sense of security, the album opens with the laid back disco fun of ‘Do You Want To Go Out Tonight’ – an excellent opportunity to soundtrack the return to drinking with our mates in our favourite boozers. The epitome of cool, the track does a lot with a little. The glittering synths and tinny drum loop are as simple and contained as Moochlan’s repetitive lyrics but the combination is stirring, creating images of stilettos in the rain and cocktails glistening with maraschino cherries. This sonic stylishness runs through the album, tying it together, like the seamless stitching of a couture dress, which the album could easily soundtrack the modelling of. Even the more abrasive tracks on the album lend their pulsating beats to the sharp cheekbones and high fashion of runway shows.

Speaking of which, selecting ‘Mars in Virgo’ – one of the most difficult tracks on the album – as a lead single speaks volumes about Moochlan’s attitude towards the intention of ‘Happy Birthday’: it is her vision above and beyond commercial viability. The track leads the listener into a trance like state with its dense electronic soundscape which hurts the head a little – as if to say, ‘fuck you, here is my vision deal with it or go home’, while the appearance of the laser synth shooting across the soundscape and dancing around Moochlan’s vocal line, demonstrates a childlike playfulness towards experimentation and songwriting. Moochlan is branching out into more tricky experimental territory but is clearly having a blast while doing it.

While some of my personal favourites of the album are less musically abrasive, their lyrical content and atmosphere are sexually direct. In the past, Moochlan has opted for a lyrical vagueness that places the listener at a safe distance from the personal, but on ‘Sanity’ and ‘Scorpio’ she discusses relationships openly. On the latter her sugar-sweet-sing-song expresses gratitude for her intense and loyal Scorpio companion over smooth synth lines and a sizzling hip-hop beat (Moochlan’s answer to the love song perhaps). Meanwhile, ‘Sanity’ is charged with erotic energy, its sharp trip-hop beat giving way to languid synths, while Moochlan’s talk of ‘[her] eyes dilating’ when she sees a certain someone and ‘the sound of [her] whip ‘when she gets done with you’ feels like a sex positive anthem focusing on female control –  an excellent soundtrack for making eyes at that hottie from across the bar.

But Moochlan’s newfound confidence in expressing her view of the world is not wholly left to the sexual. On ‘This World’ a vibey 808 and bouncy synth work are just precursors to Moochlan discussing her right to create, most pertinently in relation to her identity as a black woman. Similarly, on ‘You’ve Got A Lot of Issues’, a smooth club ready number, Moochlan hopes for a more humanist future.

Above all, ‘Happy Birthday’ is the expression of an artist who refuses to compromise. The illusive golden period that every artists longs for in their career, where they are finally free to experiment in any way they choose, are confident enough in their own skin to express their opinions, and possess such a strong artistic vision that fan expectations and commercial viability become secondary, well Sneaks is already living it. And if you don’t like it, well quite frankly, I don’t think she’d care all that much.

This review originally featured in Issue Twenty-Seven of our magazine. It’s sold out in print but you can read the digital edition below.