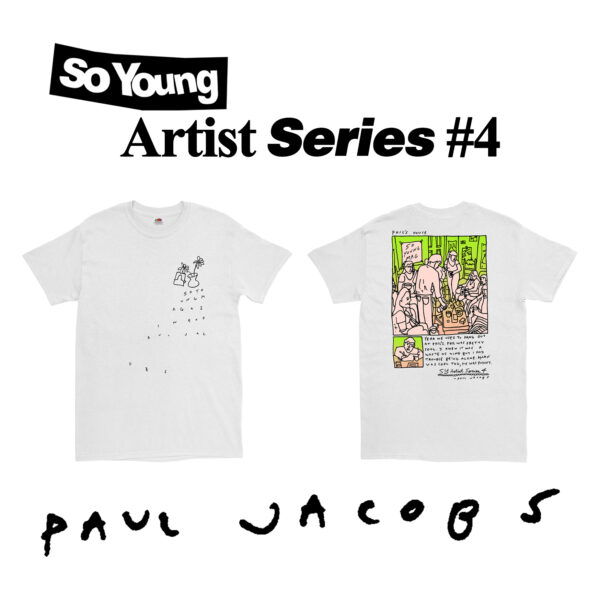 In the fourth edition of our Artist Series we’ve collaborated with Pottery‘s Paul Jacobs, the Montreal based musician and artist has designed a front and back tee for our latest release. We caught up with Paul during lockdown to talk about the project and his work.

For drawing I always go right to pen, I just try to trust every line and go with the flow. There’s a big difference when I’m doing design/illustration for myself or if it’s for someone else. When it’s a personal project it’s normally just something I need to get out of my head, and at the moment of creating it I only need to think about impressing myself which makes it almost a form of self therapy. I feel like most of our best ideas come to us when we’re dreaming, so I try to not over complicate my thought process and just allow those deep thoughts to come out. Most of the time I’m just looking for a laugh though, drawing is fun. 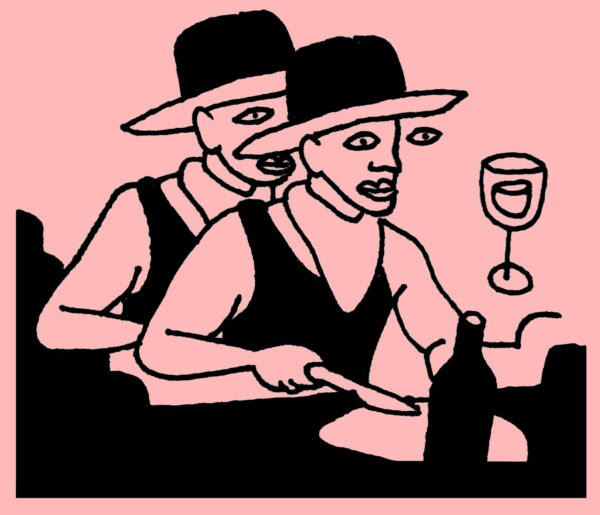 What are the main differences for you between working on an illustration or writing a song?

The thing that excites me about both is just getting something from nothing. I find writing a song to be more like a puzzle, there’s rules and some things that just fit better together. With drawing or painting you can try anything with no real limits or boundaries besides whatever you’re drawing/painting on. The difference really comes down to what do you get a kick out of, hearing or seeing? They’re both great! 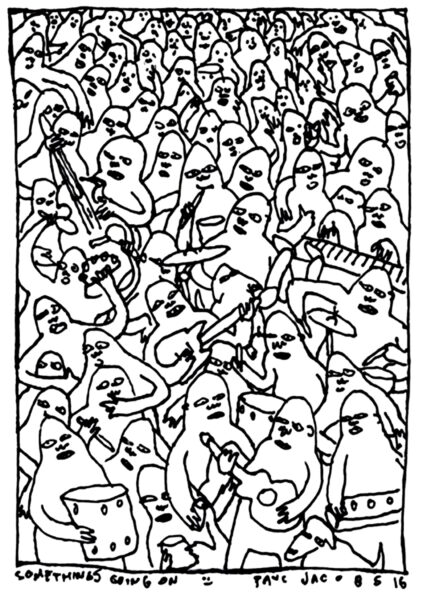 Do you enjoy one process more than the other?

I love them both the same, they work perfect together. I spend more time song writing and recording at home, but there’s always the moments of writers block. When this happens, the best thing is to let it run its course. I feel this is the time we’re able to gather new thoughts and allow ourselves to change. But when I’m not feeling music I can spend a lot of time drawing, so it’s nice. I just like to keep busy, even just building things. When I was younger I definitely spent most of my time building skate ramps and stuff like that. It’s all the same, to just create and not trap yourself in your own head. 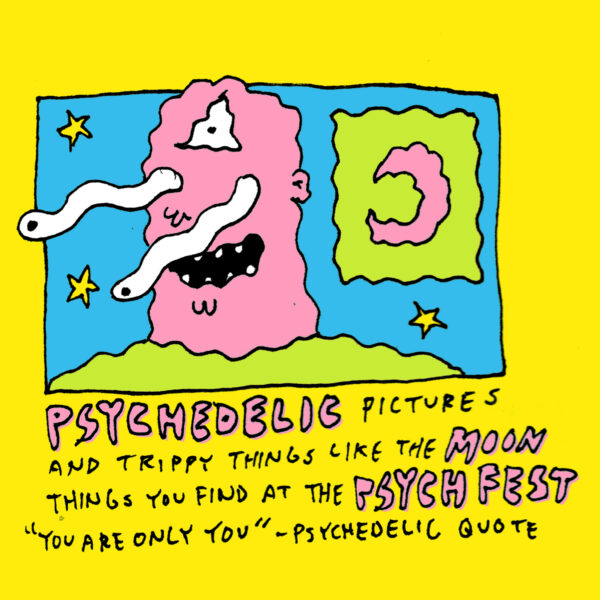 I wanted to do a drawing that went along with the title ‘So Young’. Thinking back when I was young I remember those really boring house parties where I’d sit there silent, just drinking and smoking. This graphic would be like a life drawing in my notebook from that night. Phil is an old friend of mine, and I never had much to say. 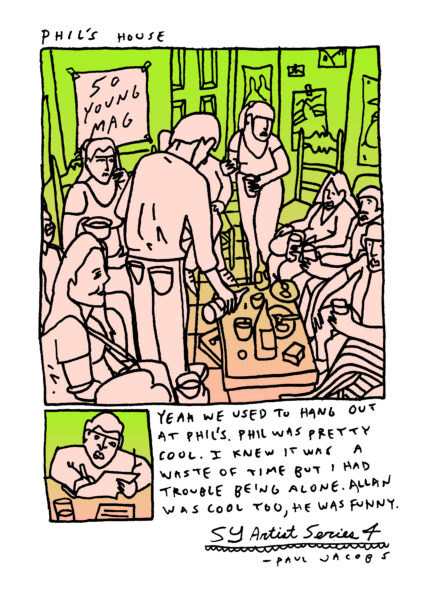 Where do you draw your main inspiration from?

I get a lot from jokes and normal life stuff, working, feeding yourself etc. For a lot of what I do I just try to recreate a deep feeling like the ones you get from remembering your dreams or “deja vu”. I feel like a major part of who we are is from what happens when we’re sleeping, like dealing with somebody that’s trying to kill you, or just spending time in some bizarre reality with characters like that guy from Walmart that was looking at those pans. It’s strange to realize you’re actually dealing with these situations as if they were real. Also I get inspiration from analyzing my past and childhood, a lot of things we look back on and cringe at the thought of, or try to erase. I just hope to be able to pass what I feel with others through what I make, in hopes that they can relate and feel okay with life.

What started me off was Lego, the illustrations on the instructions and drawing the lego people, I was completely obsessed with it as a kid. Next for me was with skateboarding, during the 2000’s it was all about logos all over everything. Looking through a skateboard magazine was page after page of cool graphics, logos, design and photos. Then when you’d watch a skate video you’d hear music that you’d never get the chance to hear as a kid in a small town. But the impact I really remember feeling was after watching “The Devil and Daniel Johnston” just seeing his room with all the stuff he made and his passion. Also, the Simpsons with all their characters and background illustration on T.V. before dinner everyday. 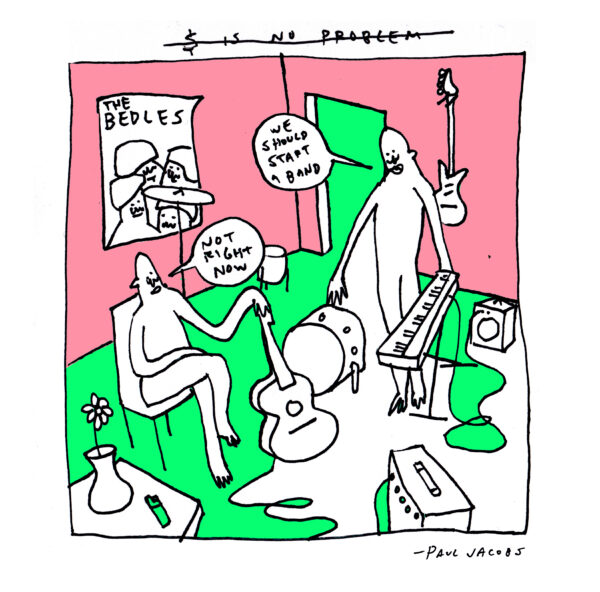 Tell us about a typical working day…

Well, when I’m not “working”, aka I don’t have to leave the house to do some day job to pay my rent, I just have coffee with Meagan and hang (That’s what I’m doing right now). But in the morning it’s the best time to go over lyrics or just doodle some ideas, the mind’s sort of in a weird state. Then maybe it’s the coffee buzz, or nicotine rush, or anxiety from the toke of weed, but I need to complete whatever decent idea I get before the day is over. I’ve gathered enough tools through my life where I’m able to do everything I love to do from home, which is great.

Whose work do you admire and why?

I guess I’d have to say the Simpsons, even though that’s a team of people. But those early seasons were just so great in so many ways. There’s so many things from that show that pop out in random parts of life and you’re like, ahhhh that’s what they meant. It’s cool, the show’s like the 20th century Bible, you can study it and find how it relates to your life. There’s a lot of great art and music out there though, I really love Cass Mccombs and what he does, I feel like there’s a deep honesty in his music. Also Ariel Pink has been pretty big, when I heard his music it was a whole new world. And another for visual would be Robert Crumb, I don’t really get too into visual artists but I found one of his books at a thrift store and it helped me realize that I still had a lot to learn about pen and ink drawings. 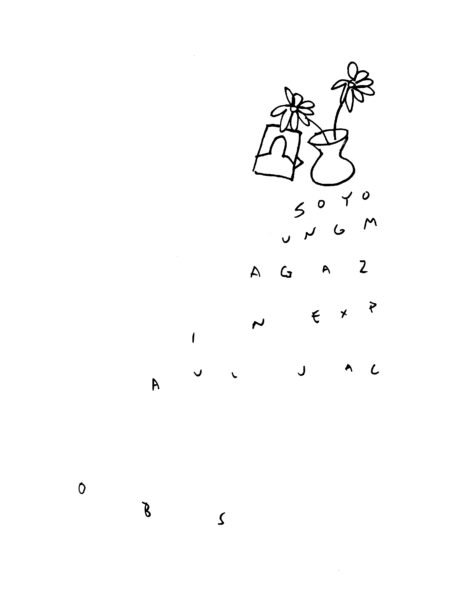 What projects are you currently working on?

Right now I just finished another solo album that I was writing/recording between Pottery tours and my day job during 2019. As we know, there is no work or tours so I was able to get that finalised with the track listing, artwork and preparing for mastering. There’s not really much graphic work to do for bands since there’s no tours, so I’ve gotten back into writing and recording more songs. I’ve just been spending full days making music and it’s pretty cool, but when I’m in the writing phase I can’t do anything else, I get a real kick off of making songs, it’s addicting. I do have some voice memos and comic strips I’m planning on animating when the time comes.

You can find our collaboration T-Shirt with Paul Jacobs here.

Pottery are on the digital cover of the new issue of So Young. It’s SOLD OUT in print but you can read the digital edition below.