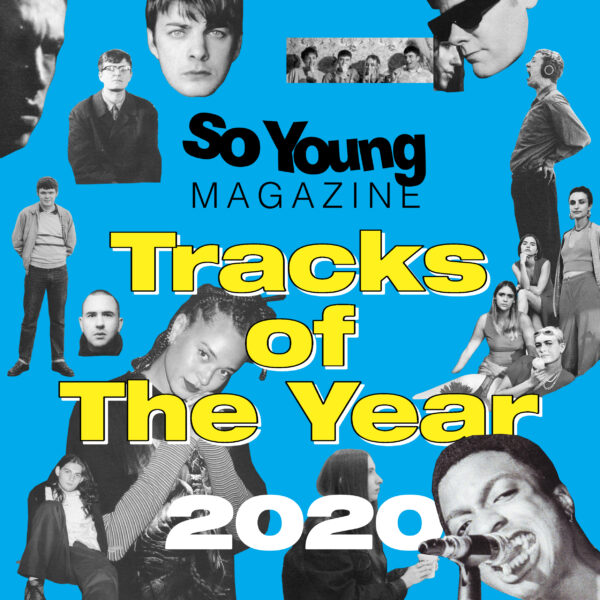 As we see off a wretched and unpredictable year, it’s exciting for us to look back on a prolific twelve months of releases.

In a year where we haven’t been able to go out and find our new favourite band and likely, our new favourite song in our favourite small venue, we’ve relied upon the power of recorded music and the bravery of bands to release Singles, EP’s and Albums in this weird old time. Some avoided the pandemic, some were delayed and some were made in lockdown, but there’s no doubt in our minds that these songs define 2020 for us at So Young. In no particular order, please find our favourite tracks of the year as chosen by our writers.

LL Burns – Get Me Back In The Game

The elusive LL Burns emerged earlier this year with the fantastic ‘Get Me Back in the Game’, and then seemingly vanished off the face of the earth. The track is a gorgeous sliver of noir, with bass slides, atmospheric horn and synth work, and vocals taken from the mouth of God himself coalescing to something both heartbreaking and copacetic. I truly hope we see LL Burns again come this next year. – Dan Pare

Just gonna put it out there, I am a little bit in love with Alex Sebley, Jessica Winter and the whole sound and aesthetic of PREGOBLIN. “Gangsters” has stuck with me through this last quarter, even when standing in front of the bathroom mirror brushing my teeth, splattering foam as I drearily proclaim “You like money, but you don’t have money”. A huge sounding track made all the more better thanks to the aforementioned sobering lyrics. Cannot wait to see what they release in 2021. – Emma Flynn

Chubby and the Gang – All Along The Uxbridge Road

West London’s Chubby and the Gang released debut album ‘Speed Kills’ via Static Shock early in 2020 and have since signed to on form Partisan Records and released the album again. ‘All Along the Uxbridge Road’ is one of many that could’ve made the list but is possibly the track that ties the band together. Shit and spit punk energy meets good songwriting for something which psychs you up for the day ahead and doesn’t leave your head for the rest of it. – Sam Ford

When London’s Connie Constance, a Black-British woman, realised her label weren’t ever going to view her as the Indie-goddess she truly is, Constance went and started her own ‘Jump The Fence’ label in retaliation. A badass with choruses for late night mis-sensibilities and a restless resilience – we should all aspire to be more like Connie Constance when we grow up. – Al Mills

Goat Girl have done it. They’ve successfully navigated their way from buzz band to genre staple, broken away from the distinct sound of their first album, and reinvigorated themselves in a way that nods to their earlier work, whilst making it clear they are onto something new. “Sad Cowboy” is a sprawling 5 minute masterpiece of looping synth and rhythm, whilst Clottie Cream dollops her dryly acerbic vocals over the top. Makes the prospect of a new album seem all the more appealing. – Dan Pare

After a 4 year hiatus, Chichester’s finest export Traams returned with a searing catalysmic krautrock meets post-punk sonic stew that is ‘The Greyhound’ and it really was well worth the long wait. Clocking in at just under 10-minutes, ‘The Greyhound’ was an aptly reminder that Traams aren’t anywhere near done and that they’re back for the crown as one of the finest bands in the land… – Brad Sked

The acoustic title-track off her phenomenal debut album, I first saw Katy perform ‘Return’ at The Social way back in August 2019 and I WEPT. Few songs punch me as beautifully hard in the ribs as this track does, and I had to wait over a WHOLE YEAR, watching low-quality, shaky live recordings on YouTube and frequenting her gigs to hear it again. Instant classic. Instant lump in my throat. – Cameron JL West

Putting a smile back on our forlorn, pandemic-worn faces one outlandish retort at a time, we give you the Leeds hailing four-piece, Yard Act. If Sleaford Mods decided to pick up guitars and start a minimalist rock outfit, you’d be pretty much on the money. A hotbed of jagged-edged riffs and relentless hooks, their debut single ‘Fixer Upper’ made a rousing entrance to the scene. Seemingly without pausing for an ounce of breath, the track thrives on frontman James Smith’s forthright persona. Ever encountered a ‘Graeme’ who won’t shut up about his “two homes and a Rover that came from hard graft”? We expect so, and the northerners have got him nailed. – Laura Pegler

This was the head-bopper, the repetitive groove that I needed during lockdown. CMON basically came out of nowhere and released an album on Mexican Summer, one of the best labels around. The production which throws constant surprises and the repetitive electro-drum roll out somehow makes you forget that it’s pretty much the same words throughout. I’m humming it as I type. – Jamie Ford

Ethan P Flynn – What You Do To Me

Head to Ethan P Flynn’s Spotify bio and you’ll read ‘Professional Musician, Amateur Outdoorsman’…a notion that you’ll hear throughout debut ‘B Sides and Rarities: Volume 1’ which was released via Young Turks this year. Contrary to my ‘Wrapped’, ‘What You Do To Me’ is the track I remember pressing play on the most in 2020. Timeless songwriting, a bit sad and so very catchy. It’s avant-garde pop at its most enjoyable. – Sam Ford

The machine that is Fontaines D.C. continues rumbling along, and shows no signs of slowing down. They’ve been marked as the next band to go truly stratospheric, and on the strength of tracks like this, it feels a matter of ‘when’ rather than ‘if’. Having said that, we here see Chatten and co. actively searching for antithesis to the sonic successes of their first album, going down the dark rabbit-hole of anxious, frisked bassline, ice-cold guitars, and contrarian lyrics. Wicked. – Dan Pare

The Wants are fucking cool as. Featuring members of Bodega, their debut record ‘Container’ is spectacularly drummed into such socially disproportionate, thematically angular-angst, it’s become the only acceptable supply to bring with you on future night tube excursions ‘past 7:30’. – Al Mills

2020 saw the long-awaited release of Hotel Lux’s debut EP ‘Barstool Preaching’. Usually found chanting hard-nosed tales of woe whilst staring into the bottom of pint glasses half empty, this unassuming love song was somewhat unexpected – and undoubtedly one of their finest. Underpinned by melodic riffs you can’t help but whistle along to, our relatable raconteur Lewis Duffin tugs on those forgotten heart strings with his unequivocal lyrics. Daring to bare their sensitive sides, the single is a bruising yet necessary release for the pent-up post-punks of this world. Add Thomas Brodie-Sangster all grown-up and starring in the track’s accompanying music video, and the single is two steps ahead of your average romantic musing. – Laura Pegler

Malady  – London, I Love You but You’re Bringing Me Down

The debut single from one of the capital’s most exciting new bands, Malady is in some way an oxymoron. Displaying the quartet’s incredible songwriting with what is dream pop meets indie-bliss with addictive choruses by crooner Percy Junior Cobbina that seep far into the consciousness, whilst also lamenting the relentless gentrification of their beloved city – it’s an extraordinary contradiction and showcases that socially conscious music doesn’t always have be so angry and dark. – Brad Sked

Is there anything Jarvis Cocker cannot do? Not content as the king of awkward sex appeal or any of the other titles attributed to him, new project “JARV IS…” finds him breaking new ground. “House Music All Night Long” is complete with reimagining of a club setting within a hub of domesticity. (Geddit, House music? I’m sure that this alone made it the soundtrack of countless Zoom parties). It’s intelligent, life-affirming and genuinely danceable – yet still containing the knowing lyricism that marks it as unmistakably Cocker. – Dan Pare

“It’s a Tokyo bouncy ball, It’s an Oslo bouncy ball, It’s a Rio de Janeiro bouncy ball…” have you had any other lyrics in your head since November? Dry Cleaning’s first release with label 4AD is probably my favourite to date and that’s no mean feat if you consider how good ‘Sweet Princess’ is!. Pairing spikey drawl and personal tales to build their reputation in 2019, Dry Cleaning have grown in stature when it comes to songwriting in 2020 and now go beyond the expected angular lines of post-punk spoken word. Repetitive guitar lines now progress into pop hooks but don’t expect vocalist Florence Shaw to switch up the tone. The sceptic in her may be here for life but we’re here for it. – Sam Ford

The illustrious Baxter Dury continued his journey towards an elder statesman of sophisticated sleaze on March’s album ‘The Night Chancers”. Standout track “Slumlord” continues where tracks like “Miami” left off, in some weird lucid-dream world of sordid encounters and seedy back-alley neon. Sounding both dangerous and sultry in the same breath, Mr. Dury is on fine form as he leans more into personal narrative, whilst maintaining his characteristic tongue-in-cheek wit.

Not only a pivotal moment in the build up to second album ‘Drunk Tank Pink’ but a late contender for track of the year. Progression, growing up, whatever you want to call it, ‘Snow Day’ is an insight into the direction of the band since the release of debut album ‘Songs of Praise’. Frenetic energy meets measured self assessment in the South London bands finest release to date. – Sam Ford

Sun-kissed fun-soaked psychedelic-disco pop, Pet Grotesque delivered an underrated summer banger ballad with ‘Scratch’, akin to the likes of Ariel Pink, Tame Impala and Unknown Mortal Orchestra. One for the late nights, ‘Scratch’ is perfect for smashing tinnies and boxes of wine at beach parties from late night to the crack of dawn as the sun emerges. – Brad Sked

Glasgow is truly having its moment of late and Glam titans Walt Disco, are the ‘Young, Hard and Handsome’ equivalent of always having a porcelain bowl of Liquorice Allsorts in the centre of your dining-room table; you never know when controversial confection might save the day, and fazeless rule bending is always a tasteful alternative. – Al Mills

We’ve gone on about NewDad quite a lot on the site and it’s not easy to choose one track for this list. ‘Blue’ was the track that suckered us in, so it feels the right choice. The Galway four piece bring a new sound from Ireland, leaning more towards the lo-fi dream world of Warpaint than the abrasive backdrop of Girlband which has inspired many of their contemporaries.. With ‘Blue’ Newdad have brought alternative pop forward a level and it feels like this is just the start. – Sam Ford

This track, like the band themselves, seems to have slipped under the radar slightly, and is all the more impressive for it. Their only release of the year, and set against a backdrop of general behind the scenes turmoil, “Moustache Mike” is a mesh of abandoned-fairground synth and gritty, brooding vocals, holding a warped mirror up to the decaying beauty of the American Dream. Completely themselves and uncompromisingly eerie, this was a timely reminder of what an important band Phobophobes are. – Dan Pare

We’ve created a So Young Tracks Of The Year playlist featuring everything above. Find it on Spotify here.