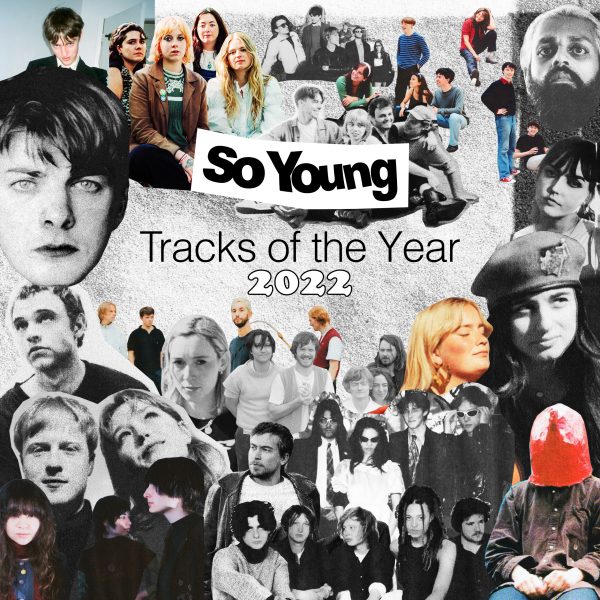 As a publication that’s always hungry for what’s to come, it’s not often we look back and reflect. 2022 may well be viewed as a truly positive return to ‘normality’, whereas for some, 2022 has seen that normality become a lot harder. The one constant we have been fortunate to rely upon, in bright days and in dark, is good music. This year has seen the release of some excellent albums, the breakout of some exciting brand new artists and the return of some old favourites. Within those moments are some of our favourite songs of the year – ones we think we’ll take with us into 2023 and beyond.

As always, we finish the year by asking our community or writers and contributors to tell us which tracks have stood out to them. In no particular order, here are the So Young Tracks of the Year 2022.

C Turtle – This Is Not Karate

A cow goes moo. Naturally. A bunch of chords circulate in brittle definition. Some just-about audible PSAs drift in and out of earshot. There’s a cymbal flourish, another, and in two minutes it’s already gone…But somehow, in this meagre time, with these humble components, C Turtle conjure an implausible magic with ‘This is not Karate’. Too precious for this world, too delicate for our time, the music falls apart in our hands, like a priceless, ancient artefact that crumbles upon exposure to air. Outside of fashion or trend,  C Turtle are totally inspirational. “Fuck your dreams. This is Heaven” – Elvis Thirlwell

C Turtle gave us half an hour or so for a chat in So Young Issue Thirty-Nine. Read it here.

‘Runner’ builds a bridge between folk and punk, a path rarely, if ever, trodden before. In this track, the way Alex suddenly screams, ‘I have done a couple bad things’, suggests his actions have amounted to something slightly worse than leaving the tea bag in for too long… Who exactly is Alex G, and what can we hope to uncover about his ambiguous past in the future. – Leo Lawton

We chat to Alex G for the first time in Issue Thirty-Nine. Check out the interview here.

Cut from Jacob Slater n co’s awe-inspiring debut album, ‘Purple’ is a cascading cacophony of pent-up, art-rock expression. A vivid blend of swelling guitars and earnest lyrics, Slater’s rasping vocals envelope the soundscape like a familiar warm blanket. A master of emphatic expression, heartfelt undertones elevate the single’s headstrong delivery. Jaw dropping from the offset, the ‘Cub’ LP has too many highlights to choose from – with this sentiment in mind, queue ‘Leader of the Pack’, ‘Mantis’ and ‘Epilogue’ as inspired accompaniments to your winter hibernation. – Laura Pegler

Wunderhorse are on the cover of So Young Issue Forty. Grab a copy here.

On ‘Greatest Hits’, Jockstrap speed-run levels of love and lust soundtracked by their own orchestral chiptune. Like Wuhu Island inhabited by Gucci model Miis, the track’s bit-crushed sequencers and gleaming strings are an unlikely but pleasing combination. As the midi bass tackles fiddly chord changes, Georgia Ellery promises to ‘See you on the other side’, yet you’re left feeling that there’s no way to move on from Jockstrap’s harmonious heaviness. – Charlie Brown

Read our interview with Jockstrap in So Young Issue Thirty-Six here.

The latest post-punk darling to come from Speedy Wunderground’s delectable roster, this single saw newcomer Heartworms solidify her place as the devilish temptress of South London. Drenched in macabre and poetic in delivery, the track is as much haunting as it is sumptuous in consumption. Served with a side of wartime visuals and a lit fag in hand, Heartworms is the full monochromatic package set to entrance the darker side of the alt-rock scene. – Laura Pegler

Prior to the release of this debut single, we had a chat with Heartworms about what was to come. It’s inside Issue Thirty-Eight here.

Lime Garden have been slowly simmering away like a fine chilli for the last couple of years, becoming a comforting favourite we always keep coming back to. This year they treated us to the mouthwatering release of ‘Bitter’. Crack open a bottle of something high in tannin for a perfect pairing of the darker side of human emotion. As each bite seems to unlock brand new flavours, try to make sense of the fireworks going off inside your mouth by tasting each ingredient as it was truly intended. Yum. – Will Macnab

Lime Garden are on the cover of So Young Issue Forty-One. Find it here.

Fontaines D.C. – Jackie Down The Line

On a very rare occasion, musicians wrap songs around their fists, and with all their might wring out such emotion from only two chords. It’s happened before on John Martyn’s ‘Over The Hill’, and more recently on Robin Thicke’s unprecedentedly cloying ‘Blurred Lines’, but this year Fontaines DC nailed it with ‘Jackie Down The Line’. They veneer sturdy guitars with ‘sha-la-la’s and make threats sound like a love song, they’re the Irishmen we all wish to be, and they know exactly what they’re doing. – Charlie Brown

The day this song came out was almost certainly the highlight of my year. It’s glorious, and Sam’s vocals are natural perfection; effortlessly producing some of the most euphoric-melancholy my ears have ever felt. I’m absolutely, full-throttle, addicted. – Al Mills

Read our interview with Gently Tender in So Young Issue Thirty-Seven here.

‘Bobby works on weekends, and he’s got a good hand, but he never keeps his promises, and I’m getting pretty tired of staying up.’ We’re hooked immediately. Who’s Bobby, what has he done, what’s going to happen? This song tells the fantastic tale of a negligent man who ultimately reaches his demise (no spoilers). ‘Checking Out’ is exemplary of Divorce’s lyricism, which often follows poetic trains of thought, expressed with an underlying anger and urgency. 2023 is going to be an exciting year for Divorce and we are very excited to see whose story they tell next. – Poppy Richler

Read out interview with Divorce in So Young Issue Thirty-Eight here.

Sorry – There’s So Many People That Want To Be Loved

Having been shamed by Spotify for 65 plays of this track since its springtime release, North London quintet Sorry effortlessly clinched the top spot of this year’s listening list. Whether in love, out of love or no idea what the heck to feel about love, the track comically captures the sheer hot mess of it all. Seen through the lens of vocalist Asha Lorenz’s pained musings, the glitch-cum-jangle pop melody will sink its teeth in from the get-go. Slick and strutting from start to finish, this single is an essential ear-worm for the disillusioned romantics of this world. – Laura Pegler

Sorry are on the cover of So Young Issue Thirty-Nine. Grab your copy here.

One of those songs that stops you in your tracks. ‘Kids 1995’ manages to cling tight to the directness that makes a great single, great, whilst simultaneously journeying from gentle reflection to passionate, heated proclamation. Whilst for New York’s Been Stellar, this song is a bit of an oldie and represents a previous time for the band, its timing feels undeniably perfect. Stroking our undying need for familiarity, with fresh faced, anthemic songwriting. If one band signifies the potential growth of indie guitar music right now, it’s Been Stellar and ‘Kids 1995’ purely acts as proof of that. – Sam Ford

We chat to Been Stellar in So Young Issue Thirty-Nine. Check it out here.

Needs to be 3x longer because I’ve been listening on loop. Hire me to dj your parties and expect this played twice, minimum. – Kalisha Quinlan

On Katy J Pearson’s sophomore album ‘Sound Of The Morning’, many of the songs are remarkable for their ability to channel and recreate nature through music. From the sunrise in ‘Sound Of The Morning’ to the sunset on ‘Storm To Pass,’ there’s a subtle build that runs through the album, carrying the listener on a series of ups and downs. ‘Storm To Pass’ sees KJP asking the listener to ‘remember’ repeatedly. Set to a backing of angelic harmonies, elongated instrumentals and contemplative phrasing, this song presents a space to reminisce and find a peace of mind. – Poppy Richler

Black Country, New Road – The Place Where He Inserted The Blade

Looking back at the massive shifts that have occurred for Black Country, New Road, since the release of ‘Ants From Up There’ earlier this year, it feels like in many ways the album was a goodbye to a period already behind us. Yet it is a masterful display of vulnerability, anxiety and grief. Its power is embodied in the astoundingly beautiful ‘The Place Where He Inserted The Blade’, an achingly sad yet tender track that captures many of the key themes of the album and leaves you reeling with emotion. – Eve Boothroyd

Horsegirl – World of Pots and Pans

Nothing if not ambitious, Chicagoan youngsters Horsegirl are fluent in stellar songwriting, and have the knowledge of the instruments to back it up on ‘World Of Pots and Pans’. Marrying elongated shoegaze guitar sentences with carefree, lovelorn lyrics “Sometimes I’m thinking that I lust you / But I know it’s only love”, they exhibit a maturity far beyond their age, and produce dutifully empowering music for both musician and listener. – Ali Grice

Read our interview with Horsegirl in So Young Issue Thirty-Eight here.

Thankfully, 2022 brought with it new Crack Cloud. Their September album ‘Tough Baby’ was inaugurated by its earnest leading single, ‘please yourself’. Underpinned by Zach Choy’s thrown vocal and sporadically lightened into sentimentality by piano interludes, ’please yourself’ is constantly building itself up just to break itself back down again in a satisfying synergy. It’s safe to say that after releases like this, their return was welcomed with open arms. – Amber Lashley

We caught up with Crack Cloud in So Young Issue Thirty-Nine. Grab a copy here.

Tapir! – On a Grassy Knoll (We’ll Bow Together)

Like the fragrance of flowers or a seashore’s saline breeze, Tapir!’s every musical moment is an  affirmation of life and a rooting back to the self. Enshrouded in folklore, yet grounded by a will towards well-spun songwriting bliss, their hymnic, rollicking “On a Grassy Knoll (We’ll Bow Together)” was a gilded high-point of their debut EP ‘Act 1 (The Pilgrim)’. Throughout, twitching drum machines and twiddling guitars underlie soaring vocal melodies so meekly defiant, so daintily high-flying that they stretch up to peck the sky on its cheeks, only for the sky to blush back in diffidence. – Elvis Thirlwell

A chat with Tapir! is inside our brand new issue. Read it inside So Young Issue Forty-One here.

Just Mustard are on the cover of So Young Issue Thirty-Eight. Grab a copy here.

Glasgow’s Humour burst onto the scene from relative obscurity. Upon the release of debut single, ‘yeah, mud!’, Humour had barely a handful of shows to their name and social profiles were post-less/didn’t exist.  Early days aside, self-recorded ‘yeah, mud!’ was a mature opening statement. A platform for much heavier sounds to come, frontman Andreas’ frantic yet unique vocal style sits upon driving drums and neat guitar flourishes. Somewhere in ‘yeah, mud!’ you’ll hear your favourite bands of old, but Humour are breathing life into a genre of shouty/talky bands which has become somewhat tired. That’s probably their biggest achievement to date. – Sam Ford

Humour chat to us inside So Young Issue Forty-One. Find a copy here.

Who better to commentate on the bleak meaningless of modern life than London’s very own DEADLETTER? Zac Lawrence’s candid, low register delivery is as much honest allegory as it is projecting the symptoms of a wider problem, and there is nothing more enjoyable than the holler of ‘life’s a binge’ at the end of each sordid chorus. As a unit, the band contribute to swelling choruses and deliver staccato horn stabs that form a deeply bittersweet anthem. – Ali Grice

We interview DEADLETTER in So Young Issue Forty-One. Read it here.