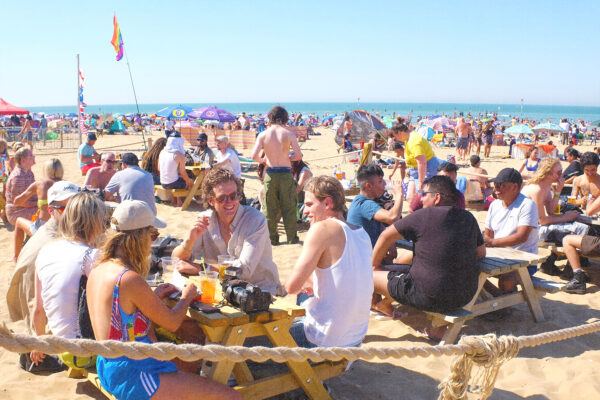 It’s 10am on what’s set to be one of the hottest days of the summer. Gradually, everyone begins to arrive at Liverpool Street Wetherspoons for the beloved annual pilgrimage. It feels pretty early to start drinking and my request for a shandy gets ignored at the bar. No cocktails here. But as I sip my pint of straight lager like Hunter S. Thomson, a smile grows across my face, for the buzzing excitement amongst fans and bands alike and the promise of a fantastic day looms. Hold onto your hats.

We shuffle out of the pub in a cloud of elf-bar fog, slightly behind schedule, but eager as anything.
As always, the sensation that you’re on a school trip kicks in, except no one really knows who’s in charge. Photographer and long-serving friend of the band, Jamie MacMillan is the nominated responsible adult, though I did just witness him downing a whole pint in about 15 seconds.

Gone is the rickety, old, cigarette-smoke-filled, double-decker school bus, replaced today by a sleek air-conditioned coach. Luckily though, some of the fans are willingly ready to urinate in bottles and cups to stop things getting too high brow. For reasons unknown, the one toilet on the bus full of half-cut teenagers is locked.

Sunlight splashes off *whatever coaches have instead of bonnets* as we tear down the M2. We stop briefly to load up on Greggs pasties and multipack cans of M&S Gin & Tonic then jump back on board. As far as I know, no one is left behind.

It truly is a glorious day and as Dreamland’s ferris wheel waves us into Margate, it becomes clear that basically the whole country also reckoned it was a good day to head to the seaside. It’s Margate Pride too. and the beach pulses with colour and music. 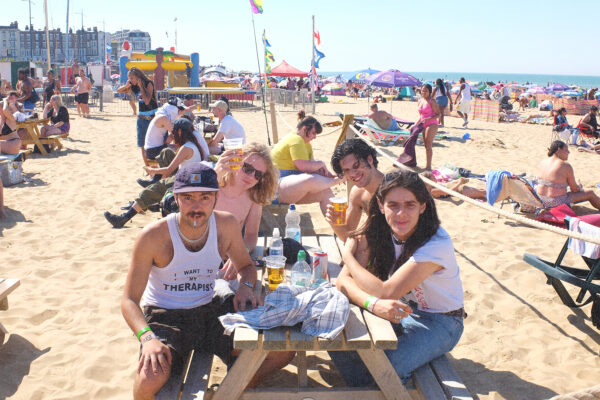 For the next few hours the trusty beach shack keeps everyone steadily supplied with booze and chips. There is a man called Simon with a very good Spotify playlist. Al is first out with the football whilst Henry and Rice take a dip in the sea. The sand is almost too hot to stand on. Oli demonstrates a complete lack of skill when applying mustard to his hotdog. The Island of Love boys sip Pimms and discuss forming a Gullcore band that squark and only play coastal shows. Everything is golden.

For the fans, an opportunity to hang out with their favourite band(s) like this is unparalleled. With Sports Team now frequently playing festival main-stages to thousands and on the brink of releasing album 2, its very heartwarming to see them still fraternising so wholesomely with their community.

Kickstarting the music down the road at Elsewhere is the beret-wearing Heartworms. Sun-kissed fans trickle in to catch a promising and poetic set filled with theremin solos, thumping synths and spacey guitars. 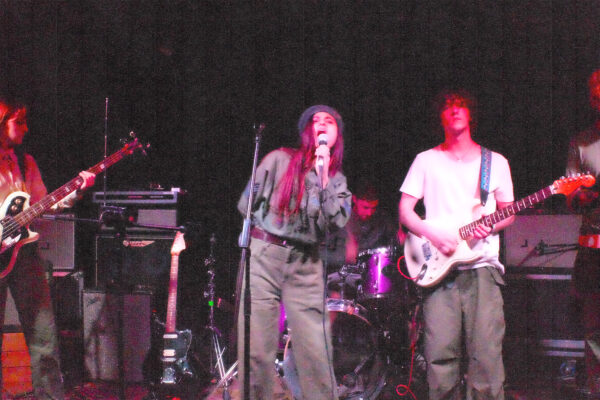 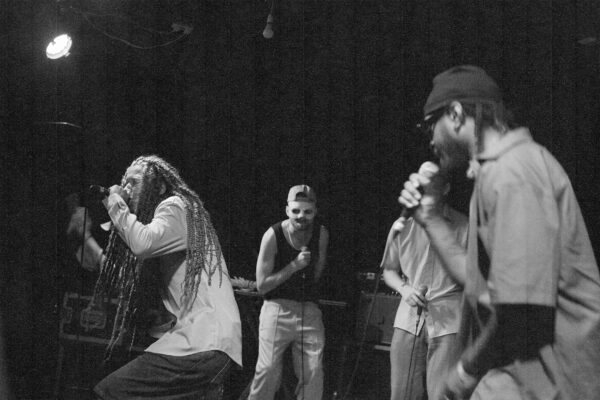 Next up, NiNE8 Collective explode onto the stage with a turbulent and gripping performance. Clad in a combination of face masks and Sports Team’s hand printed Margate merch, they jump on and off the stage riling up the crowd and powering thunderously through their set. It’s easy to see why there’s such a big buzz around them at the moment. Lots of beer is spilt, lots of new fans are made.

Like most people at this point I head out of the venue round the corner to Palms Pizzeria (owned by Sports Teams manager Stu) for arguably some of the nicest pizza to ever have graced my mouth. The Pickleback (Whiskey & Pickle Brine) however didn’t go down quite so easy.

I’m pretty drunk by now but manage to assist Island of Love in writing out their setlist on bits of scrap paper just moments before their set. As they subsequently erupt into duelling guitar solos, thrashing hair and ‘Sha-la-la-la-la-las’, the islanders make its clear why their one of London’s most exciting up-and-coming bands. The fuzz-filled ‘Tall Boots’ is a particular highlight.

I always make notes on my phones during shows I’m writing a review for, and in my inebriated state managed to write ‘A band you legAlly shouldn’t miss’… I don’t think I’d have much luck getting the bill passed at the House of Commons but it is a sentiment I still agree with sober.

Following on in the same fuzzy footsteps, next up are TRAAMS, hot off the back of the release of their new LP ‘personal best’. A hugely anticipated set, not least by hosts Sports Team who are seen thoroughly enjoying the show throughout. They don’t disappoint, and it’s easy to get lost in their propulsive, almost hypnotic breakdowns. They’re super tight and with the addition of a few extra live members on stage they sound full and thumping. It truly is a joy to see bands like this in such an intimate setting.

Between the next two bands, some unsung hero decides to play The Wytches’ 2014 album ‘Annabel Dream Reader’ over the speakers almost in its entirety. On the wall of the toilet someone has written ‘EVEN BABIES LIE’. A stranger buys me a beer completely unprovoked. A man eats an egg and cress sandwich in the corner. Flashes… vignettes of a night my headache remembers more than my head itself does.

By this point a sensible man might have switched to an alcohol free beverage… a Tizer or perhaps a Capri Sun, but not this fearless reporter. The room is packed out for Sports Team and beads of sweat drip down from the ceiling. This is it, the moment we’ve all been waiting for. The big door prize. 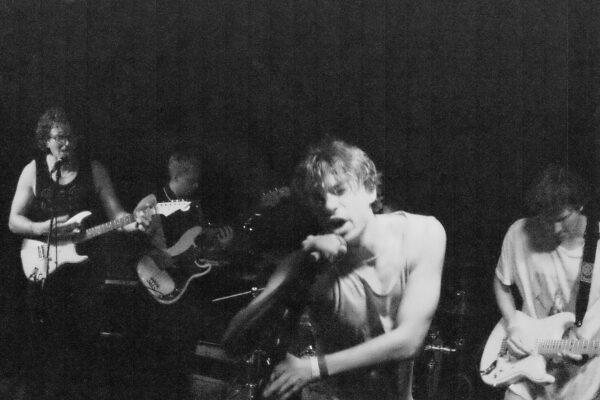 In an unforeseen move they shock fans by opening with song ‘Margate’. It’s 0 to 100 from the start and never seems to come down. Even when stood right in front of the speaker it’s hard to fully hear the band over the inebriated chorus of ST’s biggest fans slurring every single lyric perfectly. It’s a biblical performance with new songs sitting comfortably alongside the hits. ‘Long Hot Summer’ is an apt song choice for the day and sees Rice take guitar duties whilst Rob sings his heart out. The crowd sways and swells. There is an ongoing mosh pit that doesn’t even seem to pause between songs. During ‘Fishing’ a large group of the crowd sits down and pretends to row. 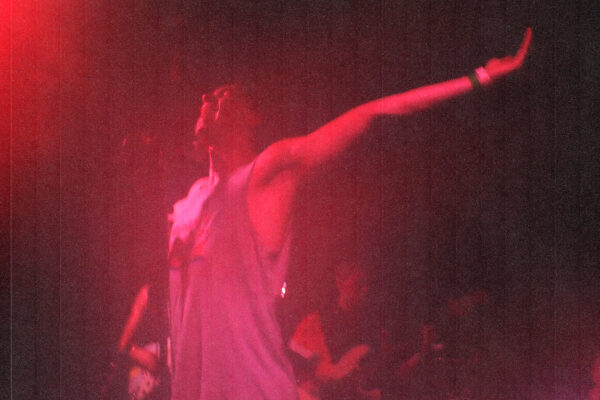 They work the crowd like soft pizza dough in their hands. Camel Crew feels ceremonial. Emotions run high. Fans weep when Ben Mack very slightly smiles. They close with crowd favourite ‘Stanton’ complete with harmonica solo to boot. Pause for a round of applause.

Sports Team are more than capable of playing headline sets to thousands in fields and tents but they never seem more at home than on this small stage here in Margate.

For anyone smart enough to take the bus back to London at circa 11pm, the night ends here. Who could say what antics went down on that drive home. Legend has it that they had to make 17 toilet stops.

A bonus treat at the end of the night, a post-credits scene, are the vivacious ‘PPJ’ (Pàula, Povoa & Jerge). They are an injection of adrenaline into the heart of the night, somehow managing turn the tired dregs into a dancefloor pumping with spirit. Pàula’s infectious boogying coupled with the angular beats, synths and guitars give a second wind to the evening. 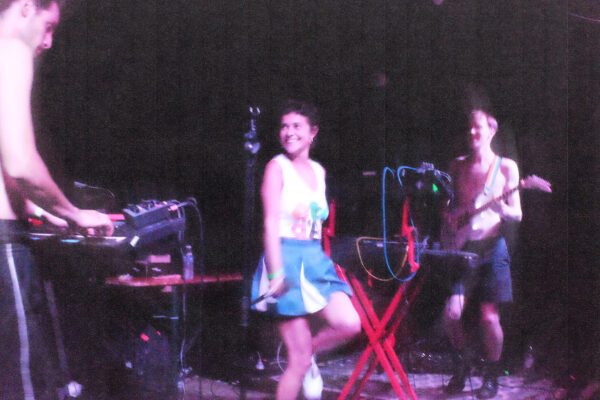 The beers keep flowing as the night swirls on. It’s around midnight and Island of Love ask me what time the bus is leaving. I tell them it left an hour ago. ‘Is there is a second bus?’ is their follow-up question. Alas. There is no second bus.

And so we must stay here, in Margate, forever and ever. Or at least until next year, when we can do it all over again and try to remember to get the bus back to London this time.

All words and photos by Cameron JL West.