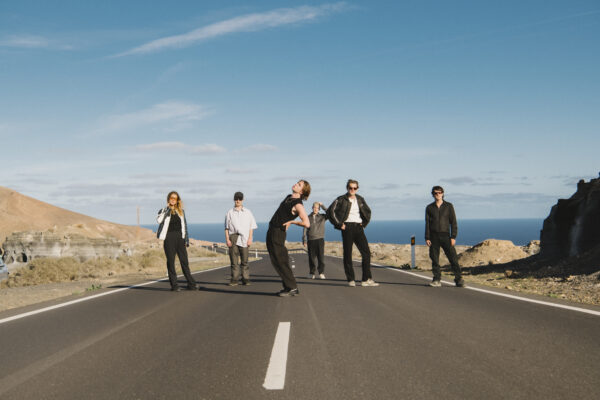 The Mercury Prize-nominated ‘Sports Team’ have announced the details of their follow-up album to 2020’s ‘Deep Down Happy’ titled ‘Gulp!’. Due out July 22nd via Island Records, London’s most jaunty band present its first single, the bounding ‘R Entertainment’.

Tied to themes of doom-scrolling and perpetual, unforgiving news cycles, ‘R Entertainment’ is released at a particularly poignant crossroads in history — where a pandemic seemingly ends, the rumble of war brews on the horizon, all of it documented in handheld HD.

Playing Devil’s advocate, Sports Team blitz through a flurry of tumble-dryer guitars and dizzying hooks delivered by screwball frontman Alex Rice, pontificating he’ll “be fine with just a little entertainment”. Packing the usual zeal of a Sports Team anthem into a punctual just-over three-minute track, it is clear that the DNA of Sports Team has not changed, but their phenotype has. Instead of musing about idle suburbia and the idiosyncrasies of passing characters in their lives, they are now more nuanced cultural observers, recognising that in an increasingly tech-driven world, we are being subtly desensitised to everyday horrors — seemingly brainwashed by excess.

They describe the track as “The packaging down of all human experience into entertainment, prompted by the infinite scroll through social feeds and the manic formlessness of the images we are hit with every day. Graphic news interrupted by ads for season 17 of The Bodyguard, news as a rubbernecking, passively waiting for the next drop of horror as we flick through recipes.”

Although still mischievous and by-all-means fun, this single exhibits an odd maturity for this band, one which we have previously seen a window to in their 2021 single Happy (God’s Own Country), but in this evolution, their intentions are far more crystallised.