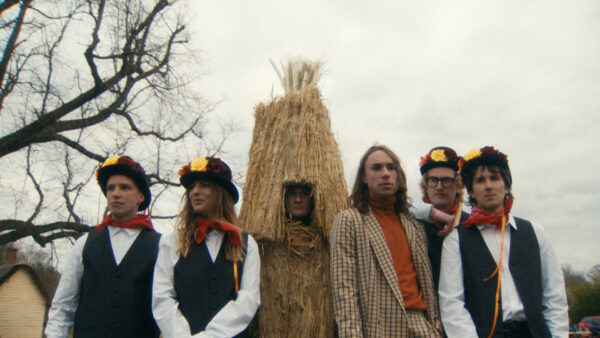 With Lady Gaga, The Mercury Prize and onstage papier-mâché sharks ticked off the list, we can all but wonder what outlandish venture the indie rockers of Sports Team will decide to take on next. Inherently unpredictable and always with a jovial spring in step, their latest music video ‘Happy (God’s Own Country)’ is a spooftastic nod to the 1973 horror flick ‘The Wicker Man’ and with a cynical portrayal of modern Britain in tow.

Packing more punch than Tyson Fury after one too many, agitated guitars and thumping percussion set the darkly comic scene. Holding economists, neo-fascists and everything in between to account, a charging melody makes foot-stomping light of the track’s sardonic lyrics. Rallying up a gaggle of country bumpkins in some non-disclosed Middle English village, the band get stuck into Morris dancing, accordion sing-alongs and sacrificing keyboardist Ben Mack on the bonfire, before a neat 3 minutes is up.

Commenting on the single the band explain: “We recorded this at the end of last year at a time when it was hard not to feel exhausted by the scale of insincerity everywhere. It’s a sort of Cold War Steve collage, a cut and paste diorama of cronyism, cottagecore and window-dressed Toryism, with the frustrated energy of live performance without a stage.”

It would seem it’s never a dull day in the life and times of the Cambridge six-piece. Staying true to this ethos, ‘Happy (God’s Own Country)’ is a left-field exploit that’ll have you gripped from start to finish.