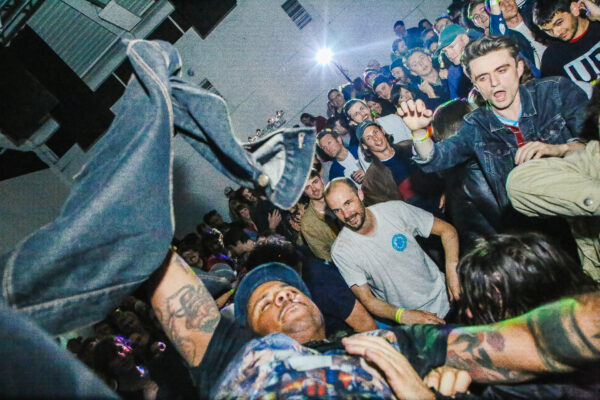 Test Pressing Festival is an inter-venue all-dayer with a pleasing twist. Rather than just taking place outside of the day to day hustle and bustle of the capital, the festival embraces it’s surroundings and draws an intriguing experience.

Nestled within the bare industrial settlements and beaten residential areas of Hackney Wick – the overground train from Stratford whips by you as CC Honeymoon does the same to a crowd in Grow, or you can sink a pint as a narrow boat trundles along the water next to a growing crowd of punters outside – a mass cheer erupting as its captain blows a trumpet. It’s an enlightening setting, one that adds to event’s character. Even without the personality of its environment, Test Pressing’s broad and on the button curation does more than enough to be a unique prospect in a saturated market.

Wives seem to lose some of the nuance that subtly simmers away in their recordings, replaced by a guttural thickness that feels emotionally empty. Without Jay Beach’s lyricism at the forefront of focus, their spacious noise feels undercooked. While the same can’t be said for the erratic and sensuous pop duo Pristine Babe, who completely own Grow with their animated and zealous stage performance. Their amorous stage theatrics only enhance the energy that comes from their addictive synth-pop.

Martha Skye Murphy plays alone in the early evening, presenting her alluring, gothic ballads in a skeletal and foreboding light. The strength of her voice alone does enough to thankfully overshadow the distracted chatting in the crowd. Tiña pull the first large crowd of the day, punters squeezing into Grow’s cafe area to catch a glimpse of the Speedy Wunderground-affiliated group. They are rewarded, the group providing a bright and laconic set to match the slowly drawing evening that’s subtly arriving.

Black Country New Road are patient and stoic as they casually build into a thrilling half an hour of intensity. Each instrument basks in its singularity, a sharp, brazen atmosphere ensuring the crowd watch on with purposeful silence. Isaac becomes more and more enraptured within the set, rolling his eyes into the back of his head as he shouts another witty quip. It’s all too short a set for this very exciting group.

Much like Pristine Babe earlier, CC Honeymoon bounds about the small stage afforded to him, climbing the speakers and reaching out to the crowd as he bears all in emotionally cathartic industrial pop. PVA are a real chameleonic proposition, creating thick uncompromising noise one moment and infectious, auto-tuned 2000s pop the next – it enthrals the large crowd in attendance.

Surfbort don’t hang about for anyone, blitzing through their untarnished punk rock with power. Dani Miller spends the entire set with a mischievous smile on her face as the crowd surge towards her, battling joyously at the front as crowd-surfers descend upon them. It’s pandemonium, and utterly brilliant.

The white walls of studio 9294 are suddenly plunged into darkness, all but for the arrival of a glitching silver humanoid announcing the entrance of Scalping. Tonight they pulverise the crowd in attendance, the industrial bass thudding against the brickwork as their squalling yet infectious sound courses around the venue.

1am arrives and the festival is no where near finished, as Warmduscher top off the day with a whirling mess of rock n roll that entrances it’s now largely inebriated crowd as bodies fly everywhere, band and crowd in unison. So into the night we go, buoyed by a festival with alluring personality and exciting prospects.