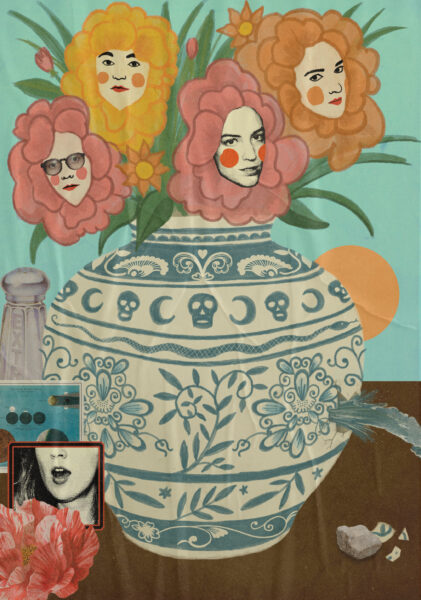 The Big Moon have just released their third album, ‘Here Is Everything’. In the buildup to the release, we caught up with Jules and Celia to get an insight into how this record was made and how motherhood informed the music. The interview below is from Issue Thirty-Nine of So Young.

From the get-go, indie-pop heroines The Big Moon have been hailed for their insatiable knack to spark up a feel-good frenzy. In similar remits to eating a jam doughnut without licking your lips, you’ll be unwittingly humming the chorus to a TBM track before the song is out. So just how do they do it?

Enviable musicianship aside, what first struck me about Jules (singer, guitarist) and Celia (bassist) was their warmth, openness and the ability to finish each other’s sentences. Perhaps their success doesn’t solely hinge on the music, but the act of being a well-oiled family unit. Sprinkling their bright-eyed melodies with lashings of sentimentality, album three looks set to be all-the-more heartfelt than the last.

We caught up with the band to discuss motherhood, crazy, stupid love and finding a guardian angel in Courtney Love.

Now then, do I sense some sore heads after a heavy festival weekend?

Jules: I literally got home half an hour ago, so I’m trying to readjust to the domestic setting that isn’t just a van.

Celia: I was just making a cup of tea to help the hangover – we’ve got our priorities right.

I’m matching you with a peppermint cuppa, rock stars all round. Firstly, I want to thank you for your words of comfort in my hour of need. I vividly remember walking down a canal after being dumped in floods of tears to, ‘It’s Easy Then’. Really hit the spot.

J: Aww, I’m so glad our songs are going to the right places!

C: It’s so nice, and a bit surreal to hear when someone says they’ve listened to one of our tracks and it made them feel better. That’s great!

Also, I hear congratulations are in order Jules on your new baby boy!

J: Thank you! I’m completely obsessed with him. I could talk about him for ages, so please do continue on this topic.

Happy to oblige. With your next album ‘Here Is Everything’ being centred around your pregnancy, how has motherhood played an impact on your ability to – for want of a better phrase – be in a band? I expect they don’t always go hand in hand.

J: It’s a complicated place. I think anyone who has a very small child will know that your life becomes a logistical nightmare. So many of the conversations that I have with my partner are about who has the baby when, ‘have you got enough food for the baby’, ‘what’s in the bag for the baby’ and that’s essentially what being a parent is a lot of the time.

In terms of working it all out with the band, I have the best band mates in the world! They’re all his godmothers and the best babysitters. We’ve had so many days in the studio when he comes in and we just pass him around, so it’s been surprisingly ok.

Has he developed his own music taste yet?

C: He’s super musical! He loves making his own strange noises. We had him with us when we were doing the final tweaks on the songs. Jules would sit him on her lap and we’d wait for him to nod or dance when he liked a track. When he did it was a ‘phew, we’ve got the baby’s seal of approval’ kind of moment!

Going back to your main point about how mothers and musicians can co-exist as one person, that’s why we really wanted the album cover to be what it is (Jules late into pregnancy). I think that it’s important for young families to look at us and think ‘it can be done, I can do it too’. 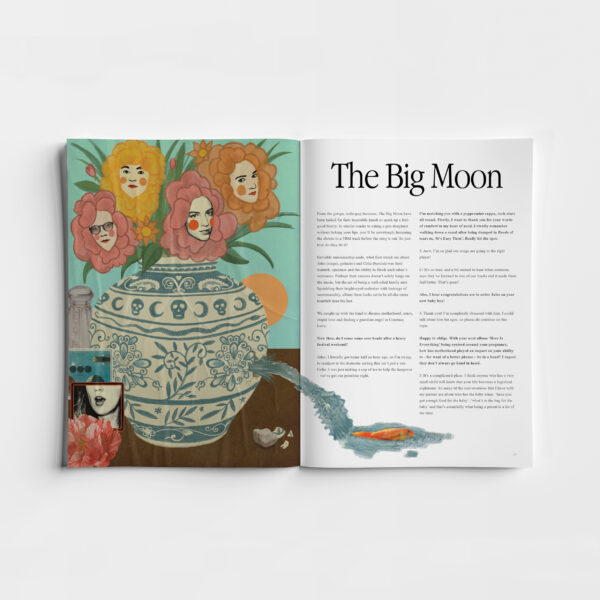 The Big Moon inside Issue Thirty-Nine

The sisterly camaraderie between you guys is undeniable (cue the ‘Wide Eyes’ music video and a secret handshake to give ‘The Parent Trap’ a run for its money). Would you say that the new material acknowledges this? What other areas do you unpack?

J: So much has happened in the last couple of years for everyone both personally and collectively. I started writing it when lockdown began. My main thought at the time was ‘what the fuck am I going to do now’, so there’s a bunch of songs that are more introspective. There are some about the end of lockdown and the freedom of being together again. Then I got pregnant, so there’s loadsss of songs about how that feels and the whole anticipation of what it’s going to be like. Six months after I had my son, I wrote four more songs. Half the album is more expectant pre-parenthood and the half post-birth deals with the realities of it. I’m glad that I went back and wrote some more after the baby was born. It kind of completed the circle of “okay, this is my life now”.

The new single ‘Wide Eyes’ could be misconstrued as a love song – in a way it is – but is it an ode to your baby boy?

J: It definitely is a massive, giant, love song! It’s a snapshot of the extreme hormonal crash you have after birth. All your hair falls out, your skin goes flakey and you just feel mad for a while, but it’s some mystical, biological process of making you fall in love with your child. You have to go a bit crazy so that you can fall in love. The track is a pure, joyful, blissed out, hormonal outcry of “I LOVE MY BABY”.

Exactly – whether they’re a baby, a boy, a puppy (currently the love of my life), love really does make you crazy.

J: It does! The moods of the songs are definitely universal. Music is just a feeling. It’s all about how you react to it with a physical sensation, so we’re just trying to conjure up that magic trick.

Spot on! Is this why you decided to ditch the studio in favour of your drummer’s spare room – to reconnect with the playful basics?

J: Yeah! We basically took all the songs and opened them up at Fern’s house. We were hitting baking trays and making the sounds of cymbals with our mouths. It felt really good to be in control like that.

C: Especially after the pandemic. It happened at a shit time for us because it was right at the beginning of our second album cycle. We went up, up, up… and crashed right back down again. It was great to come back together and really pull each other through that time. I’d hate to be a solo artist. We’re like an organism – ‘ok the right arm’s not functioning, so let’s take some more weight over here’.

J: We talk about that time like we were renewing our vows. The pandemic pulled everyone apart and we all found our way back to each other.

C: Now we’re more in love than ever!

Can you pass me a tissue, I’m feeling all warm and fuzzy inside! Jules, we’ve heard along the grapevine that you taught punk-rock legend Courtney Love to play the guitar. How the heck did this come about?

J: During lockdown, I was offering guitar lessons and posted on our Instagram account to send us a message if you wanted one… and I got a message from Courtney Love! I obviously didn’t actually give her guitar lessons, because she’s the queen of rock and one of the reasons that I play the guitar at all. She essentially said, ‘I haven’t played in ages. You look cool. Want to play together?’, so I was like, “OKKK?!?!”

Wow, was she a Big Moon fan girl already then?

J: I guess so, she’s on our Insta at least. We ended up doing these long, late night zoom sessions where we’d play Bob Dylan songs together. I ended up going round to her house and we were thinking of starting a band. We played loads of cover songs and recorded them. This was all whilst I was pregnant, so we spoke a lot about motherhood.

Did she feel somewhat like a guardian angel then?

J: Yeah, basically! She’s such a legend. I know you’re not meant to meet your heroes, but she was everything I wanted her to be.

I’m gunning for The Big Moon x Courtney Love collab! Finally, a question from the Magic 8 Ball – if you’d trust one member of TBM to save your life, who would it be and why?

J: Fern literally caught me when I was falling down a mountain once, so I think she’s already earned the title.