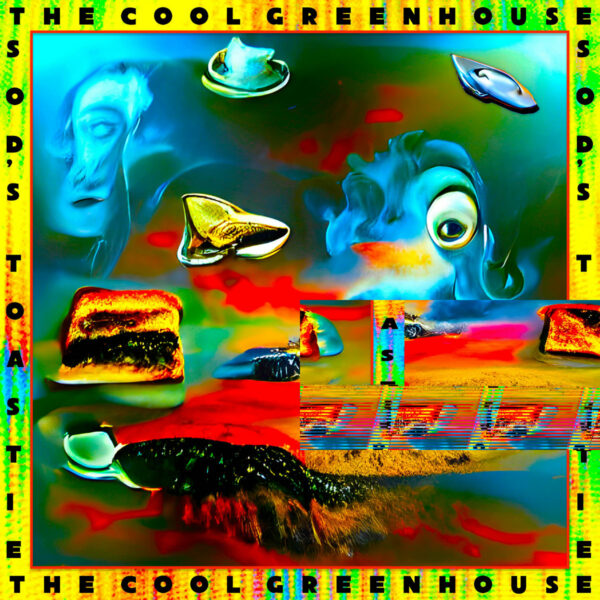 Ever attempted to send off some T-shirts, only for the iron’s cord to break, the printer to jam, all the pens run out and the Post Office close? Ever shouted ‘guitar solo’ before rocking out on an electric organ? Gifted vodka and a pack of ciggies to a truculent child to get them to join your band? Invited someone to watch 10 hours of slime asmr? Psychically channeled the words of extraterrestrials claiming to be an ‘alien velvet underground?’  None of the above? In the absurdo-bizzaro post-punk tribulation that is The Cool Greenhouse’s chaotic megaverse, these are the unlikely surrealities zinging down our gullets during the London 5-piece’s bulldozing second album, “Sod’s Toastie.”

As skewering 2-3 note riffs are repeated, reissued and recycled, and a normal looking bloke in spectacles sing-speaks strange stories, there’s yet a weird freshness to The Cool Greenhouse that seemingly belies these constituent parts. It must be because those disarmingly simple riffs are learnt by absolute rote, exacted with such tremendous synergy and momentum that they accrue added power and meaning with every return. It must be the lyrics too. Oh the lyrics! Relentless and insane, witty, satirical and captivating. Your attention is rapt, line after scissoring line. I challenge you not to be psychically flummoxed by Tom Greenhouse’s crisp one-liners and sideways non sequiturs; by those bonkers narratives suffuse with the most askew of sentiments and images, weaving the extraordinary into bitter Tory-trodden reality. They are some of the finest you will hear:

Come climb inside and watch 10 hours of slime ASMR with me.

In this musical climate which proliferates with post-punk treasures, we are privileged to witness these most honest and effective exponents of a much-cherished and oft-misbegotten style.

Musically speaking, The Cool Greenhouse takes significant leaps and bounds for album two. Following the stripped back productions of their debut, ‘Sod’s Toastie’ boasts some real forward-facing powerhouses. While there’s forays into more familiar territory – ‘Get Unjaded’ offers a Greenhouse masterclass in lean and propulsive post-punk – we have Opener ‘Musicians’, which may just rank as the group’s greatest achievement yet. Layering up proceedings from some scrambling, wiry notes, the tune expertly, and motions itself towards a Fela-Kuti-esque, bongo-fumbling extravaganza (!!!)

‘Hard Rock Potato’ meanwhile flings Matrix-glitching sawtooth waves around one thunderous, abrasion against the financial elite. Then there’s the unprovenanced B-Movie horror of ‘the Next Stage of Destiny’. Or closer ‘The Neoprene Ravine’  – the bastard hate-child of The Fall’s ‘And This Day’ and The Velvet Underground’s ‘ Sister Ray’-  which stuffs a demonic, ramalama of crepitating sludge into the fugged-out ears of the hard-hearted listenership.

As Mark E. Smith – whose influence is so apparent on ‘Sod’s Toastie ‘ – himself once helpfully advised, “life should be full of strangeness // like a rich painting”. And how The Cool Greenhouse’s musical life has been just so rich and strangely lived! Mission achieved. For now…