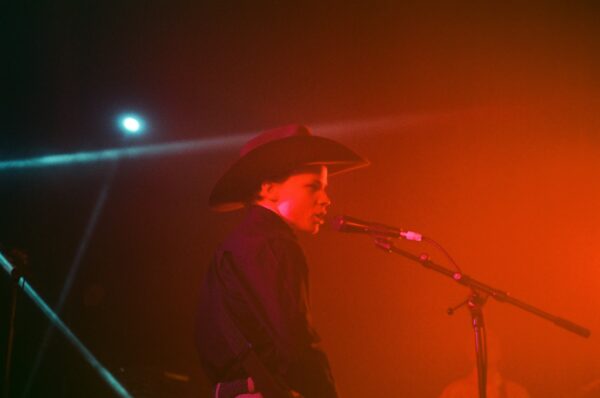 There’s not many festivals that offer such a high intensity schedule and unique opportunities to see your favourite acts quite like The Great Escape. Kudos to the people that run it, between all the conference running and industry hand shaking they’ve somehow got to fit a monstrous amount of acts onto a bill that could quite easily fill a week’s worth of time anywhere else. The Great Escape is a marathon, yet when done right it’s rewarding and full of landmark moments for some of the most exciting upcoming names.

Pip Blom are certainly one of those. They take the opportunity to present themselves with open arms, smashing through a surprisingly heavy and famously infectious set that bounces joyously. Working Men’s Club are absolutely no different, vibrant and enthusiastic in their approach while experimental and pulsating in their delivery – it’s an utterly invigorating start.

Just Mustard are elusive and utterly alluring. They stand fiercely alongside each other, crafting piercing, spacious noise that’s empowered by Katie Ball’s ghostly coos that fill the pub at the end of the pier. We find Katy J Pearson in a tiny photobooth shop, playing to a packed crowd that the shop owner is trying to keep on top of while handing out beers to the glowing faithful. It’s a lovely set, a collection of grounded and wholesome songs that really glisten live in a rich full-band setting.

Cam from Hotel Lux wishes me a hearty yet sceptical “good luck mate” as I tell him of my intentions to catch Viagra Boys at The Haunt. He’s got a point, it’s a bloody circus – queues of people flocking to catch one of the most exciting live bands around. I’m rewarded, peaking my head around the fire escape as the heavily tattooed Sebastian Murphy is riving around on the floor, screeching as the band of mid-thirties Swedish blokes let absolutely loose. It’s increasingly intense, palpable and riveting, the sprawling sound of sax and motoring guitar together is enough to send us off ready for a heavy night.

Sports Team shows are famous these days for being pretty uncontrollable, and while this is absolutely no exception, it truly feels like a moment. The crowd are insatiable from the off, screaming along as Alex Rice slaps his chest and gestures heroically to the crowd that he can do this all night. It’s elated chaos as ‘M5’ kicks in, Rice praying to Mac for any sign of emotion as a pit erupts right in front of them – our mate Tom Connick crowd surfing with a cast on, it’s brilliant. Yet through all the commotion, it’s the songs that are making this happen, ‘Ski Lift’ and ‘Kutcher’ brimming with all the exuberance and melodic joviality that is going to make them massive.

We’re rewarded for even being out of bed before midday on Saturday as Pottery treat us to Poutine and a rousing early set. They are one of the weekends highlights, an electricity running through their confident and zany performance that it’s a wonder how they are doing this as hungover as they are.

Confidence Man show no sign of the party being anywhere near over. They are a revelation, a euphoric combination of synchronised dancing and hilariously unsubtle wit backed by tight, crunching house. We’re not sure there’s anything this pair can’t do, they can dance, they rock light up underwear, they even handstand – it’s a joy.

From then on in it’s a Saturday at the beach, Hotel Lux airing hook-filled new material that’s bouncing yet still bites with acerbic scepticism, ‘The English Disease’ quickly becoming the song of the weekend. Talk Show are giddy after their set and it’s completely understandable why, they smash their set to the biggest crowd they’ve played to yet. Their dark simmering melodies pack an absolute punch, Harrison punching the air as the crowd down the front jump excitedly.

What Black Country New Road and black midi are achieving cannot be understated. They demand none of the attention that others strive their whole careers for, and yet they are receiving it with music that five years ago in a different climate would otherwise be deemed inaccessible and indulgent. Tonight they both prove why none of the attention matters, despite clearly being deserving of it.

BCNR’s sound becomes increasingly more impactful the more you see them, a real slow burning, nurtured proposition that can be emotionally tearing as much it may be sonically brash. Their ability as singular musicians is perhaps rightfully overshadowed by their unmentioned unison as a group, seamless, unquestionably sharp and underrated in its melodic fortitude.

Ive been open about my indecisiveness previously towards black midi, tonight I’m sold, permanently. They are a shot of intense anxiety and considered decisiveness, Geordie stalking around the stage in a trance as the group build expertly yet just as they want to. Whether basking in the treacherous and diabolical way ‘bmbmbm’ descends into cacophony or the entrancing way that ‘Speedway’ embodies its namesake, the crowd are hooked – duly showing just how much encompassing power the group possess.

So to the set of the weekend. For all that Fat White Family have done and put themselves through, it’s pretty gratifying to watch them truly shed everything and come into their own live, a gritty, frivolous mess that couldn’t be more engrossing when they are on top form. Lias, shaved of any hair on his head but a pony-tail, is down in the crowd from the off, unifying them as they sing ‘I Am Mark E. Smith’ and ‘Feet’ with aplomb. It’s like a bastardised greatest hits set, full of tempestuous brass and Lias’ shredded vocal chords, groaning violently and full of snarling deviousness.

Not quite done yet, it’s 3am and we’re at Richmond pub, everyone’s off their face. Hotel Lux trotter on-stage and deliver the final victory lap of what’s been a unstoppable and utterly fulfilling Great Escape Festival – there’s a small part of us that already can’t wait to do it all over again.

Header photo of black midi.
All photos shot on 35mm by Ross Jones.