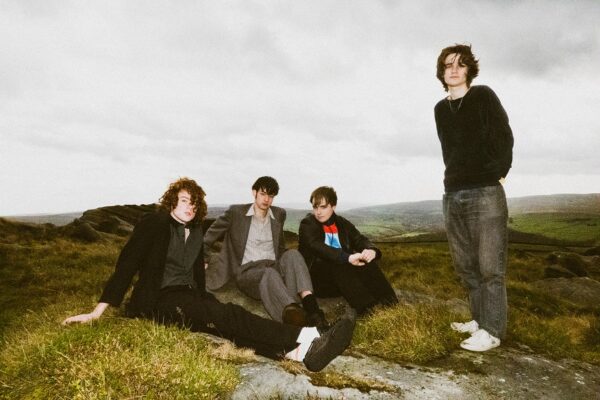 As this sad and sorry year draws nearer to a close, the mood of the nation is – let’s face it – at an all-time low. With beloved grassroots venues on the brink of closure and even the socially distanced gigs being rescheduled…and rescheduled…and rescheduled some more, is there anyone who could lift our sunken spirits? The answer is an ardent ‘yes’, in the form of Hebden Bridge four-piece The Lounge Society. Releasing their sophomore single ‘Burn The Heather’ via the illustrious Speedy Wunderground, the groove-ladened track promises to relight those dying fires – and with a devilish glint in the eye whilst doing so.

Leading the charge, a surefooted display of wonky percussion and fuzzy guitar sounds set to work at nonchalant pace. Entering the fold with ease, enigmatic vocalist Cameron Davey has all the beguile of a fresh-faced Nick Cave. As if firing the starting pistol with the fervent command of the song’s title, Davey sparks an increasing frenzy of snaking riffs & accented synths, racing in hot-blooded unison. Providing a moment of impassioned release, if you were all pent up at the beginning of the track then we expect you’ll be catching your breath by the end.

Restoring the balance of good vs. evil, the accompanying music video has all the makings of an anti-establishment, prisonbreak blockbuster. From tweed clad toffs on a hard day’s hunt to a high-octane shootout across the Yorkshire Dales and executed prisoners rising from the dead – director Nick Farrimond has managed to cram a whole lot of action into a humble four minutes.

A thrilling progression from their compelling ‘Generation Game’ debut, the northern lads seem all set to put post-punk thoroughly through its paces.