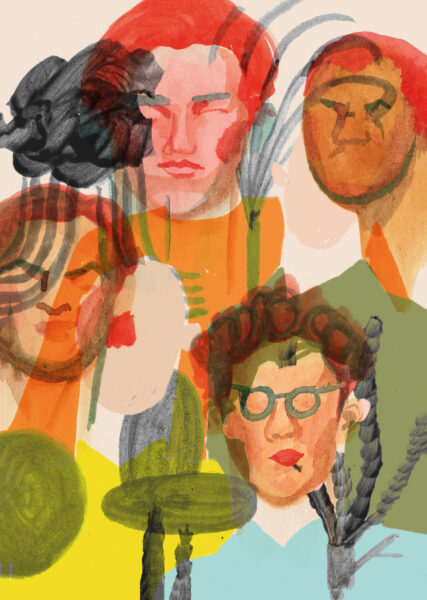 The Magic Gang have just released their second album ‘Death of the Party’. The below interview originally featured in Issue Twenty-Four (February 2020) of our print magazine and was an exciting introduction to what was to be their imminent (and now very delayed) second record. To celebrate the release, we’ve posted the whole interview for you to read online. Enjoy.

As far as returns go, you won’t find one much stronger of late than that of The Magic Gang. With ‘Think’ – the blushing first single taken from their much anticipated second record – Kris, Jack, Paeris and Gus reminded everyone what made everyone fall in love with them, timeless pop discernment, breathless harmonic fortitude and undeniable charm. While retaining everything that allowed them to establish themselves, their second record possesses such growth in arrangement, musicianship and broadened taste that they sound like a group just relishing the opportunity to build on their catalogue.

Your first record was a culmination of years of tinkering and crafting your sound – I imagine this time around it almost felt like a focused creative spurt in comparison?

Jack: Yeah, with the second album you definitely get the feeling that you are writing something, that you go away to write an album. So compared to the first one, where you just spend a few years being in a band with your mates and you record the best songs you have, this definitely felt like it was time to go away and write, see what we could come up with. So it feels like more of a concise project just in that sense. It’s really nice to be able to catalogue a piece of work like that, it makes it easier to understand the album when you are in one headspace while you are writing it.

Was there anything necessarily that you set out to achieve with the new record, both musically and as a group?

Kris: I would say we wanted to do something different from the first album, I think we tried to make it more concise, I think we wanted to try and be quite disciplined with the length of the record, just making sure it was still quite lean in a way. I think we’ve achieved that.

Jack: Our mission statement with this one was to try and be a little bit more honest when it came to the lyrics. With the first record it felt like we were following pop sensibilities, a lot of the music we listened to was straight forward pop from the 60s and 70s, so lyrically everything led towards that sort of romantic sentiment. Which I still absolutely love and there is nothing wrong with brilliant love songs, however with this album we wanted to flex another muscle and try and write a little bit more autobiographically – more directly about our own lives and what we’ve been upto today. In a way I would think that would make it a bit more relatable, cause we are writing about stuff that is well and truly on the ground rather than more universal sentiments of love.

That’s interesting, because I feel sentimentality is such a core part of what appeals about your music – yet what I’ve also always engaged with as well is its laconic directness. Is it important for you to be able to find a balance of wearing your heart on your sleeve and allowing the listener to have their own interpretation?

Jack: You’ve always got to be really wary of that, because some of the best lyrics in the world are the ones that remain open to some extent and can be interpreted, and I think the biggest mistake you can make is telling people what your lyrics are about too much. I think there is a beauty to writing a line or a sentence that can be interpreted in many different ways.

Kris: Even though the first album was quite direct lyrically and quite tangible – in hindsight it also does have an air of vagueness to it. But with this one, lyrically it’s specifically about certain things, what those things are aren’t just about relationships with people. I think what we’ve done with this one is a lot more atmospheric and it’s not as obvious what everything is about, but I think that’s in a good way. There is an opportunity to consider the lyrics a bit more and realise it’s not just a love song.

Do you feel it’s important for acts to make grand statements in the way they change their sound from album to album or project to project?

Kris: The thing with that is you can’t be massively in control of what people will think about it in that way, so you have to express it in a way that makes sense to you. There’s a lot of areas on this album that are a lot more self-aware than what we’ve done before, and that’s quite exciting. I think a lot of people might be surprised by some of the feelings or sentiments, and it’s something that we’ve arrived at organically over a few years.

Jack: I think there’s a danger in people trying to drastically change their sound – I think you have to remain anchored in what it was that made people like what you’ve done before, or what you liked about it, recognise it and keep that sensibility. However, I do also think that if I listen to someone’s second album, I expect it to be a step up or to have developed in some way. So I think there is an important balance between keeping the essence of what makes the band good, or what made the last album special but then not repeating yourself for the sake of retaining that or to get the same response again.

‘Think’ is a fantastic statement of a first single – a notable change that still possesses the famous Magic Gang melody so to speak – it’s quite immediate isn’t it?

Kris: It’s probably quite immediate cause it was written quite quickly, so I imagine it feels instinctive. It is typical in the sense of it has a big chorus, it’s just with this song it’s a lot darker in places. It digs a lot deeper into our influences and it’s a bit more minor, the verses are a bit moodier, and it was quite exciting to hear ourselves actually conveying a tangible mood in a song.

With the instrumentation as well, the brass involved feels like something we weren’t expecting but now can’t be without – did it just feel right to broaden your sound in this way?

Kris: Again I personally love really grandiose music, so to have the opportunity to have horns on the record was really exciting for me. There are some strings on there too, some quartet stuff, some more keyboards, it’s about trying to make what’s best for the song.

Jack: With the horns, a part of me was thinking “God why didn’t we put this sort of arrangement on the first record” or “why haven’t we tried this before?” but then another part of me is thankful we haven’t because It’s nice to use something that you haven’t overused until now. It was one of those things where you want to show your development, your experimentation, but you don’t want to go off the rails with what it is that you like about being in a band and what you do.

I’ve always felt your music possesses this timeless authenticity – no doubt from your knack at writing not only melodically but empathetically also. Where do you feel your music stands in the hyper rushed nature of modern life?

Kris: I think, for me personally, I have to try not to think about stuff like that because it’s insane, it makes you feel paralysed when you want to make music. I really hope we have our own lane so that we’re not comparing ourselves directly to someone else. I feel like the more you let outside influences inside the process, I’ve never often found that that’s been conducive to making good music, dwelling on that can be a big hindrance to people making their own music.

Jack: I think it’s really important to have some sense of humanity and positivity in anything you are going to put out. Even on a very basic level, the fact there is positivity in what we’re doing, that’s quite important to us. It’s not something we talk about a lot, but I think underneath the surface that is there. We do feel proud and happy, there is a positive message to the music. We do feel over the moon that people come to our shows to dance, to have a good time and to meet future best friends. It’s the kind of thing where when you are touring for a long time – you don’t take it for granted but you forget that it’s there – the minute you stop doing it and you have a moment to reflect like we have done for the past year, then you feel incredibly proud that that’s what people do at your shows. I don’t know how that falls in line with the rest of the world, but the fact this little thing that we’re brewing is being construed as positive is important to us.

This interview originally feature in Issue Twenty-Four of So Young. Illustration by Mariana Malhāo