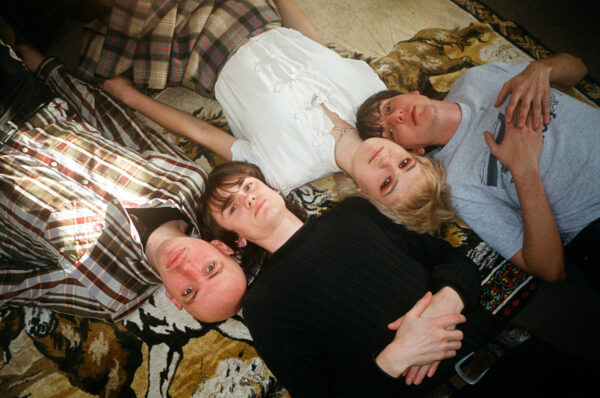 Manchester’s Blanketman are leading some form of cultural renaissance up in that neck of the woods, and you’d be a fool to ignore it. For a city with such a rich tradition of producing era-defining bands, recent years have been comparatively thin on great bands coming out of the city and onto the national stage – so it feels the time is ripe for an explosion. Enter, then, Blanketman, the fresh-faced quartet that have set tongues wagging in recent months.

Signed to [PIAS] early on, they serve up a particularly sanguine form of post-punk that upon tasting, is both sharp yet sweet on the old audio palate. Fantastic debut ‘Taking You With Me’, an ode to the existential fear of ageing we can all fall prey to, mixes the somehow-optimistic guitar lines of The Smiths with the vitriolic vocal sneers of an early Mark E Smith, and still manages a nod to the angularism of the Talking Heads in one fell swoop. It’s a wicked debut, and one that set the scene perfectly for what was to come.

Follow-up ‘Beach Body’ ups the tempo, as incessantly looping guitar and drum lines loop together behind vocalist Adam Hopper’s sardonic refrain ‘Lift off! Lift off!’ – the press release likens it to early Blur, but to this listener it sounds more like a New York, Parquet Courts / Bodega-type uneasy danceability, all monotone vocal verses and tech-y dazzle that maintains its’ integrity even as it swoops into effervescent chorus.

Recent single ‘Harold’ sees the band finding their feet properly, adding an infectious pop edge to the track that leaves the feet tapping as it keeps your mouth “aaaah-ahhhhhh”-ing to the point of sickness. Some super clean drumming and constant guitars keep the whole operation tight and to the point, but glimpses of unabashed joy creep through, nonetheless. Should live music ever happen again, expect to hear this track as you drink cheap cider, with the sun going down over a large field.

Ahead of their phenomenal ‘National Trust’ EP penned for release next year, Blanketman have that sunshine-optimistic feeling about them that the best is yet to come, and with endorsements from the likes of Steve Hanley (who’s joined them on stage several times), it’s obvious that a lot of people also feel that way. As mentioned above, Manchester has been due for an seismic musical eruption for a while now, and with bands like this leading the way, we’re definitely on the cusp.

Header photo by Through The Eyes of Ruby