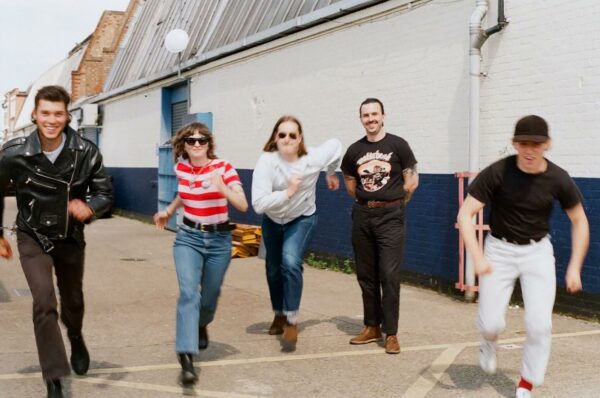 West-London pedigree gutter punks Chubby and the Gang are single-handedly making rock ‘n’ roll fun again. In a world where their label mates can flirt with Grammy nominations and arena tours, and in an industry seemingly intent on finding out how many times the words ‘post-punk’ can be uttered before the apocalypse, it can sometimes feel like everything has gone a bit oppressively serious. Enter, then, Charlie ‘Chubby’ Manning and his gang, whose unapologetically raw strain of ‘take-it-or-fuck-off’ scuzz shines, beacon-like, through the gloom.

Meshing the pub-indebted sound of acts like Sham 69 with the unadulterated aggression of hardcore, DIY in sound and ethos in a way that doesn’t feel tired or dated, debut album Speed Kills (now remastered and rereleased through Partisan Records (IDLES, Fontaines D.C)) is a sliver of puerile genius which manages to feel concurrently both ageless and refreshingly cutting-edge. Produced by Fucked Up’s Jonah Falco and containing thirteen tracks which scream along to a brain-rattling 28-minute runtime, the band are a genuinely unstoppable force of aggression and energy, whilst never straying into territory that feels primitive.

Album standout ‘All Along the Uxbridge Road’ is a raucous 108-second bareboned punk opus, taking no prisoners and containing no frills, and leaves the listener almost out of breath from its’ intensity, adrenaline pumping and fiending for more. Despite clearly having such deep roots in the world of hardcore and its’ varying-intensity cousins, and certainly not intending to be overtly experimental in genre, Chubby and the Gang never come across as formulaic, evidenced particularly on tracks like the hauntingly brilliant “Grenfell Forever”, which finds Manning shift towards a Billy Bragg / Strummer hybrid in tone and style of delivery. Similarly, in lyrics like “The mist rolls off the Thames / A blanket of fog on the docks / An old light flickers in the tower blocks / The old men singing songs / In the bottom of their glass / If you wanted me to stay you would only have to ask”, we are shown that Manning is not hiding a lack of lyricism under the freneticism of other tracks.

Chubby and the Gang are, somehow, a breath of fresh air. Maybe it’s the fact that it’s happened so organically, with ‘Speed Kills’ recorded over two days, and a US tour booked off the back of just a single? Maybe it’s that they apparently have little to no interest in ever adding a ‘post’ to the punk they play? Or maybe, just maybe, it’s because they are the synthesis of brilliance in simplicity? Chubby are masters of fun, loud music that doesn’t need to excessively flex its’ academic nature for it to be enjoyed, working more on the way it makes your body move than your brain. And in this visceral atrocity of a world, we may need bands like that more than we think.