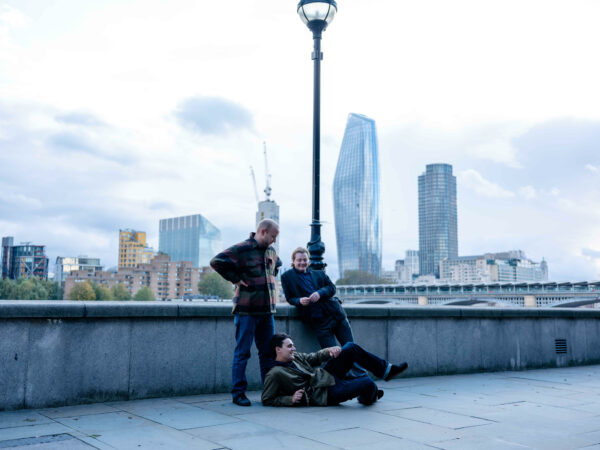 With the current state of the world, are we really surprised to find a premium on artists sounding on the brink of complete mental and physical collapse?

London trio Famous are the soundtrack to the comedown; it’s 6 AM on Monday morning and you’re in the kitchen of a stranger, with your 9 AM office cubicle looming ever closer. Except it’s not just this Monday, it’s your life, it’s the gnawing sense of paranoia that comes with feeling the hours of your existence tick away with only full ashtrays and a mounting pile of bottom-shelf vodka bottles to show for it. This is not to say that Famous are the sound of hedonistic nihilism, but more the acceptance of the dark pools of excess remaining as the sole respite of the broken.

2019’s Debut EP ‘England’ was a real shot in the arm. Six tracks of the purest, military grade nervous energy that dabbled in the angular whilst also, on tracks like ‘Forever’, showing their capacity for anthemic melody. Standout track ‘2004’ also holds weight as one of the most rawly honest tracks you could hope to hear, and manages to transform the sound of heartbreak into something strangely euphoric in its’ cathartic brilliance.

Constantly pivoting and evolving, the follow-up single ‘I Want to Crawl Inside of You’ remains their most danceable number, all thick synths, swaggering bassline and funk guitars. Still though, there is that uncanny valley of contrast so characteristic of the band, as lyrically it concerns the boredom and seething frustration of late-stage urban adolescence, with lines like “I want to see the evening through / I want to Crawl Inside of You / What do I have to do for you / To Pull out all my teeth” particularly striking.

New single ‘Nice While it Lasted’, released through the always excellent untitled (recs), is a storming explosion of sonic and lyrical neurosis, as thumping bass is overlain with an assault of screeching guitar and intermittent, futuristic bursts of noise. Vocalist Jack Merrett’s haunted lyrics veer from low muttering to a pleading, fevered cadence as he refrains “Please try not to die”. Written as a direct response to the experiences had by the band in recording their ‘England’ EP, it is the sound of the final roll of the dice,  a desperate cry into the night with no expectation of a response – the call is merely a necessity, because what it contains is too vital and too real to keep within.

In a time when the ‘post-punk’ musical umbrella is both so broad and so prevalent, it is almost shocking to find acts capable of taking and subverting the trend in a way that feels completely fresh and not at all ‘by the numbers’. With this new single, Famous have marked themselves out as a genuinely exciting prospect, capable of taking that next step of being a buzz band for art students, to the heights reached by acts like Black Country, New Road and black midi (who, coincidentally, Famous have toured with and supported respectively). Famous are riding the crest of a long wave of brilliance and on current form, it seems that wave is about to break.