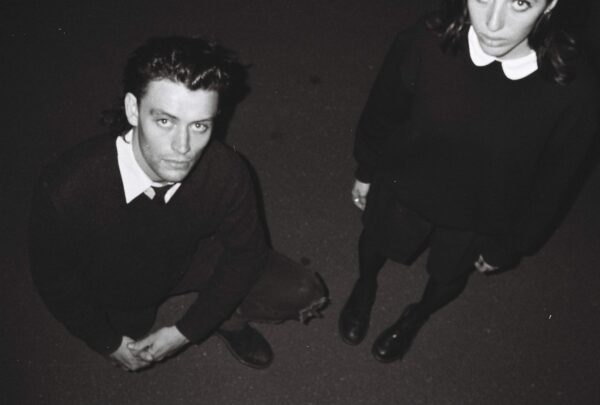 The term ‘Melbourne band’ immediately conjures the vision of either gutter-punk fury or sludgy psychedelia, having birthed some of the most influential acts on the planet within each genre since the turn of the century. HighSchool belong to neither camp, however, creating a curious blend of post-punk grit and hedonist-romanticism more typically associated with a cynicism-saturated rainy metropolis than the sunny sprawl which birthed King Gizzard and the Lizard Wizard.

Formed at the start of 2020 and rehearsing in a storage container in the Melbourne suburb of Brunswick, HighSchool (initially named Rosary) evolved from two-piece to trio as their bassist ran out of money in Poland and had to return to his motherland. Soon offered was debut single ‘Frosting’, released earlier this summer. A masterwork of melancholic pop, it effortlessly covers nostalgic synth lines and lo-fi vocal effects with a slather of jangly guitars. Part guilty pop pleasure, part textbook lament to lost love, it was immediately obvious the band were a Pitchfork-blogosphere wet dream.

New single ‘New York, Paris and London’ finds the trio in searingly sentimental form, and proves they are more than just something for the heathens of the blogosphere. With melodic guitar lines reminiscent of The Smiths at the height of their angst-ridden powers underlain by the powerful industrial bass rumblings of a sun-drenched Joy Division, and lyrics like: “Oh let me live my lie / Oh the rest of my life / I’ll spend it all with you tonight” – it certainly becomes clear that HighSchool are not aiming necessarily for the most abrasively original ideas to ever grace the stage of indie music. Rather, their goal is to create an amalgamation of the best of what has come before, and through combination create something that can still feel fresh and vital without necessarily tearing up the rulebook.

There is also the matter of aesthetics – the band are almost definitely self-aware enough to realise their status as some of the most beautiful musicians on the planet, whilst both ‘Frosting’ and ‘New York, Paris and London’ are the subject of glorious monochrome videos directed by Rory Trobbiani.  HighSchool could almost be described as continuing the tradition of acts like DIIV and Girls, who created bittersweet, emotive pop music containing pretensions of art and stylisation but with enough nuance and substance behind them to separate them from many of their contemporaries who wound up in the ‘indie landfill’ classification.

If there’s some form of silver lining that can be drawn from this COVID shitshow of a world at the moment, it’s that it seems to have allowed bands like HighSchool to form and emerge into a world where most established artists are desperately trying to delay releases, allowing newcomers to take the stage. Now signed to Dalliance Recordings, with an EP recorded at their home studio expected in early 2021, we can look forward to more unashamedly hook-driven art pop elation. It’s music that makes you feel good to be alive, and Isn’t life better when you have something to look forward to?

The brand new issue of So Young is out now with Goat Girl on the cover. It’s sold out in print but you can read the digital edition below.