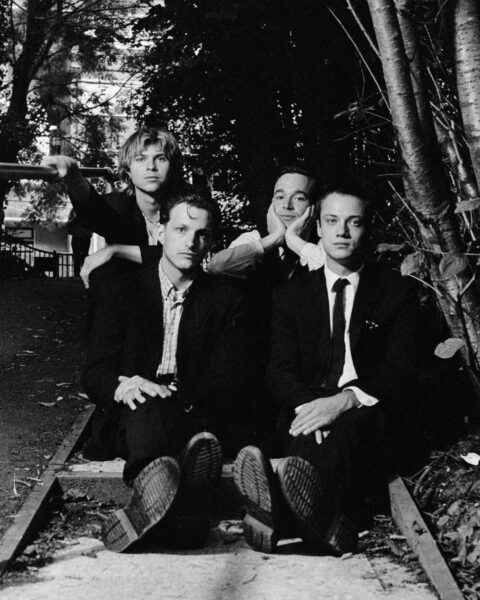 Perhaps simply by virtue of the fact that they’re not a world-touring, chart-infesting act, there is a case that could be made that Legss are one of the most underrated acts to grace the British musical landscape of today. Theirs is a world of humour and intrigue, metamorphosing an endless drizzle of a life lived in singular, tired days into the irregular – fuelled not by self-righteous fury or scorn – but merely the sheer surrealism of its’ drudging normality.

Having “formed in the Five Bells pub, in the rain, next to a cat, on a wall, and then immediately disband[ing], citing ‘creative similarities”, the band soon produced their first EP, the aptly-named ‘Writhing Comedy’. A four track laying of the gauntlet, we as listeners are exposed to an abrasive mastering of the loud/quiet dynamic, as the work dips its metaphorical toes into the waters of beauty, before veering abruptly back into the harshest of real life lyricism. Not quite art-rock, definitely not quite post-punk, the EP is the sound of a band carving their own niche into the bloated underbelly of the world, then dissecting themselves in a scarlet-tinged frenzy.

There is a certain unabashed cynical literacy to the group – not least showcased through the production of their book ‘Good News Horse’, a darkly humorous uncanny valley satirising, among other topics, the hilarious treachery of the life lived by every socially switched-on, UAL-attending Black Country, New Road listener. Whilst the pastiched ‘uphill both ways’ nature of the scripture is not segmented from their music in any manner, how many other bands can you think of who have the scope of ambition and breadth of vision to release a genuinely fantastic book in between two self-funded, self-released EP’s?

However, the true span of Legss’ capacity for observational wit – delivered through a mixture of lilting spoken word and hoarse spasms by frontman Ned Green – is truly displayed on 2020’s ‘Doomswayers’ EP. Whilst there shall always be naysayers whenever an act sticks its’ head above the parapet of what has come before, the band are undoubtedly self-aware; indeed, “imagine being lectured by bands like ours that do nothing”  is a near-opening line from ‘Doomswayers’ opening track – there is a certain knowing-wink in their output that suggests it pushes them to self-edit and refine to brilliance, rather than ever delve into masturbatory self-aggrandisement.

And brilliant it is! Expanding their sonic palate from their first, ‘Doomswayers’ is a twitching and twisting wormhole of sampling and heavy synth work, overlaying their trademark guitar-stab angularisations and tight-wound percussion to amalgamate to something completely unorthodox and completely unpredictable, yet similarly danceable – and in doses – heart-rendingly beautiful. “If I was an American my experiences, they would have shaped me / but because I’m British they only make me tired” – the band have a knack for expressing collective subconscious in a manner that feels personal yet universal, and in this age of media over saturation, that is no mean feat. That is, when they’re not painting the scenario of a Parisian meeting with Huw Stephens, in which he confesses his absolute hatred of all music.

Despite this, the aforementioned scenario involving Mr. Stephens I feel absolutely captures the heart of what Legss are about. Completely, certifiably, maniacally insane, but caught on some Hellerist snag which allows them to mould it to suit their purposes and carry them onwards, even as they themselves have no idea where it leads. Welcome to the age of the bystander, indeed.

Photo by Will Reid