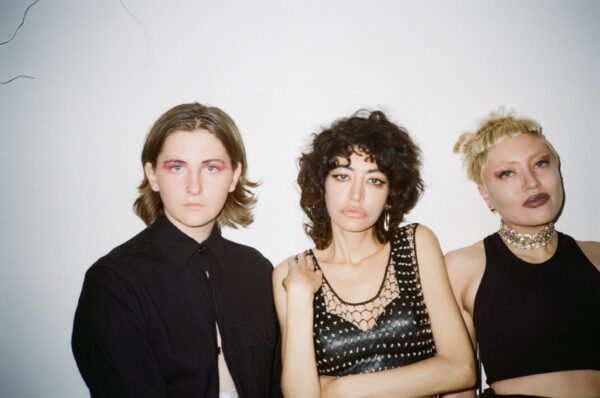 deep tan are a cyclone, emerging from the fatalistic side of life with a flash of cynicism and a rumble of venomous intent. Simultaneously bitingly focussed and indulgently apathetic, the Hackney-based trio’s combination of understated melodic sweetness and cold-wave rhythm has found them compared to the likes of Foals and The Cure, even as they pivot further towards their own formula of the strange and occult.

Debut single ‘Air’ provided early indicators of the ethos and directive of the band, all atmospheric guitar lines and glam-expansive drums. Whilst the track (and its’ fantastic fever-dream video) still holds up, when compared against their more recent releases, it is (naturally, for a first single), the sound of a band finding their feet and getting to grips with the musical landscape whose peripheries they were entering.

The speed of progression, then, that takes us to the release of AA-side release ‘Shimmer’ and ‘Constant Inconsistencies’ later in 2019, is shocking. ‘Shimmer’ has all the rippling guitar textures and timely bass tones of early Warpaint, but soon replaces diaphanous haze with brooding darkness and oozing cool. As listeners, we are taken on a journey downwards, layer by layer, only to emerge in an ethereal haze of ghostly harmony sure to set the hairs upon the back of your neck on end. Like a photographic negative, ‘Constant Inconsistencies’ is a mesh of sardonic laughter and sneering lyrics “You come with one guarantee / Constant inconsistencies” lain over a driving bassline, life-support guitar stabs and tight, sparse drumming. It’s part post-punk motorik, part grunge sludge, and with a runtime of just 102 fantastic seconds, almost obnoxiously to the point.

New single ‘deepfake’, released via Practise Music, provides an examination of the curious culture of Deepfakes (synthetic media in which a person in a video or photo is replaced with the likeness of another), and the manner in which they’ve been (unfortunately, predictably) mainly used to simulate porn of female celebrities. The track further strips away the lightness found on their first single, and leaving a much leaner, darker sound behind – perhaps suggesting they’ve found their artistic footing properly now.  It is the sound of disgust and frustration at the ease with which women can be digitally degraded non-consensually, and the popularity of such media. Vocalist Wafah’s capacity to slip seamlessly between French and English lends itself brilliantly to the track, conjuring the feeling of surreal ambiguity so symptomatic of the subject matter, whilst retaining a certain conviction that keeps a listener firmly rooted in the ‘real’ world.

With their off-kilter musicianship, penchant for the murkier side of life, and genuinely exciting method of creation, it feels as if only apocalypse or YouTube community guidelines – which has continually thwarted their efforts to exhibit their hyper-NSFW ‘deepfake’ music video – can stop deep tan now. They are a cyclone, and when it rains, it is sure to pour.

The brand new issue of So Young is out now and we speak to deep tan inside. It’s sold out in print but you can read the digital edition below.