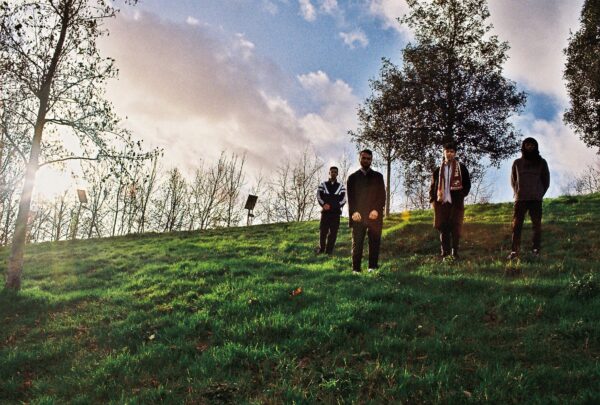 The word ‘collective’ is bandied about a lot these days – often synonymous to a quick source of free creative labour – but London quartet Folly Group aren’t here to fuck about. Formed after a drunken train ride and a realisation that being musicians living together is going to take you in one direction, they’ve been doing the rounds on London’s sweatbox circuit for a while now, and have now digitally released two of the most meticulously brilliant tracks of the year.

January’s Debut release ‘Butt No Rifle’ is a glorious ode to a lost past, an angular triumph of jagged rhythms and precision guitars which lands somewhere in the realm of Crack Cloud, with sudden breakdowns, rhythm changes and dogmatic lyricism at the fore. There is a very particular sound we’ve seen emerge as the frontman-drummer has risen to prominence within certain DEVO-loving circles of indie music, but in Sean Harper Folly Group have someone who matches the nervous, frenetic energy of the music with a sharp wit and commandingly atmospheric tonal shift.

When held against their debut, ‘Fewer Closer Friends’ finds the band shifting gears, with hardtek synth stabs and digital maximalism overlaying the constantly evolving drum patterns and vocals which veer from numb detachment to chanted chorus. Topically pondering the lack of control a human has over another’s perception of them, it finds Harper conversely in hellish introspection as the sonic maelstrom whirls around him. Also essential watching is the absolutely insane cyber-psychedelic video (featuring a computer-rendered man headbutting leopard, because why not?), spliced somewhere between a futuristic digitalism and ps1-era graphics – I would describe it as Elon Musk’s final fever dream before becoming a super-villain, if that gives any idea of the level it’s on.

What makes this band excel is in the combination of abrasiveness and anthem, showcasing an ability and willingness to plumb the depths of the uncomfortable and difficult, and emerge with something oddly melodic and accessible. They have clearly put so much thought and effort into to capturing the bizarre brilliance of their live show to record, and to have done it in such a way that doesn’t scream ‘compromise’ is an achievement in itself. In this cruel, cruel world of drummer-vocalists and endlessly growing collectives, Folly Group shine through as a refreshing beam of artistic clarity and legitimate musicianship. With only two tracks released into the world, it feels like their best is right around the corner – and with each listen, I become more and more intrigued to see what that best is.